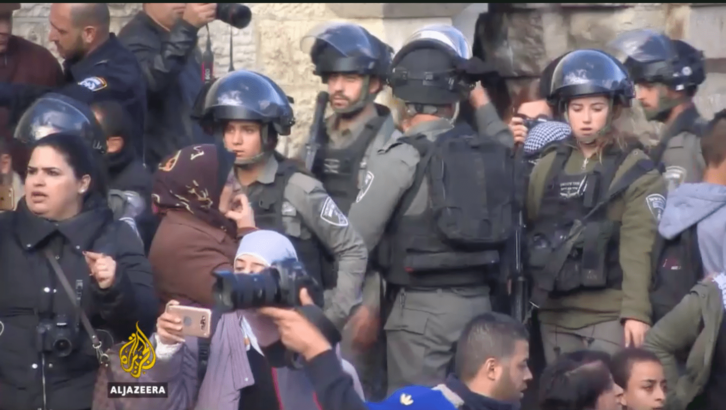 Israeli forces have killed two Palestinian protester and injured 300… Trump signed waiver to postpone moving embassy, just like previous presidents, who had also promised to move it (video)….Original legislation to move US embassy was passed with bipartisan support, including from Biden, Kerry, etc… JTA reports all major mainstream Jewish groups support Trump announcement, some smaller ones oppose the timing…

CHECK BACK – This post will be UPDATED as events occur…

The latest information is here.

Haaretz and IMEMC report that Israeli forces have killed two Palestinian protestors in Gaza, and IMEMC reports that over 700 have been injured, including an infant who was shot with a rubber coated steel bullet, as tens of thousand protest President Trump’s announcement stating that Jerusalem is allegedly the capital of Israel. (View Al Jazeera video report here.)

Palestinians are participating in a general strike across the occupied territories.

A few hours after his announcement about Jerusalem, Trump signed the usual waiver postponing moving the US embassy away from Tel Aviv – just as previous presidents have done. The US Congress passed legislation in 1995 requiring the embassy to be moved to Jerusalem – Joe Biden, John Kerry, Dianne Feinstein, etc were among the 76 co-sponsors in the Senate from both parties. Clinton, George W Bush, and Obama all waived the move on the basis that it would be damaging to national security – as Trump did 6 months ago and again yesterday.

“Supreme Court Justice Stephen Breyer, who is Jewish, was also at the reception, donning a kippah. Breyer was appointed to the high court by former president Bill Clinton…” (Jewish Insider report is here.)

According to JTA’s report How Jewish groups are reacting to Trump’s recognition of Jerusalem as Israel’s capital: the largest mainstream Jewish groups welcomed the announcement,” whlle some others felt it was too soon. Below is a roster from JTA’s report:

Groups who support Jerusalem as the capital of Israel but who feel this is not the right time: