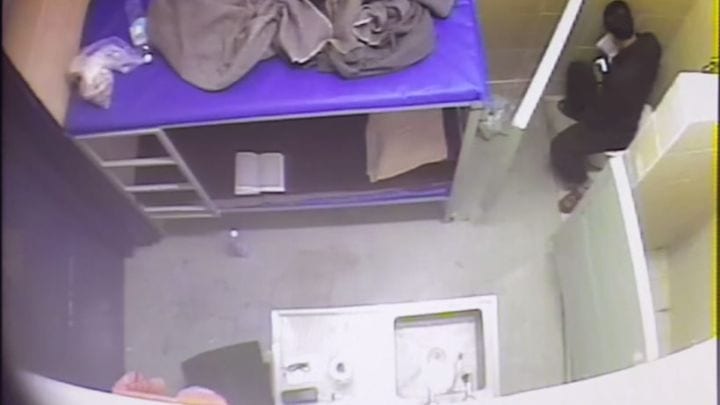 The part of the video released on Sunday that shows Barghouti eating does not have a timestamp on it, yet American media jumped to cover the story—even though they’ve reported little else on the hunger strike since it began on April 17.

At a press conference Sunday night, Marwan Barghouti’s wife said, “The fabricated video shows the defeat of the occupation before the prisoners’ steadfastness. We expected nothing else but psychological warfare.”

This apparently is not a new tactic of Israel’s. Via Ha’aretz:

Back in 2004, Barghouti wrote [in his book], Israel disseminated a photo of him eating during a hunger strike, in an attempt to show other prisoners that “the leader of the strike is eating, and you are starving.” The photos, he argued, were taken by surveillance cameras before the strike had begun.

According to the Times of Israel, the Israeli Prison Service planted candy in the Barghouti’s and other prisoners’ cells and hoped to “catch” them eating on secret cameras.

An unnamed IPS official told Channel 2 on Monday that video clips of Barghouti eating, leaked a day earlier, were obtained as part of an IPS scheme to induce the hunger strike’s leaders to eat by hiding food in their cells. Most of them, however, resisted the temptation, the official said.

Public Security Minister Gilad Erdan appeared to confirm that the footage of Barghouti was obtained as part of a setup, acknowledging that it was highly unlikely that Barghouti could have acquired the food himself while in solitary confinement.

In an interview with Army Radio on Monday, Erdan also said that the IPS has been taking a number of measures in order to undermine the hunger strike, but refused to go into detail.

There seems to be no bottom to the abyss Israel is willing to sink to in its desperation to save its public image against the current Palestinian hunger strike….

There are multiple problems with this footage, beyond the very real possibility that it is fake. A Palestinian prisoner’s advocacy group is saying that the footage is not recent and possibly even a decade old.

But let us return to the technicalities later, in order to address the real moral abyss here – the absolute shamelessness of Israeli propaganda. Those who eat that propaganda raw, and even with glee (like Jewish Press), are the real story here.

I mean, let’s just think about this whole thing first, morally. A society, with its top security officials and prison apparatus, is willing to air footage of a prisoner in a toilet. And for what? In order to weaken a hunger strike…

Israel is obviously desperate – and has already spoken of bringing in foreign doctors in order to force feed the prisoners, as the Israeli Medical Association is refusing to take part in what its chairman unequivocally calls “physical torture”.

But is there a doctor out there that may ever be able to heal the sick Israeli society, led by populist propaganda ministers that have not a shame in the world?

Read his full commentary at Mondoweiss.