You Are Here: Home → The Intolerable Hypocrisy of the American Jewish Congress

The Intolerable Hypocrisy of the American Jewish Congress 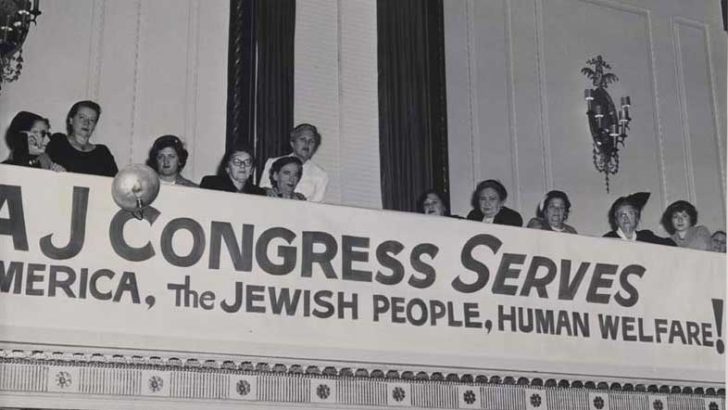 This series of correspondences between Jeremy Hammond, editor of Foreign Policy Journal, and members of the American Jewish Congress PR team illustrate the AJC’s doublespeak: claims to respect Palestinians’ rights while simultaneously lauding the ethnic cleansing by which Israel was created.

On the 100th anniversary of the infamous “Balfour Declaration” of November 2, 1917, in which the British government pledged support to the Zionist leadership in Europe for their project to colonize Palestine, as editor of Foreign Policy Journal, I received a press release from the American Jewish Congress celebrating the occasion. It read as follows:

The American Jewish Congress reiterates “its deep and abiding commitment to ensuring the survival and security of Israel” on Balfour Centenary.

As Jewish communities across the world celebrate the 100th anniversary of the Balfour Declaration which paved the way for the birth of the State of Israel, the American Jewish Congress would like to reiterate its deep and abiding commitment to ensuring the survival and security of Israel. As US Congress prepares to vote on the introduction Friday of a resolution in support of this momentous declaration, we are immensely proud of the US administration’s enduring commitment to maintaining its bilateral ties with one its strongest allies in Israel and to defending Israel’s place as a secure, legitimate and democratic homeland for global Jewry.

The American Jewish Congress was heartened by Nikki Haley’s words prior to her swearing as US Ambassador to the United Nations when she reiterated that the US would not abstain from any UN vote that sought to “encourage boycotts of Israel”. We look to President Trump to maintain this strong stance in condemning those advocating sanctions and boycotts and who question Israel’s legitimacy.

On the occasion of the centenary of the Balfour Declaration, the American Jewish Congress shares the pride felt by America’s Jewish communities in Israel’s achievements and looks forward to the strengthening of our relationship based on shared values and co-operation in many different areas.

The American Jewish Congress is committed to ensuring the survival and security of Israel, and protecting Jewish communities around the world.

That very morning, I had published my own lengthy essay explaining how the British, via the policy set in motion with the Balfour Declaration, facilitated the Zionists’ ethnic cleansing of Arabs from Palestine, which was the actual means by which the “Jewish state” came into existence.

So I replied to the American Jewish Congress’ PR person, Shari Ryness:

Here is Foreign Policy Journal’s contribution to the discussion of the Balfour Declaration with arrival of its 100th anniversary.

What Was the Balfour Declaration of 1917 and Why Is It Significant?

The Balfour Declaration determined British policy under the League of Nations’ Mandate, which ultimately facilitated the ethnic cleansing of Palestine.

I hope the American Jewish Congress also considers the Palestinian perspective to be important to consider for your work, and that your organization respects their equal rights.

Quite to my surprise, Shari replied:

Thanks very much for sharing. The American Jewish Congress considers everyone’s rights to be important and I look forward to sharing other aspects of their work with you in the future.

To which I responded:

Thank you for the kind response. However, I am confused by your statement that you consider the Palestinians’ rights to be important, in light of the AJC email’s celebration of the Balfour Declaration, which facilitated the ethnic cleansing of Palestine; celebration of the US’s support for Israel, given how the US enables Israel’s crimes against the Palestinians (as documented in my book Obstacle to Peace); and support for Israeli settlements, established in occupied Palestine in violation of international law.

With respect, this seems to me cognitive dissonance. It is not logically possible for one to hold the views expressed in the AJC email and yet at the same time respect Palestinians’ equal rights.

My message was forwarded on, and I next received a reply from Marc Cohen, who is also evidently part of the American Jewish Congress’s PR team (also CCed were Jack Rodway and Shari):

Forgive the delayed response to your email. I am a colleague of Shari’s.

You clearly have strong views on this subject matter, which the American Jewish Congress respects, although also respectfully disagrees in some respects as well. I do not propose that this is the form to dissect fully the history of the State of Israel and the Arab-Israeli conflict, which goes back thousands of years (not merely 100). I would, though, be delighted to meet in person over coffee to discuss this further.

However, I would like to respond to your question to say that it is not inconstant [sic] to welcome the Balfour declaration and to support the establishment of The State of Israel, and also at the same time support Palestinian rights. Unfortunately this not a black and white issue and so it is not a case of all or nothing. The American Jewish Congress is passionately supportive of Israel’s right to exits and the rights of the Jewish people to be sovereign and secure in our homeland. At the same time, we also lament many of the injustices faced by the Palestinians (at the hands of Israel, their own leaders and the Arab leaders) and the fact that we seem to be on the face of it as far away as ever from finding a peaceful resolution to the conflict.

Jack Rosen would very much like to be able to write something for your pages that tackles some of the big issues facing the region and how peaceful dialogue and diplomacy by all sides can help to break the deadlock. Jack travels extensively cross the whole Middle East, meeting regularly with leaders in places like Riyadh and Doha, as well as in Jerusalem and Washington DC, and he has a unique insight into what is being discussed behind closed doors. Jack is optimistic that there is a growing rapprochement between Israel and her Arab neighbors and that there is cause for optimism that improvements can be mode both to the peace process and of course to the lives of ordinary Palestinians, many of whom suffer terribly.

More cognitive dissonance. So I replied:

Thank you for your kind reply to my expressed concern. I am grateful for the opportunity to have this dialogue with representatives of the American Jewish Congress.

However, I do not see how one can reasonably, on one hand, laud the means by which Israel came into existence, and yet at the same time say they support Palestinian rights. This is a logical impossibility. These are two opposing and mutually exclusive beliefs, given the fact that Israel came into being via the ethnic cleansing of most of the Arab population from their homes in Palestine. And, again, the Balfour Declaration determined a course of British policy that ultimately facilitated that tragic crime against humanity.

I agree this is not the forum to dissect fully the history of Israel. This was never my intent. But surely you must recognize the distinction between the kingdom that existed thousands of years ago and the state that was established in 1948 through ethnic cleansing.

Your beliefs are also premised on this idea that Israel has “a right to exist.” It does not. There is no such thing as a state’s “right to exist.” Political entities don’t have rights, individuals do. And the proper framework for discussion, with respect to rights, is the right to self-determination. And it was this right that the Zionists and the British rejected for the Arab Palestinians under the Mandate. It is this right that Israel continues to deny to the Palestinians suffering under its oppressive occupation regime to this day, as well as to the refugees never permitted to return to the homeland from which they were expelled to make way for more European immigrant Jews.

I do not share your view that we are as far away as ever to finding a peaceful resolution. I see that the world is waking up to the true nature of the conflict, and the true history of Israel’s origins, as opposed to the Zionist legends that still dominate the popular culture. Respectfully, I see that the public is catching on that when organizations like yours praise the means by which Israel came into being and yet say they support Palestinians rights, that the latter are empty words, indeed.

I invite you to read my article “What Was the Balfour Declaration and Why Is It Significant,” which documents how the British facilitated the ethnic cleansing. I think once you read this essay, you will more fully understand why I perceive your organization’s claim to support Palestinians’ rights as lacking credibility:

I re-sent that reply twice, but never received a response. (Nor did I receive any submissions from Jack Rosen.)

The “About” page of the American Jewish Congress explains how it was established by influential American Zionists including Louis Brandeis and Felix Frankfurter, who were participants in the creation of the League of Nations’ Palestine Mandate, which was literally drafted by the organized Zionists, and which incorporated the text of the Balfour Declaration.

Under the Zionist mandate, self-determination was to be denied to the inhabitants of Palestine until the Jews through mass immigration could establish a majority. Only then would democratic governance be permitted.

It is understandable, then, that the American Jewish Congress would not want to acknowledge how the policy course determined by the Balfour Declaration facilitated the ethnic cleansing of Palestine. To do so would evidently undermine their very reason for existence.

Their “About” page also boasts:

“The American Jewish Congress joined the struggle against the regime of apartheid in South Africa, campaigned to end persecution of Soviet Jews, to free the Jews of Syria, Ethiopia and Iran. It raised its voice protesting the atrocities in the Balkans in 1990s, the use of civilians as human shields by Hamas, and called for a stop to acts of genocide in Darfur and South Sudan.”

It is also not surprising that missing from this list is any mention of joining the struggle against the Israel’s oppressive occupation regime in the West Bank and Gaza Strip and its apartheid character, or voicing protest against Israel’s illegal settlement regime in the West Bank; Israel’s illegal blockade of Gaza; the Israel Defense Force’s atrocities in Gaza during Operation Cast Lead, Operation Pillar of Defense, and Operation Protective Edge, during which the IDF implemented a policy of deliberately indiscriminate force resulting in the vast majority of Palestinian casualties being civilians; the IDF’s use of human shields (during ‘Cast Lead,’ for example, while there is no evidence any civilians were killed because they were being used at the time as human shields by Hamas, there are documented instances of IDF soldiers using Palestinians as human shields); or, of course, the initial ethnic cleansing of 700,000 Arabs from their homes in Palestine by which the “Jewish state” came into existence in the first place, a crime facilitated by the policy course determined by the Balfour Declaration of 1917.

So we can see that when the American Jewish Congress claims to respect Palestinians’ rights, they are very empty words, indeed.