You Are Here: Home → Intelligence Experts to Trump: Intel on Iran Could be CATASTROPHIC 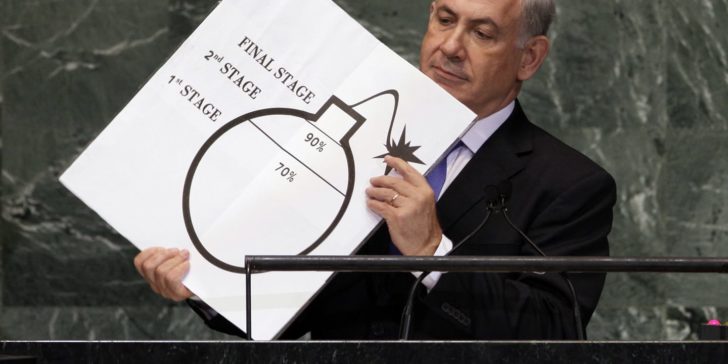 As drums beat again for war — this time on Iran—-the warning from veteran US intelligence experts is again being disregarded as it was before the Iraq debacle, and this time VIPS “fear the consequences will be all-caps CATASTROPHIC.”

The evidence displayed by Israeli Prime Minister Benjamin Netanyahu on April 30 showed blatant signs of fabrication. That evidence is linked to documents presented by the Bush Administration more than a decade earlier as “proof” of a covert Iran nuclear weapons program. Those documents were clearly fabricated, as well…

The actual documents originally came not from Iran but from Israel. Moreover, the documents were never authenticated by the CIA or the International Atomic Energy Agency (IAEA).”

MEMORANDUM FOR: The President

As the George W. Bush administration revved up to attack Iraq 15 years ago, we could see no compelling reason for war.  We decided, though, to give President Bush the benefit of the doubt on the chance he had been sandbagged by Vice President Dick Cheney and others.  We chose to allow for the possibility that he actually believed the “intelligence” that Colin Powell presented to the UN as providing “irrefutable and undeniable” proof of WMD in Iraq and a “sinister nexus” between Saddam Hussein and al Qaeda.

To us in VIPS it was clear, however, that the “intelligence” Powell adduced was bogus.  Thus, that same afternoon (Feb. 5, 2003) we prepared and sent to President Bush a Memorandum like this one, urging him to seek counsel beyond the “circle of those advisers clearly bent on a war for which we see no compelling reason and from which we believe the unintended consequences are likely to be catastrophic.”

We take no satisfaction at having been correct — though disregarded — in predicting the political and humanitarian disaster in Iraq. Most Americans have been told the intelligence was “mistaken.” It was not; it was out-and-out fraud, in which, sadly, some of our former colleagues took part.

Five years after Powell’s speech, the Chair of the Senate Intelligence Committee minced few words in announcing the main bipartisan finding of a five-year investigation. Hesaid:  “In making the case for war, the Administration repeatedly presented intelligence as fact when in reality it was unsubstantiated, contradicted, or even non-existent.  As a result, the American people were led to believe that the threat from Iraq was much greater than actually existed.”

As drums beat again for a military attack — this time on Iran, we Veteran Intelligence Professionals for Sanity and other experienced, objective analysts are, by all appearances, being disregarded again.  And, this time, we fear the consequences will be all-caps CATASTROPHIC — in comparison with the catastrophe of Iraq.

In memoranda to you over the past year and a half we have pointed out that (1) Iran’s current support for international terrorism is far short of what it was decades ago; and (2) that you are being played by Prime Minister Benjamin Netanyahu’s claims about Iran: they are based on intelligence exposed as fraudulent several years ago.  Tellingly, Netanyahu waited for your new national security adviser to be in place for three weeks before performing his April 30 slide show alleging that Iran has a covert nuclear weapons program.  On the chance that our analysis of Netanyahu’s show-and-tell failed to reach you, please know that the Israeli prime minister was recycling information from proven forgeries, which we reported in a Memorandum to you early last spring.

If our Memorandum of May 7 fell through some cracks in the West Wing, here are its main findings:

The evidence displayed by Israeli Prime Minister Benjamin Netanyahu on April 30 in what he called his “Iranian atomic archive” showed blatant signs of fabrication. That evidence is linked to documents presented by the Bush Administration more than a decade earlier as “proof” of a covert Iran nuclear weapons program. Those documents were clearly fabricated, as well.

In our May 7, 2018 Memorandum we also asserted: “We can prove that the actual documents originally came not from Iran but from Israel. Moreover, the documents were never authenticated by the CIA or the International Atomic Energy Agency (IAEA).”

There was a close brush with war with Iran a decade ago.  Bush and Cheney, in close consultation with Israel, were planning to attack Iran in 2008, their last year in office.  Fortunately, an honest National Intelligence Estimate of November 2007 concluded that Iran had stopped working on a nuclear weapon in 2003, and that key judgment was made public.  Abruptly, that NIE stuck an iron rod into the wheels of the juggernaut then speeding downhill to war.

The key judgment that Iran had stopped work on a nuclear weapon was the result of the painstakingly deliberative process that was customarily used, back in the day, to produce an NIE. After that process — which took a full year —  the Nov. 2007 NIE was was approved unanimously by all U.S. intelligence agencies.

(In other words, it was decidedly NOT a rump “assessment” like the one cobbled together in a couple of weeks by “handpicked” analysts from three selected, agenda-laden agencies regarding Russian meddling. We refer, of course, to the evidence-impoverished and deceptively labeled “Intelligence Community Assessment” that the directors of the FBI, CIA, and NSA gave you on January 6, 2017. The Defense Intelligence Agency and the State Department intelligence bureau were among the other 13 agencies excluded from that “Intelligence Community Assessment.”)

As for the Bush/Cheney plans for attacking Iran in 2008, President George W. Bush, in his autobiography, Decision Points, recorded his chagrin at what he called the NIE’s “eye-popping” intelligence finding debunking the conventional wisdom that Iran was on the verge of getting a nuclear weapon.  Bush added plaintively, “How could I possibly explain using the military to destroy the nuclear facilities of a country the intelligence community said had no active nuclear weapons program?”

Mr. President, we do not know whether a fresh National Intelligence Estimate has been produced on Iran and nuclear weapons — or, if one has been produced, whether it is as honest as the NIE of Nov. 2007, which helped prevent the launch of another unnecessary war the following year.  We stand on our record.  In sum, if you believe that there is credible evidence that Iran has an active secret nuclear weapons program, we believe you have been misled.  And if you base decisions on misleading “intelligence” on Iran, the inevitable result will be a great deal worse than the Bush/Cheney debacle in Iraq.

– For the Steering Group