In first, ‘Palestine’ to head bloc of 134 nations at UN 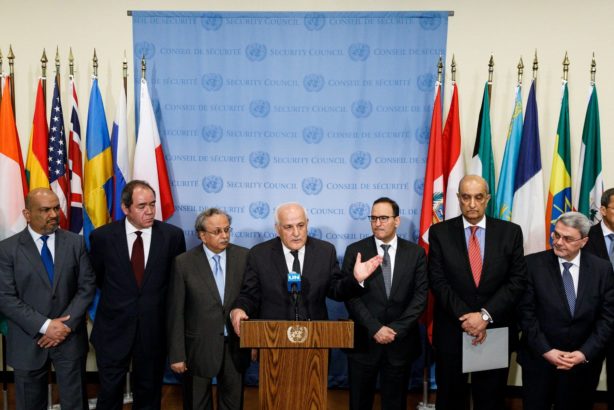 A UN bloc of 135 countries, 80% of the world’s population, has chosen the State of Palestine as its next leader. The US and Israel object. Palestine sees it as part of the road to statehood, in lieu of peace talks which have been indefinitely stalled.

The biggest bloc of developing countries at the United Nations has chosen the observer state of Palestine as its next leader, the Palestinian ambassador said Tuesday, a decision that could cause new tensions with Israel and the United States.

The ambassador, Riyad H. Mansour, said in a telephone interview that Palestine would take over leadership of the bloc, known as the Group of 77, from Egypt, starting in January.

Originally 77 countries when formed in 1964, the bloc’s membership has nearly doubled in size. The bloc often speaks as one voice in the General Assembly and represents more than 80 percent of the world’s population.

“We will be negotiating on behalf of 135 countries,” Mr. Mansour said, a total that would include his own delegation.

Symbolically at least, the choice of Palestine as the Group of 77’s leader is a diplomatic rejoinder to Israel and the United States in the protracted Israeli-Palestinian conflict, and a political advance for the Palestinians.

Israel and the United States, Israel’s most important ally, have argued that the status of the Palestinians at the United Nations does not mean that there is an independent state of Palestine, and that only direct negotiations between the Israelis and Palestinians can achieve such an outcome.

Both countries opposed the Palestinian mission’s elevation in 2012 by the General Assembly from an entity to an observer state, the same status given to the Vatican. They also opposed the decision in 2015 granting the Palestinians the right to fly their national flag at the United Nations headquarters.

An observer state cannot vote on General Assembly resolutions but enjoys other privileges, including eligibility for membership in important United Nations bodies like the International Criminal Court and Unesco.

The Palestinians have argued that since the Israeli-Palestinian peace process has been stalled for many years, they have no choice but to proceed in other ways in their quest to gain statehood.

The Palestinians also have grown increasingly alienated from the United States under the Trump administration, which enraged them in December by recognizing the contested holy city of Jerusalem as Israel’s capital.

The Palestinians want to make East Jerusalem their future capital and have said the United States can no longer be considered an impartial arbiter in their conflict with Israel.

The administration has since moved to sharply cut American funding to the Palestinian population in Gaza, the Israeli-occupied West Bank and elsewhere in the Middle East, including the United Nations agency that was established to help displaced Palestinians after Israel’s creation in 1948.

Nikki R. Haley, the United States ambassador to the United Nations, frequently rebukes the organization for what she sees as its anti-Israel bias on the Palestinian issue.

Ms. Haley also has criticized other Middle East nations for what she has described as their failure to help the Palestinians and advance peace with Israel — a point she reiterated earlier Tuesday at a Security Council meeting.

“It is time for the regional states in particular to step up and really help the Palestinian people, instead of just making speeches thousands of miles away,” she said.

The United States mission did not immediately respond to requests for comment on the Group of 77 development. In an emailed statement, Israel’s ambassador, Danny Danon, was strongly critical.

“The goal of the Group of 77 originally was to facilitate the economic advancement of underdeveloped nations,” he said. “It is unfortunate that it will now become a platform for spreading lies and incitement. This will not promote the G-77’s goals, and encourages the Palestinians to not engage in negotiations for peace.”