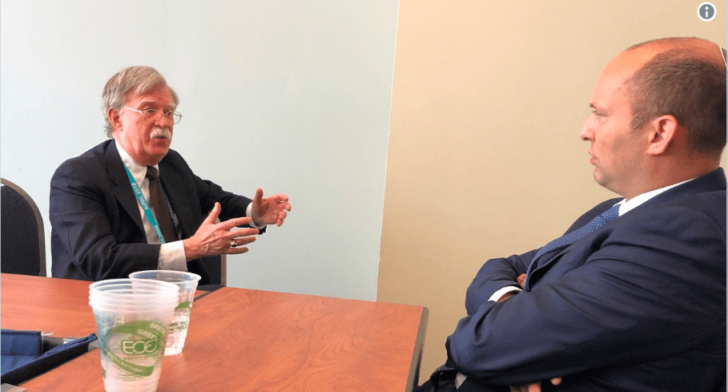 Photo of John Bolton with Israeli Minister Naftali Bennett, featured in recent tweet by Bennett. Bolton is an outlier even among Republicans – his appointment had been fiercely opposed by many within Trump’s inner circle, most notably the coterie of military officers surrounding the president.

The Times of Israel reports: “Two ministers from the right-wing Jewish Home party and another from the ruling Likud party congratulated former US ambassador to the UN John Bolton on Friday for his appointment as US President Donald Trump’s new national security adviser.

“Education Minister Naftali Bennett tweeted that it was a “great appointment” and that Bolton, considered a foreign policy hawk who is opposed to the Iran nuclear deal, was a “stalwart friend of Israel.” Read full article

“In addition to AIPAC, groups that lobbied in 2006 for his confirmation as U.N. ambassador included the American Jewish Committee, the Anti-Defamation League, the Orthodox Union, Agudath Israel of America, the Zionist Organization of America and the Republican Jewish Coalition. The Conference of Presidents of Major American Jewish Organizations quietly encouraged the endorsements.”

“ZOA’s Mort Klein, who led an aggressive campaign to oust McMaster last year, tells us… ‘ZOA called for the ouster of McMaster because of his hostility toward Israel, because of his support of a Palestinian terrorist state, frankly, and his sympathy for radical Islam. When I wrote my op-ed and press release calling for his ouster, I got calls from some of my friend in the White House, who told me Trump saw this and because he was already thinking this way, this has motivated him to move in that direction. I was told several months ago that sooner or later he’s going to be gone. Now, Trump is putting together the most pro-Israel team that I can remember in my lifetime. This is great news for America and for our fight against radical Islam, and great news for Israel. This is the beginning of a new era in the Trump Administration.'”

* The Jewish Star reported that at the 2016 event ZOA National President Morton Klein said that use of the term “occupation” to describe Israel’s role in Judea and Samaria was “Orwellian.”

It also reported: “Bolton, who served at the U.N. under President George W. Bush, was a leader, while assistant secretary for International Organization Affairs at the Department of State under the first President Bush, in the successful effort to rescind the United Nations resolution from the 1970s that had equated Zionism with racism.”

A portion of the Israel lobby, J Street, opposes Bolton (as do, many – possibly most – Jewish Americans).