You Are Here: Home → Bill Moyers: “We are hostage to his fortune”: Sheldon Adelson, Benjamin Netanyahu and America’s dark money conspiracy 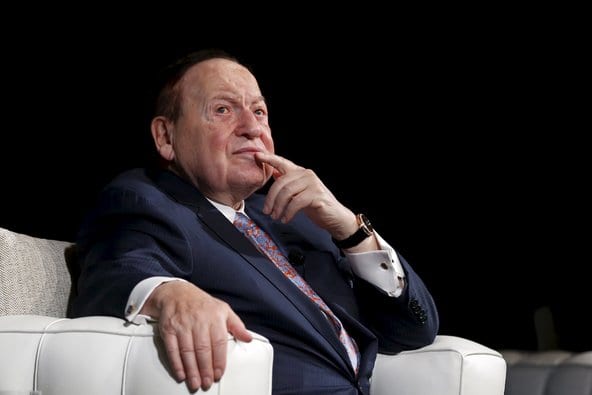 This piece originally appeared on BillMoyers.com on March 4, 2015

Everything you need to know about Israeli Prime Minister Benjamin Netanyahu’s address to Congress Tuesday was the presence in the visitor’s gallery of one man – Sheldon Adelson.The gambling tycoon is the Godfather of the Republican Right. The party’s presidential hopefuls line up to kiss his assets, scraping and bowing for his blessing, which when granted is bestowed with his signed checks. Data from both the nonpartisan Center for Responsive Politics and the Center for Public Integrity show that in the 2012 election cycle, Adelson and his wife Miriam (whose purse achieved metaphoric glory Tuesday when it fell from the gallery and hit a Democratic congressman) contributed $150 million to the GOP and its friends, including $93 million to such plutocracy-friendly super PACs as Karl Rove’s American Crossroads, the Congressional Leadership Fund, the Republican Jewish Coalition Victory Fund, Winning Our Future (the pro-Newt Gingrich super PAC) and Restore Our Future (the pro-Mitt Romney super PAC).

Yet there’s no knowing for sure about all of the “dark money” contributed by the Adelsons – so called because it doesn’t have to be reported. Like those high-rise, multi-million dollar apartments in New York City purchased by oligarchs whose identity is hidden within perfectly legal shell organizations, dark money lets our politicians conveniently erase fingerprints left by their ink-stained (from signing all those checks) billionaire benefactors.

But Sheldon Adelson was not only sitting in the House gallery on Tuesday because of the strings he pulls here in the United States. He is also the Daddy Warbucks of Israel and Benjamin Netanyahu is yet another of his beneficiaries – not to mention an ideological soulmate. Although campaign finance reform laws are much more strict in Israel than here in the United States, Adelson’s wealth has bought him what the historian and journalist Gershom Gorenberg calls “uniquely pernicious” influence.

Adelson owns the daily Israel Hayom, a leading newspaper, as well as Makor Roshon, the daily newspaper of Israel’s Zionist religious right and NRG, a news website. He gives Israel Hayom away for free in order to promote his hardline views – the headline in the paper the day after Obama’s re-election was “The US Voted [for] Socialism.”

More important, he uses the paper to bang the drum incessantly for Netanyahu and his right-wing Likud Party, under the reign of which Israel has edged closer and closer to theocracy. As Hebrew University economist Momi Dahan put it: “De facto, the existence of a newspaper like Israel Hayom egregiously violates the law, because [Adelson] actually is providing a candidate with nearly unlimited resources.”

In fact, as Israel’s March 17 election approaches, Adelson has increased the press run of Israel Hayom’s weekend edition by 70 percent. The paper says it’s to increase circulation and advertising, but rival newspaper Ha’aretz reports, “Political sources are convinced the extra copies are less part of a business plan and more one to help Netanyahu’s re-election bid.” Just like the timing of Netanyahu’s “State of the Union” address to Congress this week was merely a coincidence, right? “I deeply regret that some perceive my being here as political,” Netanyahu told Congress. “That was never my intention.” Of course.

In Gershom Gorenberg’s words, the prime minister “enjoys the advantage of having a major newspaper in his camp that portrays the world as seen from his office: a world in which Israel is surrounded by enemies, including the president of the United States; in which peace negotiations are aimed at destroying Israel; in which Israel’s left is aligned with all the hostile forces, and even rightists who oppose Netanyahu want to carry out a coup through the instrument of elections.”

So Netanyahu gets the best of both of Adelson’s worlds – his powerful propaganda machine in Israel and his campaign cash here in the United States. Combined, they allow Netanyahu to usurp American foreign policy as he manipulates an obliging US Congress enamored of Adelson’s millions, pushing it further to the right on Israel and the Middle East.

There you have it: Not only is this casino mogul the unofficial head of the Republican Party in America (“he with the gold rules”), he is the uncrowned King of Israel — David with a printing press and checkbook instead of a slingshot and a stone. All of this came to the fore in Netanyahu’s speech on Tuesday: the US cannot determine its own policy in the Middle East and the majority in Congress are under the thumb of a foreign power.

Like a King Midas colossus, Sheldon Adelson bestrides the cause of war and peace in the most volatile region of the world. And this is the man who — at Yeshiva University in New York in 2013 — denounced President Obama’s diplomatic efforts with Iran and proposed instead that the United States drop an atomic bomb in the Iranian desert and then declare: “See! The next one is in the middle of Tehran. So, we mean business. You want to be wiped out? Go ahead and take a tough position and continue with your nuclear development.”

Everything you need to know about Benjamin Netanyahu’s address to Congress Tuesday was the presence in the visitor’s gallery of that man. We are hostage to his fortune.