You Are Here: Home → Group that raises money for Israeli soldiers got $2-5 million federal loan 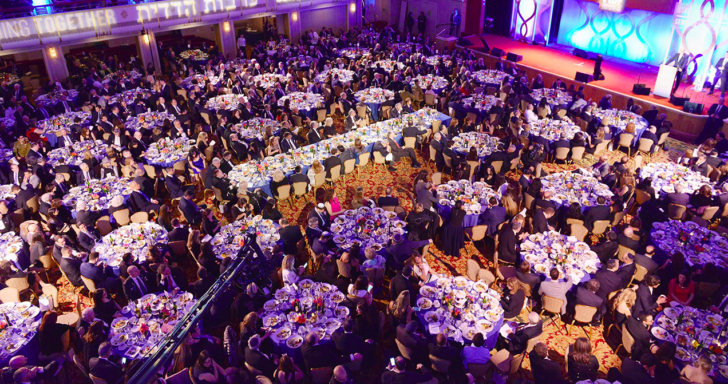 An organization that holds opulent galas to raise money for foreign soldiers, received a forgivable federal loan of somewhere between $2 million to $5 million, while numerous American mom-and-pop businesses applied in vain for the coronavirus relief program.

The group, Friends of the IDF (FIDF), holds glittering extravaganzas around the U.S. that raise tens of millions of dollars for Israeli soldiers.

These are held despite the fact that numerous organizations have documented massive human rights violations by Israeli forces (see video below). The U.S. gives Israel over $10 million per day in military aid.

Last year’s FIDF fundraiser in Manhattan raised $37 million, one of 20 chapters around the country. A 2018 gala in Beverly Hills raised $60 million and a 2017 gala raised over $53 million. Its annual chair, billionaire dual citizen Haim Saban, is a major Clinton donor. (video below)

A featured article by Israeli news site Ynetnews reports that Jewish Americans are the wealthiest group in the U.S.

Many small businesses around the country have been unable to obtain the coronavirus assistance loans.

One U.S. emergency grant program is already out of money, while nearly half of all small businesses worry that they won’t be able to carry on due to the shutdowns.

The loan program accessed by FIDF, Paycheck Protection Program (PPP), has been accused of favoritism, as some billionaires received loans while struggling small businesses went bankrupt.

Donations to FIDF are tax-deductible, which means they remove thousands of dollars (perhaps far more) from the U.S. economy.

Meanwhile, 40 thousand U.S. veterans are homeless on any given night, and veterans hospitals are often underfunded.

Numerous other organizations that support Israel also received large grants, many in the $1million+ range.

JTA states: “Jewish groups had organized quickly to apply for the loans, with the Jewish Federations of North America, a national umbrella fundraising body, providing guidance on the application process.”

Jewish Federations represents 446 groups around the U.S. One of its major objectives is to “strengthen the State of Israel.” Its website boasted in May that even during America’s “worst health crisis in a century,” the San Francisco Federation had already “earmarked $804,000 for grants to Israel.”

Alison Weir is executive director of If Americans Knew, president of the Council for the National Interest, and author of Against Our Better Judgment: The Hidden History of How the U.S. Was Used to Create Israel. (The number of homeless American veterans was updated from a previous version.)

Giving Thanks: Five Staunchly Pro-Israel Entertainers Who Deserve Our Gratitude