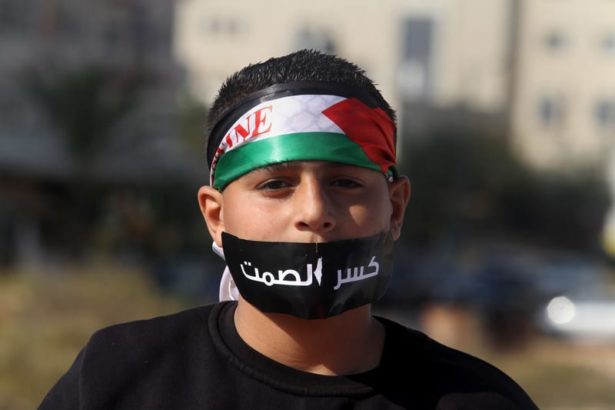 An actor is seen demonstrating the “banana” method, one of several standard torture techniques used by the Shin Bet during interrogations of Palestinian prisoners. (Haaretz}

The Electronic Intifada tells us that for more than 20 years Israeli doctors have worked with Israeli security forces in practices that violate medical ethics. The global medical ethics watchdog World Medical Association looks the other way.

It is now more than 20 years since Amnesty International first concluded that Israeli doctors working with Israel’s security services “form part of a system in which detainees are tortured, ill-treated and humiliated in ways that place prison medical practice in conflict with medical ethics.”

But with the latest attempt foundering last year and despite changes in leadership over the years, the conclusion that now has to be drawn is that, when it comes to Israel, the WMA is not fit for the purpose for which it was created after World War II.

The WMA is mandated to ensure that its member associations abide by its codes, in particular its seminal 1975 anti-torture WMA Declaration of Tokyo. This obliges doctors not just to not participate directly in torture but also to protect the victims and to speak out whenever they encounter it.

The significant precedent for our action against the Israeli association was the expulsion from the WMA of the Medical Association of South Africa during the apartheid era on precisely the grounds that doctors became a part of a system in which torture was routine, just as Amnesty International concluded was the case in Israel.

Since then, Physicians for Human Rights-Israel has often stated that if the IMA refused to allow doctors to serve in security units commonly deploying torture the practice would come to a halt. The medical presence in these units offers moral legitimation to Israel’s interrogators.

The first attempt to hold the IMA accountable came in 2009, when some 725 physicians from 43 countries appealed to the WMA, attaching the published findings from a number of human rights organizations including Amnesty, the Public Committee Against Torture in Israel and the United Against Torture coalition. That effort ended when it became clear that then-president of the WMA, Yoram Blachar, who was also president of the IMA, would not take any action, indeed refused to even acknowledge receipt of the submission.

Rather than investigating the claims made in the appeal, Blachar filed a libel suit in London against the individual who headed the 2009 campaign (and is also the author of this article). We rebutted the suit, which alleged we had duped signatories into signing the petition. Signatories helped us with our successful rebuttal by asserting to the libel lawyers that they were no dupes. Noam Chomsky was among those in public support of our effort.

The latest of these attempts to hold the IMA accountable came last year when 71 UK-based doctors made a fresh appeal to the WMA. This time, the submission also leaned on the 2011 Physicians for Human Rights-Israel report “Doctoring the Evidence, Abandoning the Victim: The Involvement of Medical Professionals in Torture and Ill Treatment in Israel” regarding the work of Israeli doctors in security units where torture of detainees was routine.

Why, the 2016 submission asked, were the doctors posted to these units not protecting detainees and protesting their treatment? And why has the Israeli Medical Association not acted on such reports, as it should according to the standards set down by the World Medical Association?

This time, we hoped that the international reputation of prominent British medical academic Sir Michael Marmot, who at the time was WMA president, could be brought to bear on a case that has been a standing reproach to the idea that global regulation of the ethical behavior of doctors is even-handed and effective.

Marmot did send us an acknowledgment of receipt (unlike his predecessor) but within days of receiving this, we were staggered to see a letter from Marmot to the Simon Wiesenthal Center published on the center’s website.

Addressed to Dr. Shimon Samuels, director for international relations at the Wiesenthal Center, the letter startlingly stated that, vis-à-vis past claims, “investigations have revealed no wrongdoing or mishandling of the cases by the Israeli Medical Association.”

This is entirely untrue. For many years, Physicians for Human Rights-Israel has tried to get the IMA to conduct such an investigation but found the association consistently unwilling. “Persistently repeated attempts,” the rights group concluded in 2011 in Doctoring the Evidence, “calling the IMA’s attention to cases arousing suspicion of doctors’ involvement in torture and cruel or degrading treatment, have not been dealt with substantively.”

The IMA did in 2009 look into testimonies of victims of torture collected in 2007 by the Public Committee Against Torture in Israel, but concluded, after a few phone calls, that the accusations were without merit and flawed because they had no evidence “other than the word of the prisoners.” That conclusion effectively delegitimized victim complaints from the outset.

Not fit for purpose

Marmot’s letter to Samuels in effect gifted the IMA a signal propaganda victory. He did not just make inaccurate statements: he effectively offered the IMA instant and public exoneration. Coming from the WMA president himself, presumed to be speaking for the whole organization, this was a real propaganda coup and one taken up by media outlets like The Jerusalem Post, whose report was duly headlined “World Medical Association affirms trust in Israeli doctors in response to BDS campaign.”

With repeated attempts to have the WMA take the IMA to task for a conclusive body of evidence showing the Israeli medical establishment is – at the very least – enabling a system of torture of prisoners, the focus must now shift to the WMA itself.

Unfortunately, as the case with Israel illustrates, the WMA seems unwilling to act against those with powerful friends like the US. It is far less hesitant in raising concerns with other less powerful countries like Iran or Bahrain, to name but two.

We therefore have to conclude that the world’s medical body is complicit with these Israeli abuses and that its purported mission to uphold ethical standards across the globe is a sham.

This is bad news for Israeli doctors thrust into ethically compromised roles. It is worse news for Palestinian detainees with little to protect them.

Derek Summerfield is a London-based medical academic involved in human rights campaigning on Israel/Palestine for 25 years.