You Are Here: Home → Giraldi: Many More Questions Remain to be Answered about Epstein 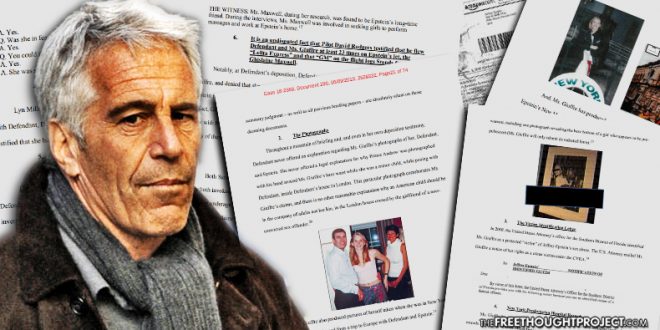 Jeffrey Epstein, who allegedly committed suicide in his jail cell on August 10th, grew up in Brooklyn, New York and made his fortune between Wall Street and a financial management company. His close contacts included Presidents Bill Clinton and Donald Trump.

We may never know how Jeffrey Epstein embezzled millions, nearly walked free after a sex crime conviction – or whether he was a spy for Israel.

by Philip Giraldi, reposted from the American Herald Tribune, Aug. 10, 2019

The Jeffrey Epstein saga goes on even though convicted pedophile Epstein himself has been found hanged in his jail cell in Manhattan. One has to wonder how he managed to kill himself, if that is indeed the case, as he was reportedly on suicide watch at the prison and it is to be presumed that he had been stripped of any clothing or accoutrements that would have been usable to that end. So, he is dead but did he do it himself or was he helped? There are many prominent individuals and powerful government agencies that will be very pleased that he is gone as most of his secrets will have gone to the grave with him.

There was certainly a warning that something might happen. Two weeks ago, he was reportedly found unconscious in his jail cell with marks around his neck. It was suggested that he might have tried to kill himself or, alternatively, had been beaten up by another inmate. There was also considerable speculation that some aggrieved part of the Deep State was trying to kill him to silence him.

The subsequent press reports revealed that Epstein had been taken to a hospital, but there has been no follow-up about his condition or status apart from a brief note that he had been returned to the same jail under suicide watch. In any event, the story had pretty much died, which is precisely what a lot of the high rollers and politicians who became involved with Epstein would have liked to see happen. Nevertheless, investigations of the “Affair Epstein” reportedly were continuing at the federal level as well as in New York State and Florida.

The most recent elaboration of the Epstein saga prior to his death came from his former patron Leslie Wexner, the canny Jewish business tycoon who built an Ohio based fashion empire called L Brands from scratch. L Brands, by the way, includes Victoria’s Secret, which features young women strutting around in their underwear. The 81 year old Wexner claimed in a 564 word letter that the wily Epstein “misappropriated vast sums of money” from him. In the letter Wexner admitted to having lost at least $46 million from his family money, but some media accounts are suggesting that the fraud amounted to much more, possibly as much as $500 million. And the alleged theft also extended to property, to include the series of transactions that left Epstein possessing the Upper East Side mansion where he resided and did his filming of celebrities having sex with young girls, estimated to be worth $56 million, as well as the commercial airliner that became the Lolita Express and a yacht.

Now, either sum of purloined money is not exactly pocket change even for multi-billionaire Wexner, even if rag trade magnate was enamored of the massages he was getting at Epstein’s house. It would take an extremely poor businessman to be unaware of losing that kind of money and that much property unless his name were Donald Trump.

A slap on the wrist

Wexler claimed that he began to sever ties with Epstein in 2007, after Florida authorities charged Jeffrey in early 2006 with multiple counts of molestation and unlawful sexual activity with a minor. In 2008, Epstein pleaded guilty to state charges of solicitation of prostitution from a minor and was required to register as a sex offender, but he received an astonishingly mild jail sentence of eighteen months with a private cell, unlimited visitors including young women, and daily release so he could be picked up by his driver to go to work in his Palm Beach office, a bit of incomprehensible leniency that is currently being subjected to criminal investigation by the state of Florida. After the sentence was handed down the county sheriff observed that “He was astonished that [Epstein] had to go to prison at all.”

Indeed, the entire Florida side of the Epstein story seems to have disappeared down some memory hole. Epstein was convicted for his involvement with prostitution, but the only remaining issue was the consequences that he faced. That is where other players stepped in, including Harvard Law Professor Emeritus Alan Dershowitz, Palm Beach county state attorney Barry Krischer, and the Miami office U.S. Attorney Alexander Acosta.

Told to “back off” from Epstein

My belief that Jeffrey Epstein was an intelligence agent is based principally on Acosta’s comments when being cleared by the Trump transition team. He was asked “Is the Epstein case going to cause a problem [for confirmation hearings]?” … “Acosta testified that he’d had just one meeting on the Epstein case. He’d cut the non-prosecution deal with one of Epstein’s attorneys because he had ‘been told’ to back off, that Epstein was above his pay grade. ‘I was told Epstein belonged to intelligence and to leave it alone.’”

The questions about Epstein remain even though he is gone, but one fears that the authorities will be disinclined to further investigate a dead man. It appears that no one in the various investigative agencies or the mainstream media has been interested in what Acosta meant, even though it would be simple enough to ask him. Who told him to back off? And how did they explain it? And then there is Epstein’s Austrian passport. Was it fake or real, with a real name and photo substitution or alternation of both picture and name? How did he get it? Austrian passports are highly desirable in intelligence circles because the country is neutral and its holders can travel just about everywhere without a visa.

And there’s more. As a former intelligence officer myself, there is little doubt in my mind that what Epstein did and how he did it was an intelligence operation. There is no other viable explanation for his filming of prominent politicians and celebrities having sex with young girls. And as for the question of whom Epstein might have been working for, the most likely answer is Mossad. The CIA would have had no interest in compiling dossiers on prominent Americans, but American movers and shakers like Bill Clinton, with his 26 trips on the Lolita Express, former Governor Bill Richardson, or former Senator George Mitchell are precisely the types of “agents of influence” that the Mossad would seek to coerce or even blackmail into cooperation.

Other compelling evidence for a Mossad connection came from Epstein’s relationship with Ghislaine Maxwell, who reportedly served as his key procurer of young girls. Ghislaine is the daughter of Robert Maxwell, who died or possibly was assassinated in mysterious circumstances in 1991. Maxwell was an Anglo-Jewish businessman, very cosmopolitan in profile, like Epstein, a multi-millionaire who was very controversial with what were regarded as ongoing ties to Mossad. After his death, he was given a state funeral by Israel in which six serving and former heads of Israeli intelligence listened while Prime Minister Yitzhak Shamir eulogized: “He has done more for Israel than can today be said.”

Israel and high-profile Jewish players also have continued to turn up like bad pennies in the Epstein case, but no one seems to be interested in pursuing that angle. Epstein clearly had contact with former Israeli Prime Minister Shimon Peres and Ehud Barak and Wexner also had close ties to the Jewish state and its government. Barry Krischer, who may have been the source of the comments to Acosta, has received the Anti-Defamation League (ADL) award. Evidence also suggests that Krischer, cooperating with rabidly pro-Israel Epstein lawyer Alan Dershowitz, played a key role in the failure to adequately punish Epstein for his conviction for pedophilia.  According to a recent New Yorker story, the police investigators of the Epstein case observed that “the tone and tenor of the discussions of this case with Krischer changed completely” after his meetings with Dershowitz. At that point, the two detectives most involved in the case found themselves under extreme pressure. They were surveilled constantly by private investigators and they even had their household trash snatched and searched. And the resulting plea agreement with Krischer “…was due to the efforts of Dershowitz, who had proceeded to attack and smear the victims.”

Krischer claims that his office “subpoenaed witnesses took evidence to a Grand Jury, which returned a single felony count indictment against Epstein of soliciting prostitution,” but the reality appears to be that he worked with the defense to get Epstein off. There was plenty of evidence based on more than forty interviews with victims to convict Epstein, but instead of having him arrested, Krischer instead set up the Grand Jury with no mention of underage victims to mitigate the possible consequences. He also did not inform the victims of what he had arranged so they could challenge the verdict and penalty, a violation of Crime Victims Rights Act.

The Palm Beach police who worked the case at the time told The Miami Herald as part of an investigation published in November that they felt pressured by Krischer to downgrade Epstein’s case to a misdemeanor, or to drop it entirely. They said “the fix was in.” Acosta, more recently, did not refer to Krischer by name during an early July news conference, but spoke of the Palm Beach County state’s attorney. He described his own office as stepping in to ensure Epstein faced some form of punishment. “Simply put, the Palm Beach State Attorney’s Office was willing to let Epstein walk free. No jail time. Nothing,” Acosta said. “Prosecutors in my former office found this to be completely unacceptable, and we became involved.”

After thirteen months in country club jail in Palm Beach, Epstein was released. At his mansion in New York City, he subsequent had an artist paint a mural of himself in jail, evidently as an insider joke for those who knew about his time behind bars. End of story? Not exactly, even though Epstein is now dead. But the key questions go unanswered including was he a spy for Israel? And what about the Krischer-Dershowitz connection that kept him from being punished commensurate with his crimes? Did those instructions also come from Israel or from its friends in the U.S. Justice Department? Will the three simultaneous investigations currently taking place even continue and ask the right questions now that the target of the investigation is gone? Given the high stakes in the game, quite likely, there will be a cover-up both of how Epstein lived and how he died. We the public will never know what Epstein was all about.

Israel’s Fifth Column: Exercising control from inside the government