You Are Here: Home → Gideon Levy: Thom Yorke, This Is Why You Should Boycott Israel

Gideon Levy: Thom Yorke, This Is Why You Should Boycott Israel 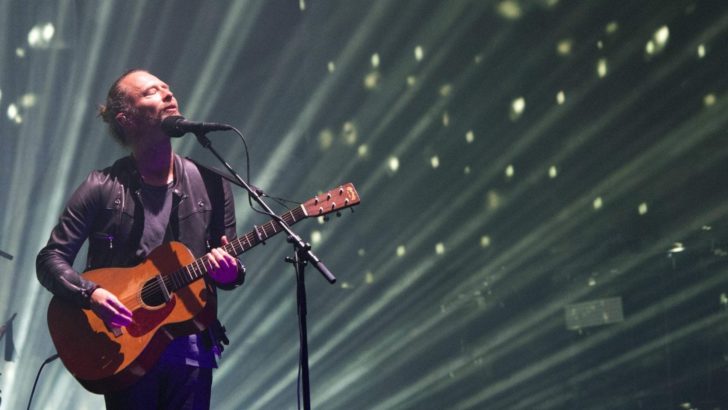 Hasn’t the time come to do away with this artificial distinction between ‘nice’ Israelis and the brutal occupation they are responsible for?

Anyone questioning whether a boycott is a just and effective means of fighting the Israeli occupation should listen to the counterarguments of Thom Yorke from British rock band Radiohead and Yesh Atid Chairman Yair Lapid. The front men of Radiohead and Yesh Atid present: cheap propaganda. Their counterarguments could convince any person of conscience around the world – to support the boycott. Yorke, who ignores the boycott movement, and Lapid, who is an ardent opponent of the Boycott, Sanctions and Divestment movement, have enlisted to oppose the movement. Their reasoning says a lot more about them than the BDS movement.

Boycotting is a legitimate means. Israel as a state makes use of it, and even preaches that other countries should follow suit. Some Israeli citizens also make use of it. There is a boycott of Hamas in Gaza, sanctions on Iran. There are boycotts of nonkosher stores, boycotts against eating meat, and of Turkish beach resorts. And the world also uses it, imposing sanctions on Russia right after its annexation of Crimea.

The only question is whether Israel deserves such a punishment, like the one imposed on apartheid South Africa in an earlier era, and whether such steps are effective. And one more question: What other means have not been tried against the occupation and haven’t failed?

Yorke directs his ire against fellow rock star Roger Waters, perhaps the most exalted of protest artists at the moment, who called on Yorke to reconsider his band’s concert appearance in Tel Aviv on July 19.

In a recent interview with Rolling Stone magazine, Yorke explained his reasons: He would never dream of telling anyone where to work.

Does he think sweatshops or blood diamond mines are legitimate workplaces? Is it OK to call on people not to do business with them? Are settlement products any more ethical? “The kind of dialogue that they want to engage in is one that’s black or white. I have a problem with that,” Yorke told Rolling Stone. What problem? Is it not black and white? Not occupier and occupied? Not oppressor and dispossessed?

“I just can’t understand why going to play a rock show” is a problem to them, Yorke says.

Hello, am I speaking to Radiohead? OK. There’s no problem with the show. The problem is with its audience.

Hasn’t the time come to do away with this artificial distinction between the Israelis who view themselves as nice and just – “Good evening, Tel Aviv! How wonderful to be here!” – and the brutal occupation they are responsible for? Hasn’t the time come to punish them in a nonviolent manner for the crimes that each and every one of them is party to?

And how do you punish an entire people? The only nonviolent way is to boycott them. Maybe it will rouse them from their blindness. Waters asked Yorke not to entertain Israelis because they don’t deserve it as long as the occupation continues a half-hour drive from Radiohead’s Yarkon Park concert venue. There is no more just demand.

And Yair Lapid, being Yair Lapid, is much more demagogic and populist. With an Israeli flag as a backdrop and Israeli flag on his lapel – because one alone just isn’t convincing enough – he was interviewed last week by one of the world’s most brilliant and incisive interviewers, Tim Sebastian, on German broadcaster Deutsche Welle. Lapid criticized Sebastian, saying, “He thinks his role is to represent the Palestinians rather than the truth,” which is proof that Lapid doesn’t understand a thing about good journalism. But his arguments against the boycott were even worse.

Lapid was proud of being among the first to fight the boycott, as if it were some kind of epic mission behind enemy lines. He “knows” that BDS is funded by Hamas – after all, it was reported in the Wall Street Journal. And also that the movement is linked to the grand mufti of Jerusalem, who collaborated with the Nazis.

And anyone who is yet to be convinced then gets hit with the following statement: BDS calls for the release of those who hanged gay people on telephone poles and those who think it’s acceptable to beat their wives and murder Jews and Christians. That’s BDS. The occupation is OK.

And if that’s BDS and the occupation in the eyes of this candidate for prime minister, we’d be better sticking with the current premier, Benjamin Netanyahu.

If that’s the level of Lapid’s argument and knowledge, then it’s clear there is no opposition in Israel to either Netanyahu’s Likud party or the occupation. And if that’s the case, there’s no choice but to support BDS.

Gideon Levy is a Haaretz columnist and a member of the newspaper’s editorial board. He is the author of the weekly Twilight Zone feature, which covers the Israeli occupation in the West Bank and Gaza over the last 25 years, as well as the writer of political editorials for the newspaper. Levy was the recipient of the Euro-Med Journalist Prize for 2008; the Leipzig Freedom Prize in 2001; the Israeli Journalists’ Union Prize in 1997; and The Association of Human Rights in Israel Award for 1996. His new book, The Punishment of Gaza, has just been published by Verso Publishing House in London and New York.