You Are Here: Home → Foundation to ‘Combat Anti-Semitism’ will be coming after high school, college students

Foundation to ‘Combat Anti-Semitism’ will be coming after high school, college students 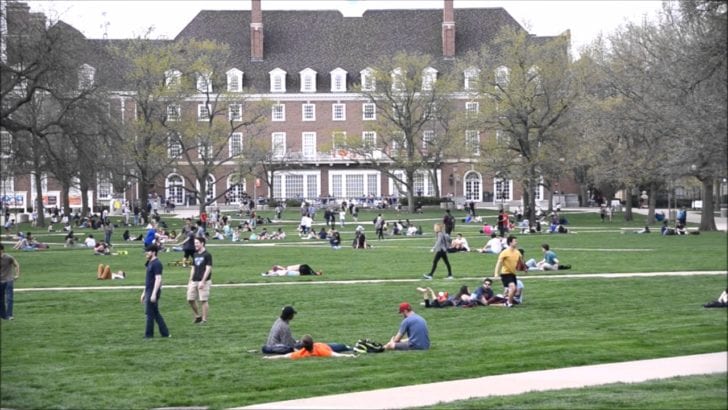 Starting a new level of school is tough. The Foundation to Combat Anti-Semitism is about to make things a lot more complicated.

The Foundation to Combat Anti-Semitism has plans to teach high school and college students how to beat hate and embrace tolerance – except when it comes to Palestinians.

A good education includes learning to socialize appropriately, to treat minority and marginalized classmates, like everyone, with respect and sensitivity. A new organization has its eye on high school and college students – and hopes to train them to stay silent on the issue of Israel – or even become apologists for Israel’s apartheid regime.

The organization is called the Foundation to Combat Anti-Semitism (FCAS), and from the name, one would think its objective is obvious – combating anti-Semitism. In reality, the group is focused to a great extent on something completely different: anti-Zionism.

Young men and women in high school or college who want to be culturally competent might not be aware of the difference.

While true anti-Semitism – hatred of Jews because they are Jews – is a real problem that needs real attention, like all types of bigotry, the Foundation is really interested in protecting the State of Israel from valid and necessary criticism, often called “anti-Zionism.”

It’s worth noting that the moniker “anti-Zionism” is itself somewhat deceptive, as it suggests a strictly oppositional attitude. However, in most cases, individuals who oppose Zionism (the creation of a Jewish state in historic Palestine) are actually advocating for justice for the displaced and oppressed Palestinians.

This advocacy includes support for the Boycott, Divest, and Sanction (BDS) Movement, an effort modeled after the campaign to replace apartheid with equality in South Africa.

FCAS, which has been at work for about a year, just went public with its slick new website, Together Beat Hate, or [TBH]:

Call it prejudice. Call it bias. Call it hate. Whatever you call it, we can only overcome it together.

Nowhere on the site is the word “Israel” mentioned. But it’s not hard to discover the subtext.

FCAS is part of the philanthropy arm of the Kraft Group, the brain child of billionaire and New England Patriots owner Robert Kraft. The Kraft Group’s website describes the Foundation:

The Foundation to Combat Anti-Semitism catalyzes dynamic new solutions to stop the age-old hatred advanced by those who seek the elimination of Judaism and the Jewish people and the modern movement to destroy the world’s only Jewish State.

No less than the Israeli Prime Minister himself, Benjamin Netanyahu, recognized the intent of the organization, describing Kraft’s plan as a stand against “efforts by our enemies to undermine the State of Israel.”

Because the Foundation has adopted the International Holocaust Remembrance Alliance (IHRA) working definition of anti-Semitism, it considers much criticism of Israel to be inherently anti-Semitic.

Targeting the next generation

FCAS’s work started with a study to discover which Americans were least conversant on the subject of anti-Semitism. They found that 13- to 17-year-olds fit the bill. They narrowed the field further to focus on those teens who have “an incomplete or misconstrued understanding of antisemitism” (as opposed to those who already hold anti-Semitic attitudes, or are already opposed to anti-Semitism).

The organization’s plan, then, is to “engage [these] youth in education, conversation, and activism around the meaning and reality of anti-Semitism,” presumably as defined by IHRA.

Robert Kraft explains that he specifically wants to “counter the normalization of anti-Semitic narratives that question Israel’s right to exist, disguised as part of legitimate debate on campuses and in the media.”

“On campuses” refers to school organizations like Students for Justice in Palestine (SJP) – an international movement to inform fellow students and others about the human rights violations that Israel commits every day. Its focus is nonviolent action to pressure Israel to stop violating international law in its treatment of Palestinians; its signature event is Israeli Apartheid Week.

Pro-Israel organizations like the Anti-Defamation League are also critical of SJP’s awareness-raising work, claiming that its criticism of Israel is “hate speech” that “makes Jewish students feel unsafe.”

The Israel-centric paradigm of Together Beat Hate ([TBH]) is necessarily intolerant of justice for Palestinians. American teenagers may learn that for example, when they see guest speaker or a tweet calling on Israel to end its illegal blockade on Gaza, that’s anti-Semitic.

Pro-Israel groups all over the US have urged Congress and their state legislatures to pass bills limiting freedom of Israel-critical speech on campus. Congress has entertained many such bills as well (some have passed, although they are unconstitutional) – despite the fact that 75% of Americans are opposed to such legislation. Palestine Legal reports that thirty states have passed their own anti-boycott laws; several have been overturned.

Going after the media

Again, because the Foundation operates under the IHRA definition of anti-Semitism, many online groups that criticize Israel will be viewed as anti-Semitic. This suggests that, as its team combs through the worldwide web, it will likely flag much of the work of legitimate Palestinian justice organizations – probably including If Americans Knew. (It would not be IAK’s first attack.)

Rachel Fish, executive director of the Foundation to Combat Anti-Semitism, and the Kraft Group’s website, spelled out the organizations’s strategy:

Having it both ways

Robert Kraft’s foundation seeks, by targeting the next generation, to help bring an end to anti-Semitism – and an end to advocacy for Palestinian justice. FCAS has one more goal, which Kraft articulated when he first publicly introduced the Foundation:

In combating the scourge of antisemitism, my solemn ambition is to counter all forms of intolerance in the spirit of the ancient Jewish value of tikkun olam — to heal and repair the world.

Healing and repairing the world, by stamping out the cause for Palestinian equality? You can’t have it both ways, Mr. Kraft.