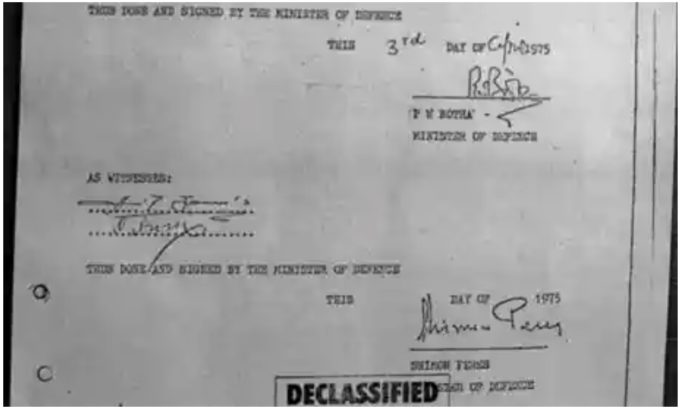 British newspaper the Guardian on Monday published secret South African documents reveled in a new book, according to which Israel allegedly offered to sell the apartheid regime nuclear warheads. The documents, if proven to be true, are the first official documents that prove Israel possess nuclear weapons.

The papers allegedly document a meeting between senior officials of the two countries in 1975, in which South African Defense Minister PW Botha requests the nuclear warheads and then Defense Minister Shimon Peres replies by offering them “in three sizes.”

According to the documentation, the two signed a wide-scale agreement vis-à-vis the military ties of both countries, which includes a clause stating that “the existence of the document” will be kept a secret.

The documents, exposed by American academic Sasha Polakow-Suransky in a book about the close relations between the two countries, provide alleged proof that Israel has nuclear weapons, despite the policy of vagueness it tries to maintain by neither confirming nor denying the existence of such weapons.

The author claims that Israel tried to prevent the post-apartheid South African government from declassifying the documents to his request, and that the documents reveal that the apartheid regime wanted missiles for deterrence purposes and possible attacks against neighboring countries.

If the documents prove to be authentic, they might harm Israel’s attempt to convince the world that even though it possesses nuclear weapons – it uses them responsibly, unlike Iran that cannot be trusted.

According to the Guardian report, the documents indicate that the two sides met on March 31, 1975. Polakow-Suransky wrote in his book, which was published in the United States this week, “Israel’s secret alliance with apartheid South Africa. At the talks Israeli officials formally offered to sell South Africa some of the nuclear-capable Jericho missiles in its arsenal.”

Among those who participated in the meeting was the South African military Chief of Staff, Lieutenant General RF Armstrong, who prepared a memorandum that lists the benefits of acquiring Jericho missiles, but only if they were fitted with nuclear weapons.

The memo, which was classified as “top secret” and dated the same day as the meeting with the Israeli officials, was exposed in the past, but its context was unclear, as it was unknown that it served as a basis for the Israeli offer made on the same day.

In the memo, Armstrong wrote:” In considering the merits of a weapon system such as the one being offered, certain assumptions have been made: That the missiles will be armed with nuclear warheads manufactured in RSA (Republic of South Africa) or acquired elsewhere.”

The documents reveal that “Minister Botha expressed interest in a limited number of units of Chalet subject to the correct payload being available.”

As a response, “Minister Peres said the correct payload was available in three sizes. Minister Botha expressed his appreciation and said that he would ask for advice.” The “three sizes,” according to the British newspaper, are probably in reference to the three types of weapons: Conventional, Chemical and Nuclear.

According to the author, Botha never completed the deal due to its cost, among other factors. South Africa ended up developing its own nuclear bomb, although some claim it received aid from Israel.

Polakow-Suransky claimed that the Israeli Defense Ministry tried to prevent him from accessing the military agreement, stating that it was a sensitive matter – especially its signature and date. The author further claimed that the South African government was not as concerned about the old apartheid regime’s dirty laundry, and handed the documents over after blackening out a few lines.

A spokesman for the President’s Residence strongly denied the report and a said, “We regret that the newspaper did not find it right to ask for an official response and examine the facts with official Israeli sources.”

Other official Israeli sources added that “there is not doubt these papers that allegedly document a nuclear missiles sales deal are completely fabricated.”

FURTHER READING ON A NUCLEAR ISRAEL: