You Are Here: Home → Deaf Palestinian man shot by Israeli soldiers dies of his wounds 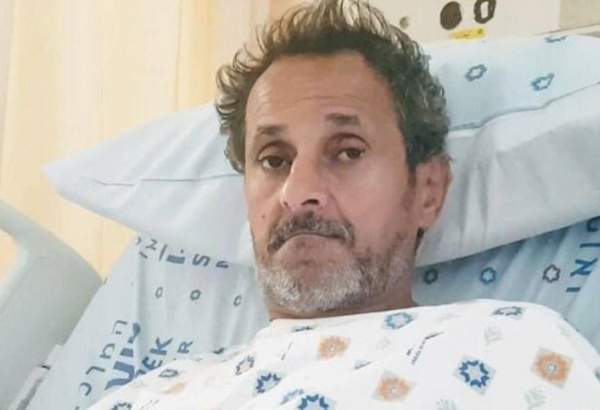 In August, Nasser Halwa started walking through the wrong line at an Israeli checkpoint. Israeli soldiers shouted at him to stop, but Halawa is deaf, so he didn’t hear them. They then shot him. A few months later he died of his wounds…

Palestinian medical sources have reported, Friday, that a deaf and mute man, who was shot by Israeli soldiers on August 17th, 2020, has died from complications related to his wounds.

The sources said the Palestinian, Nasser Halawa, 47, from Nablus in northern West Bank, was shot by Israeli soldiers at the Qalandia Terminal, north of occupied Jerusalem, and suffered life-threatening wounds.

Halwa was first moved to a hospital in occupied Jerusalem, and was discharged two weeks ago, before he started receiving treatment in Palestinian hospitals, but eventually succumbed to his wounds and complications.

Muawiya Mona, the secretary of the “Palestinian General Union for People with Disability” in Nablus, said the shooting and the resulting death of Halawa is yet another Israeli crime against the Palestinian people, including people with special needs.

He added that the slain man was walking near the Qalandia Terminal when the soldiers started shouting at him, however, he could not hear them, before they opened fire at him for “refusing to heed to their demands to stop.”

Eyewitnesses said they saw the soldiers opening fire at the man as he walked down the lane, dedicated for cars not pedestrians, before closing the terminal in both directions.

The Israeli army claimed the man approached the soldiers “suspiciously,” and failed to heed to their demands to stop.

It also said the soldiers fired live rounds at the man, shooting him in the leg, inflicting what the military described as “light-to-moderate wounds.”

On May 30th, 2020, an autistic Palestinian man, identified as Eyad al-Hallaq, 32, was shot and killed by Israeli officers, who fired many live rounds at him at the stairs of the Al-Aqsa Mosque, in occupied Jerusalem, and left him lying on the ground with multiple gunshot wounds for over an hour until he bled to death.

The slain Palestinian was walking to the al-Bakriyyah School for persons with special needs when the soldiers shot him.

A Mentally Disabled Palestinian Was Shot at an Israeli Checkpoint. His Family Wasn’t Notified for Days

When Anwar saw news footage of his brother lying wounded at a checkpoint, days after the incident, he was relieved. At least he was alive

A faint smile crosses his lips at the sight of the strangers who have come to visit him. In short order the smile morphs into loud laughter, almost wild – seemingly a mixture of relief and joy. Fifty-five-year-old Abdel Nasser Halawa is deaf from birth, and he also suffers from intellectual disabilities. For a week he was hospitalized in room No. 7142 in the orthopedic ward of Shaare Zedek Medical Center in Jerusalem, after being shot at the Qalandiyah checkpoint, without anyone from his family being allowed to visit him. Worse, for nearly three days his family had no idea what happened to him at that busy crossing between Jerusalem and the northern West Bank. They feared for his fate.

The mystery was solved only when Abdel’s brother Anwar saw a clip online showing what happened at the Qalandiyah checkpoint last Monday. Anwar identified his brother, seen laying wounded on the road, by the clothes he was wearing. That was at 12:30 A.M. last Thursday In the morning he launched efforts to find his older brother, the apple of his eye. Four exhausting, despairing days went by until he received a permit to visit him. On Monday evening this week, the two brothers were movingly reunited at the hospital.

“Must keep off his right foot,” says a note from the staff, attached to Halawa’s bed. His right shin, where he was shot, is encased by an iron brace held together with screws. Occasionally he grimaces from pain. A soft drink and a cake, origins unknown, are on the bedside table.

Monday morning, when we first visited, marked a week since his hospitalization, and he was still cut off completely from his family. They had no way to speak to him by phone, and an entry permit hadn’t yet been issued to his distraught brother. Even in person, communication with him is limited to simple hand gestures.

Dr. Mahmud Mahamid, a gastroenterologist and liver specialist at Shaare Zedek, who comes from the Israeli Arab village of Zalfa in the north, volunteered to help us communicate with Halawa, but with meager results: He gestured that he was feeling well, and that he has three children. No more could be extracted from him, apart from excited waving of his hands.

So he lay like that for a week, in the second of his room’s three hospital beds, alone with his pain, after being shot at the Qalandiyah checkpoint when he approached on foot in a lane reserved for vehicles only, and couldn’t hear the calls of the contract security guards to stop. They shoot deaf people, don’t they – and mentally impaired middle-aged men.

The police told Haaretz immediately after the incident: “The guards called to him several times to stop, and when that didn’t happen they observed proper procedures and arrested the suspect, within the framework of which he was shot at and wounded in his lower body.”

When we left the room for a few moments, he waved goodbye to us. When we returned, the laughter was gone, replaced by an expression of deep sadness.

Initially, we didn’t know the first thing about the solitary man in the orthopedic department, apart from his name. In the hours that followed we tried to track down his brother, who lives in the city of Nablus in the West Bank, through the human rights organization Yesh Din, which was helping Anwar Halawa in his efforts to obtain an entry permit to Israel to visit his hospitalized brother. At the time, Anwar had been waiting in vain for hours next to the office of the Israel Coordination and Liaison Unit at the Eyal checkpoint in Qalqilyah.

It was his second day there, after having been unsuccessful in obtaining a permit the day before; the offices were closed Friday and Saturday. Anwar related that the checkpoint personnel had claimed that he was not Abdel Nasser’s brother. Only on Monday afternoon did he receive the sought-after permit, which allowed him to stay in the hospital for eight days.

Anwar Halawa is the proprietor of a car painting business in the village of Mas’ha, where many Israelis used to go for car repairs. He lives in an apartment building in Nablus, where some of his brothers also live with their families. Among them is Abdel Nasser, who is named after the Egyptian president. Another brother was named Castro. Of the family’s 10 children, four were born with hearing impairments and two, including Castro, have died. Abdel Nasser is 10 years older than Anwar, and as far as the latter knows his brother only briefly attended school, which was unable to accommodate his special needs.

The Halawas’ parents both died during the past few years; their father, they say, was the oldest barber in the region, working until his death at the age of 91.

Until two years ago, Abdel Nasser was married. That’s when his wife left him. The couple have three teenage children, two of whom live with him, the third with their mother. Abdel Nasser had worked in a carpentry shop but has been unemployed since the coronavirus crisis struck; his brother brought him to his car-painting shop in Mas’ha every day, where he would pass the time.

On Monday of last week, however, Abdel Nasser didn’t accompany his brother to Mas’ha. He left home in the morning and disappeared. It wasn’t the first time, and he had always found his way back. But this time he didn’t.

About a week before Abdel Nasser was shot, Anwar had taken him to the Dead Sea – an event that may hold the key as to where he was heading and why he was at the Qalandiyah checkpoint on that fateful day. Anwar relates that his brother really enjoyed the outing and had perhaps been trying to make his way alone back to the Dead Sea.

When he didn’t return home that evening, Anwar understandably became worried. The next day, he contacted the International Red Cross and some local human rights organizations. Until Wednesday night, he says now, he had no idea what happened to his brother. He was very relieved when he came across the clip of his brother lying wounded at the checkpoint. At least he was alive.

The police didn’t bother to inform the family of what had happened.

Shaare Zedek spokesman Yossi Gottesman stated this week, in response to a query from Haaretz: “Immediately after Abdel Nasser was admitted, contact was made with the family through his brother, Anwar. A social worker and physician, both of whom speak Arabic, spoke several times with Anwar and updated him about [Abdel Nasser’s] condition. In addition, a request was submitted to the liaison unit to obtain an entry permit for the brother.”

Anwar, however, has a different account. He says contact with the hospital was not made until Thursday, three days after the shooting, when he himself called the institution, having learned that his brother was there. Gottesman later acknowledged that “locating the family was very difficult, as the patient is uncommunicative, and the social services personnel made many efforts to make contact.”

Whatever the circumstances, Abdel Nasser seems to be receiving very devoted medical care. He underwent surgery for a shattered bone, and is scheduled to have another operation next week, ahead of rehabilitation.

In any event, Anwar says that after he discovered where his brother was, he set about working on the entry permit for Israel, which was issued on Monday afternoon. Earlier that same day, he had been told he could go home. The staff of Yesh Din, however, advised him to stay put.

Anwar took the document and returned to his home in Nablus, bought some peaches and a new shirt, pants and underwear for his brother, and drove to the Qalandiyah checkpoint, where we met him in the late afternoon and took him to finally be reunited with his wounded brother in the hospital.

The room was dimply lit when we entered. The two brothers embraced, Anwar kissing Abdel Nasser on the cheek. A broad smile spread across the latter’s face. Anwar tried to find out by hand gestures why his brother had gone to Qalandiyah, but Abdel Nasser responded only by making motions of shooting.

Timeline of Palestinian and Israeli deaths