You Are Here: Home → The Crazy Imbalance of Russia-gate: What about Israel?

The Crazy Imbalance of Russia-gate: What about Israel?

If the U.S. government and mainstream media are really concerned about foreign influence in American politics, they might look at Israel and other nations with much more clout than Russia.

The core absurdity of the Russia-gate frenzy is its complete lack of proportionality. Indeed, the hysteria is reminiscent of Sen. Joe McCarthy warning that “one communist in the faculty of one university is one communist too many” or Donald Trump’s highlighting a few “bad hombres” raping white American women.

It’s not that there were no Americans who espoused communist views at universities and elsewhere or that there are no “bad hombre” rapists; it’s that these rare exceptions were used to generate a dangerous overreaction in service of a propagandistic agenda. Historically, we have seen this technique used often when demagogues seize on an isolated event and exploit it emotionally to mislead populations to war.

Today, we have The New York Times and The Washington Post repeatedly publishing front-page articles about allegations that some Russians with “links” to the Kremlin bought $100,000 in Facebook ads to promote some issues deemed hurtful to Hillary Clinton’s campaign although some of the ads ran after the election.

Initially, Facebook could find no evidence of even that small effort but was pressured in May by Sen. Mark Warner, D-Virginia. The Washington Post reported that Warner, who is spearheading the Russia-gate investigation in the Senate Intelligence Committee, flew to Silicon Valley and urged Facebook executives to take another look at possible ad buys.

Facebook responded to this congressional pressure by scouring its billions of monthly users and announced that it had located 470 suspect accounts associated with ads totaling $100,000 – out of Facebook’s $27 billion in annual revenue.

Here is how the Times described those findings: “Facebook officials disclosed that they had shut down several hundred accounts that they believe were created by a Russian company linked to the Kremlin and used to buy $100,000 in ads pushing divisive issues during and after the American election campaign.” (It sometimes appears that every Russian — all 144 million of them — is somehow “linked” to the Kremlin.)

Last week, congressional investigators urged Facebook to expand its review into “troll farms” supposedly based in Belarus, Macedonia and Estonia – although Estonia is by no means a Russian ally; it joined NATO in 2004.

“Warner and his Democratic counterpart on the House Intelligence Committee, Rep. Adam B. Schiff of California, have been increasingly vocal in recent days about their frustrations with Facebook,” the Post reported.

So, on Thursday, Facebook succumbed to demands that it turn over to Congress copies of the ads, a move that has only justified more alarmist front-page stories about Russia! Russia! Russia!

In response to this political pressure – at a time when Facebook is fending off possible anti-trust legislation – its chief executive Mark Zuckerberg added that he is expanding the investigation to include “additional Russian groups and other former Soviet states.”

So, it appears that not only are all Russians “linked” to the Kremlin, but all former Soviet states as well.

But why stop there? If the concern is that American political campaigns are being influenced by foreign governments whose interests may diverge from what’s best for America, why not look at countries that have caused the United States far more harm recently than Russia?

After all, Saudi Arabia and its Sunni Wahabbi leaders have been pulling the U.S. government into their sectarian wars with the Shiites, including conflicts in Yemen and Syria that have contributed to anti-Americanism in the region, to the growth of Al Qaeda, and to a disruptive flow of refugees into Europe.

And, let’s not forget the 8,000-pound gorilla in the room: Israel. Does anyone think that whatever Russia may or may not have done in trying to influence U.S. politics compares even in the slightest to what Israel does all the time?

The Neocons – Israel’s agents – pushed US into war

Which government used its pressure and that of its American agents (i.e., the neocons) to push the United States into the disastrous war in Iraq? It wasn’t Russia, which was among the countries urging the U.S. not to invade; it was Israel and Prime Minister Benjamin Netanyahu.

Indeed, the plans for “regime change” in Iraq and Syria can be traced back to the work of key American neoconservatives employed by Netanyahu’s political campaign in 1996. At that time, Richard Perle, Douglas Feith and other leading neocons unveiled a seminal document entitled “A Clean Break: A New Strategy for Securing the Realm,” which proposed casting aside negotiations with Arabs in favor of simply replacing the region’s anti-Israeli governments.

However, to make that happen required drawing in the powerful U.S. military, so after the 9/11 attacks, the neocons inside President George W. Bush’s administration set in motion a deception campaign to justify invading Iraq, a war which was to be followed by more “regime changes” in Syria and Iran.

Although the military disaster in Iraq threw a wrench into those plans, the Israeli/neocon agenda never changed. Along with Israel’s new regional ally, Saudi Arabia, a proxy war was fashioned to remove Syrian President Bashar al-Assad.

As Israel’s Ambassador to the U.S. Michael Oren explained, the goal was to shatter the Shiite “strategic arc” running from Iran through Syria to Lebanon and Israel’s Hezbollah enemies.

How smashing this Shiite “arc” was in the interests of the American people – or even within their consciousness – is never explained. But it was what Israel wanted and thus it was what the U.S. government enlisted to do, even to the point of letting sophisticated U.S. weaponry fall into the hands of Syria’s Al Qaeda affiliate.

Israel’s influence over US elections 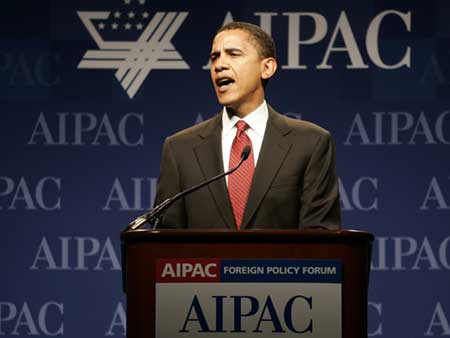 Israel’s influence over U.S. politicians is so blatant that presidential contenders queue up every year to grovel before the Israel Lobby’s conference of the American Israel Public Affairs Committee. In 2016, Donald Trump showed up and announced that he was not there to “pander” and then pandered his pants off.

And, whenever Prime Minister Netanyahu wants to show off his power, he is invited to address a joint session of the U.S. Congress at which Republicans and Democrats compete to see how many times and how quickly they can leap to their feet in standing ovations. (Netanyahu holds the record for the number of times a foreign leader has addressed joint sessions with three such appearances, tied with Winston Churchill.)

Yet, Israeli influence is so engrained in the U.S. political process that even the mention of the existence of an “Israel Lobby” brings accusations of anti-Semitism. “Israel Lobby” is a forbidden phrase in Washington.

However, pretty much whenever Israel targets a U.S. politician for defeat, that politician goes down, a muscle that Israel flexed in the early 1980s in taking out Rep. Paul Findley and Sen. Charles Percy, two moderate Republicans whose crime was to suggest talks with the Palestine Liberation Organization.

So, if the concern is the purity of the American democratic process and the need to protect it from outside manipulation, let’s have at it. Why not a full-scale review of who is doing what and how? Does anyone think that Israel’s influence over U.S. politics is limited to a few hundred Facebook accounts and $100,000 in ads?

And, if you want a historical review, throw in the British and German propaganda around the two world wars; include how the South Vietnamese government collaborated with Richard Nixon in 1968 to sabotage President Lyndon Johnson’s Paris peace talks; take a serious look at the collusion between Ronald Reagan’s campaign and Iran thwarting President Jimmy Carter’s efforts to free 52 American hostages in Tehran in 1980; open the books on Turkey’s covert investments in U.S. politicians and policymakers; and examine how authoritarian regimes of all stripes have funded important Washington think tanks and law firms.

If such an effort were ever proposed, you would get a sense of how sensitive this topic is in Official Washington, where foreign money and its influence are rampant. There would be accusations of anti-Semitism in connection with Israel and charges of conspiracy theory even in well-documented cases of collaboration between U.S. politicians and foreign interests.

Powers-that-be concentrate on the infinitesimal case of Russian “meddling”

So, instead of a balanced and comprehensive assessment of this problem, the powers-that-be concentrate on the infinitesimal case of Russian “meddling” as the excuse for Hillary Clinton’s shocking defeat. But the key reasons for Clinton’s dismal campaign had virtually nothing to do with Russia, even if you believe all the evidence-lite accusations about Russian “meddling.”

The Russians did not tell Clinton to vote for the disastrous Iraq War and play endless footsy with the neocons; the Russians didn’t advise her to set up a private server to handle her State Department emails and potentially expose classified information; the Russians didn’t lure Clinton and the U.S. into the Libyan fiasco nor suggest her ghastly joke in response to Muammar Gaddafi’s lynching (“We came, we saw, he died”); the Russians had nothing to do with her greedy decision to accept millions of dollars in Wall Street speaking fees and then try to keep the speech contents secret from the voters; the Russians didn’t encourage her husband to become a serial philanderer and make a mockery of their marriage; nor did the Russians suggest to Anthony Weiner, the husband of top Clinton aide Huma Abedin, that he send lewd photos to a teen-ager on a laptop also used by his wife, a development that led FBI Director James Comey to reopen the Clinton-email investigation just 11 days before the election; the Russians weren’t responsible for Clinton’s decision not to campaign in Wisconsin and Michigan; the Russians didn’t stop her from offering a coherent message about how she would help the struggling white working class; and on and on.

But the Russia-gate investigation is not about fairness and balance; it’s a reckless scapegoating of a nuclear-armed country to explain away – and possibly do away with – Donald Trump’s presidency. Rather than putting everything in context and applying a sense of proportion, Russia-gate is relying on wild exaggerations of factually dubious or relatively isolated incidents as an opportunistic means to a political end.

As reckless as President Trump has been, the supposedly wise men and wise women of Washington are at least his match.

Investigative reporter Robert Parry broke many of the Iran-Contra stories for The Associated Press and Newsweek in the 1980s. You can buy his latest book, America’s Stolen Narrative,either in print here or as an e-book (from Amazon and barnesandnoble.com).

One Simple Chart Proves That Facebook Thinks You’re A Moron