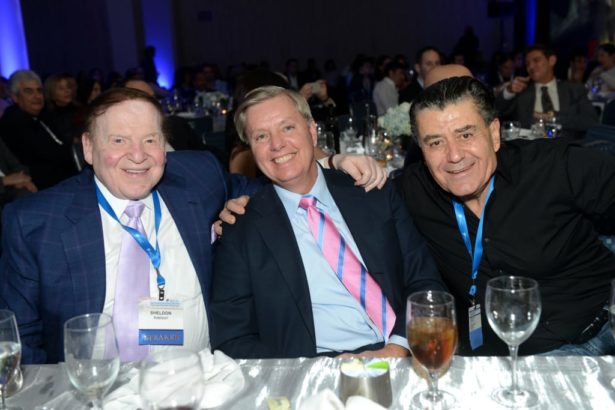 A series of battles within the White House and State Department seem to have been won by the pro-Israel faction, as reported in the two articles below…

The Trump administration will not stand in the way of defense assistance funding to Israel added by Congress and won’t hold Israel to its pledge to return such funds.

“The administration is committed to ensuring Israel receives the assistance that has been appropriated by Congress,” R.C. Hammond, a State Department spokesman, told Fox News on Monday. Hammond relayed the statement to other media after it was posted on Twitter by a Fox News reporter.

At issue is $75 million appropriated by Congress on top of the $3.1 billion due Israel under the current arrangement with the United States, which dates to 2007. Sen. Lindsey Graham, R-S.C., led appropriation of the extra funding in part because he was furious at the terms of a memorandum of understanding negotiated by the Obama administration that governs the next decade of U.S assistance to Israel.

Under those terms, defense assistance was bumped up to an average of $3.8 billion, but Israel agreed not to lobby Congress for additional funds and agreed to return any additional funds.

Hammond was responding to reports in conservative media that the State Department was considering demanding that Israel return the money.
At the time of the signing — before the election and Donald Trump’s surprise victory — Israeli officials said they would return any additional funds appropriated by Congress.

Secretary of State Rex Tillerson has been pushing the Trump White House to demand that Israel give back to the United States millions of dollars in military aid, prompting pushback in the West Wing and further fueling ongoing tensions between Foggy Bottom and the White House over a range of key diplomatic issues, according to multiple sources briefed on the situation.

The Washington Free Beacon first reported on Friday that the State Department has been lobbying the White House to call for Israel to hand back some $75 million in U.S. military aid that was awarded to the Jewish state above the Obama administration’s financial request in 2016.

The former administration came under fire from congressional leaders and the pro-Israel community for conditioning U.S. military aid—a cornerstone of the U.S.-Israel alliance—on a provision that bars Israel from lobbying Congress for increased aid as a range of conflicts in the Middle East develop.

While Congress initially rebelled against this provision, and held up the Obama-era aid package in revolt, Tillerson is said to be lobbying for Israel to give back the additional aid to keep the country in line with the Obama administration’s 2016 agreement, known as the Memorandum of Understanding, or MOU.

Multiple sources who spoke to the Free Beacon said Tillerson’s chief of staff, Margaret Peterlin, personally called White House National Security Council official Dina Powell to relay Tillerson’s position, which is said to have conflicted with the advice of career State Department officials who work on the Israel portfolio.

Powell is said to have balked at the request and told Peterlin that any such move would have to be cleared with President Donald Trump, these sources told the Free Beacon.

Tillerson has been hoping to lobby in favor of calling on Israel to return the aid money during a meeting at the White House, according to these sources.

Knowledge of this discussion, initially disclosed by the Free Beacon, roiled pro-Israel congressional leaders and sparked Sen. Tom Cotton (R., Ark.) to contact the White House to register his opposition.

Cotton “strongly warned the State Department” last week “that such action would be unwise and would invite unwanted conflict with Israel,” according to one senior congressional aide familiar with the situation.

It is unclear exactly where the issue stands presently, as the White House NSC and State Department declined to comment on the situation when approached by the Free Beacon.

The matter has fueled tensions between the White House and State Department, which have found themselves at odds on a range of key issues, including the U.S.-Israel alliance, the Iran portfolio, and other matters. Sources who spoke to the Free Beacon about the standoff have described Foggy Bottom as being in “open war” with the West Wing.

One veteran official with a major pro-Israel organization who has been working on the issue told the Free Beacon that Tillerson appears to adopting opposite policies of those endorsed by Trump.

“There are always debates inside the State Department over things like Israel, Iran, and the Gulf,” the source said, speaking only on background about the sensitive matter. “There are always multiple overlapping camps of career staffers, professional lawyers, and political appointees. But no matter what the topic, you can count on Tillerson, his chief of staff, and his senior Obama holdovers to take the opposite side of whatever the president wants.”

“It doesn’t matter if it’s Iran certification, or the Qatar crisis, or Israel—they always choose the competing recommendation that’s against the president,” the source said.

It appears that on the Israel aid issue, Tillerson deferred to the opinions of State Department lawyers, who say Israel should hand back the $75 million in order to keep it in line with the Obama-era MOU.

This position was chosen over the advice of longtime State Department officials working on the Israel portfolio, according to multiple sources who pointed to the Free Beacon‘s initial Friday report about the situation as sparking an internal war between these factions.

“In this case they used career lawyers to shut down State’s Middle East team, which knew the money was a nothing burger,” said the pro-Israel official. “But when they called up the White House to make the recommendation, Dina [Powell] immediately said it would have to go to the president.”

Powell and others are said to have viewed the situation “as an attempt by Tillerson to sneak through policies that are not what President Trump believes,” according to the source, who echoed information provided by administration insiders and others. “And that’s before we even get to the communications team at the top of the State Department, which is a clusterfuck of such monumental size and shape it can be seen from space.”

As the story was developing late Friday, the State Department declined to explain to lawmakers and reporters the context of the internal divisions between the advice of career officials and lawyers.

A State Department official, speaking only on background, told the Free Beacon that “Israel is a valued ally” and that the administration “is committed to ensuring that Israel receives the assistance that has been appropriated by Congress.”

However, the official could not comment on internal deliberations and conversations that may have taken place surrounding the issue.

Hammond denied any such conversations took place, disputing the multiple sources who independently described them to the Free Beacon.

An NSC spokesman also declined to comment on the matter, telling the Free Beacon, “We are not going to comment on internal United States government discussions.”