You Are Here: Home → Congress votes to elevate ‘Anti-Semitism’ Envoy to Ambassadorship 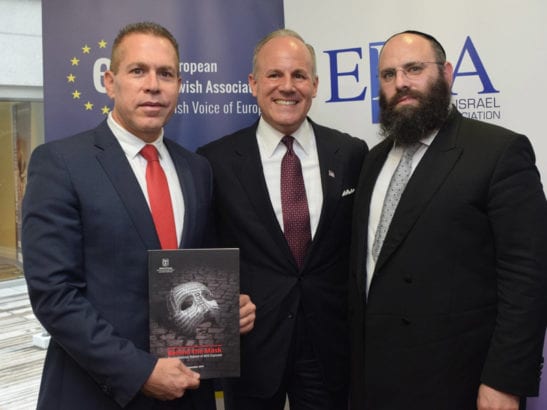 A State Department position that officials said was unnecessary is being elevated to even higher rank, increasing its influence and funding… Claiming to “monitor and combat anti-Semitism,” the position actually often works to combat support for Palestinian human rights…

The US Senate and House have voted legislation to upgrade a position that the State Department had deemed was unnecessary. Once the legislation is signed into law (as is expected), the position will be elevated to ambassadorial rank.

Much of the alleged “anti-Semitism” that the anti-Semitism envoy monitors is, in reality, actions supporting Palestinian human rights. Rather than use the normal, dictionary definition of anti-Semitism, the office employs an aberrant version based on a formulation originally devised by an Israeli official. Under this newly created definition, protests against Israel’s human rights violations and apartheid-like system are often labeled “anti-Semitic.” Many people around the world object to this new definition and how it is being used.

The Jewish Telegraphic Agency (JTA) reports: “A broad array of Jewish groups backed the measure. With the status of ambassador, the envoy will have easier access to the secretary of state, increased funding and the office’s recommendations are likelier to be seen overseas as having the backing of the administration of the day.”

All past and present antisemitism envoys have been strong Israel partisans, several connected to Israel lobby organizations. Hannah Rosenthal officially adopted the new, Israel-centric definition and began using it to train American diplomats.

The  current envoy, Elan Carr, is a former member of AIPAC’s National Council and spent a year in Israel. His mother is an Israeli citizen, which suggests that he may have dual citizenship. Carr has been attending international conferences working to promote the Israel-centric definition around the world, most recently in Muslim countries.

A number of Jewish groups oppose Zionism both in the US and around the world – for example Canada, France, Britain, and South Africa, to name a few.

Carr has claimed that zionism, a political ideology, is a “central tenet” of Judaism, and calls Jewish Americans and others who disagree with this claim “anti-Semitic.” Similarly, he terms the international BDS movement, which “upholds the simple principle that Palestinians are entitled to the same rights as the rest of humanity,” anti-Semitic.

While the office is only mandated to monitor events internationally, Carr has also used his office to work domestically.

Following is a video that depicts daily life for Palestinians. This is the type of information that groups from Human Rights Watch to the Red Cross have documented: