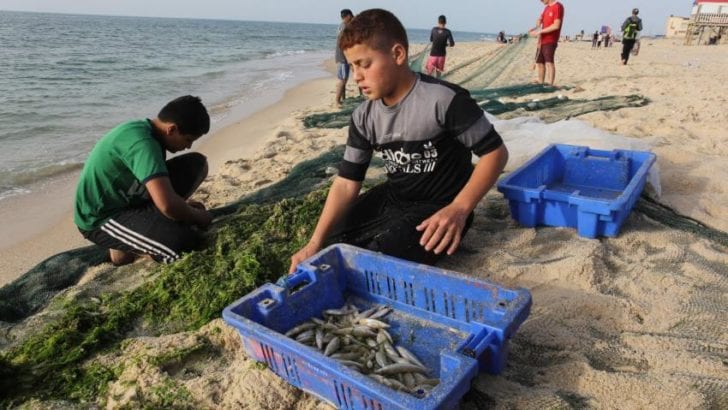 Israel has ordered Palestinian fishing to be completely halted the Mediterranean Sea.

In a move widely recognized as illegal under international law, Israel has forbidden all fishing in the waters off Gaza. Israel’s blame-the-victim rationale for the ban is to punish Palestinian protest against Israel’s now 14-year-old, illegal blockade of the enclave. Palestinian resistance groups launched several dozen small, homemade projectiles toward Israel in recent days – projectiles that rarely cause injury. In the 1990s, the Oslo Accords set the Gazan fishing zone at 20 miles, but Israel has unilaterally moved the boundary again and again as a form of collective punishment that impoverishes and starves the Palestinian population.

reposted from the New Arab, April 23, 2021
Israel said on Monday it is blocking Gaza waters to fishermen after rocket fire from the blockaded Palestinian enclave, an action that has been condemned as “collective punishment” on the local population.

The Israeli army said five rockets were fired from Gaza towards Israel overnight, two of which were intercepted by its air defences.

The measures mean that Palestinian trawlers will not be able to go to sea, causing further economic hardships for the Palestinian population in the besieged land strip already suffering from poverty and shortages.

“The fishing zone in the Gaza Strip would be completely closed until further notice,” said COGAT, the Israeli military body that administers civilian affairs in the occupied Palestinian Territories, including the West Bank.

Hamas, the ruling party in Gaza, said this decision was “a flagrant infringement on the rights” of the Palestinian people, Arabi21 reported.

Israel said the measure was “due to the continuation of the rocket fire from the Gaza Strip towards the State of Israel during the night,” it said in a statement, although rights groups have decried this as punishment on the whole Palestinian population In the enclave.

Israel said it would hold Hamas “accountable for all that is done in and from the Gaza Strip towards Israel”, COGAT said.

Rockets were fired at Israel from Gaza overnight Friday and again Saturday evening with Israeli airstrikes hitting the enclave.

Israel, which has imposed a blockade on Gaza for more than a decade, had set the fishing zone for the coastal enclave at 20 nautical miles following the Oslo peace accords in the 1990s.

But over the years Israel has reduced the size depending on tensions with Hamas.

In September, the fishing zone was set at 15 nautical miles after an agreement between Israel and Gaza’s rulers.