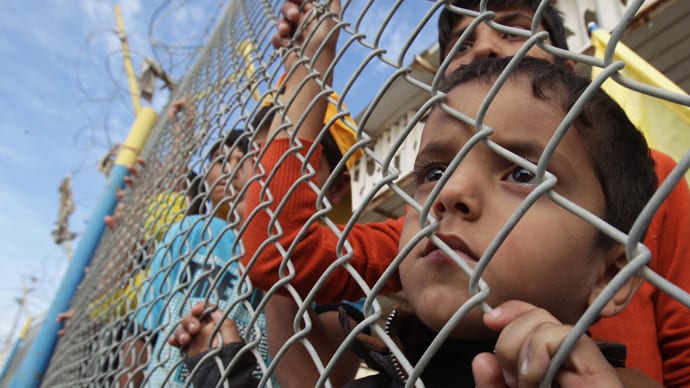 Occupation offers a life of hopelessness – especially for children.

Israeli settlers attacked a Palestinian 15-year-old in the northern West Bank, near Nablus, on September 6, beating and dragging him before throwing him off a stone fence.

Osama Daghlas, in a sworn testimony to Defense for Children International – Palestine, said he was sitting with his cousin in a northern area of Burqa when a group of more than 10 Israeli settlers approached from Homesh settlement, which borders the area. The group of settlers pursued and assaulted Osama, dragged him naked by his feet, and threw him around two meters (2.2 yards) to the ground.

“Several settlers were running behind me when suddenly I felt something hit the back of my head,” Osama told DCIP. “I regained consciousness intermittently and saw around five settlers dragging me. My clothes were completely torn and I was entirely naked.”

Osama’s cousin, Salah Daghlas, managed to escape. However, several of the settlers caught and pinned Osama to the ground.

“Around four settlers came towards me. One of them put his knee on my face while I was lying on the ground and another put my hands behind my back and sat on me,” Osama said.

He began to fall in and out of consciousness but estimated that the settlers dragged him on his back by his feet for around 500 meters (547 yards) towards Homesh settlement, beating him.

The group then threw him from a stone fence. He regained consciousness to see around 10 settlers standing on the stone fence above him. A settler then threw a sound grenade next to him before the group left Osama lying on the ground.

Hearing a loud sound, a shepherd came to the area and discovered Osama. The teen was treated at Rafidia hospital in Nablus.

The attack on Osama was the most recent in a string of violence incidents carried out by Israeli settlers this year. Settler violence has seen a sharp surge in the first half of 2017, according to the United Nations Office for the Coordination of Humanitarian Affairs (OCHA). After three consecutive years of decline, OCHA reported that Israeli settler attacks on Palestinians and their property has increased by a startling 88 percent from 2016, including seven child injuries.

According to international law, Israel has an obligation to protect the Palestinian population under military occupation. However, DCIP documentation shows that Israeli forces frequently fail to intervene in settler attacks.

“DCIP demands an investigation into the identities of the perpetrators of this attack,” said Ayed Abu Eqtaish, Accountability Program director at DCIP. “Repeated failure by the Israeli authorities to hold settlers accountable for attacks will continue to result in unchecked violence against Palestinian children.”

Meet Yanis, age 15, displaced for 3 years with no end in sight

Standing on the roof of Waleed Abd al-Jawad’s home, you can see the entirety of the northern West Bank’s Fara’a refugee camp, a mash of concrete buildings stamped into what looks like the middle of nowhere.

As Abd al-Jawad talks, his four-year-old daughter, Tasneem, weaves around lines of laundry on the roof, the sole open space where she and her six siblings play. While Fara’a is surrounded by agricultural land, these spaces are private and inaccessible.

Poverty, cramped homes, limited public space, and geographic isolation all separate children in Fara’a from their right to play.

Tasneem was born into refugee status in Fara’a. The refugee camp was among 58 the United Nation formed in the West Bank, Gaza, Syria, Lebanon and Jordan as temporary housing for some 750,000 Palestinians expelled from their homes in 1948.

Over the next seven decades, the tent grid would be replaced with concrete structures. Successive generations would be born into the remote camp offering few outlets and opportunities.

Tasneem’s two bedroom, 590 square foot home is too small to function as a bearable living space for her nine-member family. Her siblings, fearful to play in the camp’s narrow and car-packed streets, are pushed to the roof.

“It is not safe because people smoke there, and most of the games are broken and unsafe,” Sara said, adding that the camp park requires an entrance fee that most cannot afford.

Camp resident Abdul-Raheem Teim said that he, along with his five siblings, feel confined to the camp streets because they are forbidden from playing on the nearby private agricultural lands.

“There are no recreational places inside the camp,” the 16-year-old told DCIP. “The only place to play football and other similar games is the street.”

A British Mandate period prison formerly used by Jordan and Israel was rehabilitated and equipped with a soccer field. However, Abdul-Raheem said security guards prevented children in the camp from using the space.

The geographic isolation of Fara’a has also been detrimental to children’s access to services, according to the United Nations Relief and Works Agency (UNRWA). Refugee camps in other areas of the West Bank also have insufficient services, but are near cities or towns where they can access medical clinics, social services, and recreational spaces.

Aimad al-Shawish of Fara’a Popular Committee told DCIP that inadequate services force residents to travel to Tubas. While some residents obtain medical and social services as well as access to recreational space in the city, the journey is too expensive for many families to make regularly.

“I take the children to the UNRWA clinic in the camp, but most of the time they are transferred to public or private hospitals because of lack of medicine,” Abd al-Jawad said. The UNRWA clinic serves some 7,600 Fara’a refugees who live inside the camp’s one tenth of a square mile.

Director of Badil Resource Center for Palestinian Residency and Refugee Rights Nidal al-Azza told DCIP he believes that refugee children should be entitled to safe recreational spaces. Without them, he said, children can’t enjoy their right to play.

The central role of play in healthy child development has been widely established because of its impact on children’s cognitive, physical, and emotional funtioning. Without play, children are less able to regulate themselves, problem-solve, or develop age-approriate motor skills, along with many other competencies.

For this reason, the right “to engage in play” is enshrined in Article 31 of the Convention on the Rights of the Child.

But after 70 years of unresolved displacement and 50 years under Israeli military occupation, disagreements are common over who is legally accountable for addressing the needs of Palestinian refugees, al-Azza said. The result, he explained, is gaps in both protections and services for children living in camps.

“We need a clear agreement or regulation to clarify the responsibilities and duties between the PA, or the host country, and UNRWA,” al-Azza told DCIP.

A look back in history shows that two United Nations organizations were originally conceived to address the needs of newly homeless Palestinians in the aftermath of 1948.

In 1949, UNRWA was established to provide humanitarian emergency relief to refugees from inside the bounds of former British Mandate Palestine. It was meant to be a short-lived effort, that would disappear with the final status resolution and resettlement of this group.

No one anticipated UNRWA would still be in operaton today, let alone providing basic services to five million Palestinian refugees.

A second organization, the little known United Nations Conciliation Commission for Palestine (UNCCP) was formed one year earlier, in 1948. It was tasked with resolving the Palestinian refugee issue, but with an inherent flaw. Meant to be both a mediator between authorities in conflict and advocate for a “durable solution” that would guarantee protections for Palestinian refugees, the organization failed on both counts.

In 2017, UNRWA continues to call the world’s attention to the plight of Palestinian refugees but has no directive to negotiate a permanent solution.

The prolonged conflict in which Palestinian refugee camps stand stagnant has blurred the lines around which party should ensure particular rights of refugees. Amid many urgent and long-standing needs, questions like who should create spaces for tag and imaginative play get lost in the shuffle.

As Israel enters its 50th year of military control over the Occupied Palestinian Territory, it continues to ignore its obligation to guarantee the human rights of the Palestinian population it occupies.

The Palestinian Authority acts as host for Fara’a camp but has never achieved the status of a sovereign state, complicating its ability to fulfill its responsibilities.