You Are Here: Home → Bolton Means Another War for Israel is Coming

Bolton Means Another War for Israel is Coming 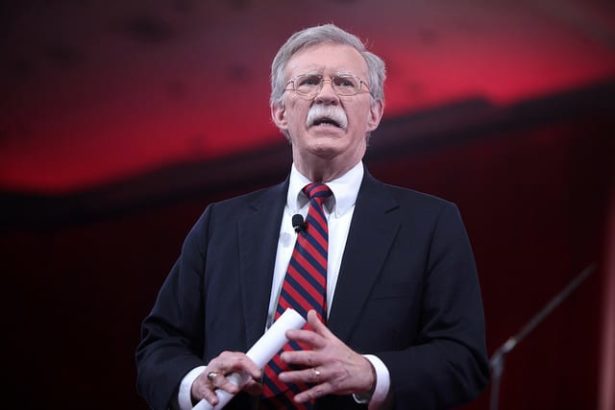 Newly appointed National Security Advisor John Bolton is expected to lead the rest of Trump’s hawkish team into war. It’s just a matter of time, according to Philip Giraldi, before the US will be fighting a war in which it has no actual stake for an ally with which we have no defense agreement.

With the appointment of leading neoconservative John Bolton as National Security Advisor, the Zionist war-party takeover of the White House is nearly complete. With Mike Pompeo as Secretary of State, Nikki Haley at the U.N. and now Bolton whispering in the President’s ear, we have a fully endowed war cabinet that will make sure the Mullahs, Russkies and Rocket Man begin to pay attention. As Haley laid down the law in the United Nations last week, “Our patience is not unlimited.”

Bolton, the point man for Israeli-American casino billionaire and GOP kingmaker Sheldon Adelson, will be the spark plug that ignites a new round of warfare on behalf of Israel. Bolton has long been planning to attack Iran. He secretly and illegally met with Israel’s Mossad intelligence service in 2003-4 when he was in the State Department under George W. Bush to lay the groundwork for such a conflict. Today, right-wing Israelis are certainly cheering his appointment. Naftali Bennett, a member of Prime Minister Benjamin Netanyahu’s security cabinet, has already praised the move, calling Bolton “an extraordinary security expert, experienced diplomat and a stalwart friend of Israel”.

War is likely to start in the Middle East as Iran, Lebanon and Syria are relatively soft targets with only limited capability to strike back. As neocon pundit Michael Ledeen put it put it,

Every ten years or so, the United States needs to pick up some small crappy little country and throw it against the wall, just to show the world we mean business.

There have been numerous indications that Israel is preparing for war. Its planning clearly includes deliberately involving the United States in the conflict, making turning American soldiers into de facto hostages, with U.S. casualties guaranteeing Washington’s direct and immediate involvement in the fighting.

Largely unknown to the American public, the United States has just completed the largest ever joint military exercises with Israel even though it has no defense agreement or treaty with Tel Aviv. That is, in part, because military alliances are dependent on an attack on one partner mandating support from all parties to the agreement. Israel has balked at such an arrangement because it cannot define its own borders, which are constantly expanding.

The recent maneuvers featured scenarios in which U.S. troops fought Syrians, Lebanese and Palestinians in a mock-up Arab village to defend Israel. Washington’s particularly vulnerability vis-à-vis Israel derives from the recent opening of a U.S. permanent facility at Mashabim Air Base in the Negev Desert. It is described as a base within a base, completely contained by an Israeli air force installation and operating “under Israeli military directives,” meaning that if the facility is attacked Americans will likely die. It has no function in support of U.S. regional interests but is instead a shell facility with a few dozen airmen that can be ramped up considerably if Israel goes to war and calls for American assistance. Together with billions of dollars-worth of U.S. military equipment that is pre-positioned in Israel and can be used by the Israelis as needed, it is all about supporting Israeli war-making and has nothing to do with American security or defense interests except as a tripwire to bring about U.S. involvement.

For that reason, all of the above is something more than just the latest “we have to support Israel” gimmick. The American soldiers and airmen who are now based in Israel are the sacrificial lambs that will guarantee U.S. entry into a war that Israel intends to start, make no mistake about that. A group of U.S. Senators who have just returned from Israel have confirmed that Netanyahu’s government is preparing for a major regional war. Their recommendation? Give Israel more money so it can “defend” itself, a proposal that might be well received in the White House, which is also itching to confront both Syria and Iran. In addition to Bolton, Secretary of Defense James Mattis, former National Security Adviser H.R. McMaster and the President himself have all been particularly ratcheting up the rhetoric against Iran. At the U.N., Nikki Haley betrayed her ignorance of international law and the U.N. Charter, recently warning that the U.S. is prepared to attack Syria again because “…there are times when states are compelled to take their own action.”

When Israel attacks Syria and/or Lebanon, as it clearly intends to do, Hezbollah will retaliate with its missiles, some of which will surely be directed towards the Mashabim Air Base, which will be targeted to inhibit the base’s ability to bomb Lebanon. And once Washington is well and truly engaged in what is referred to as “force protection,” Israel will undoubtedly widen the conflict by drawing Iran in through attacks on that country’s identified bases in Syria that are supporting the al-Assad regime. The bigger war will suddenly become America’s responsibility after Israel inevitably proves itself incapable of handling the escalation.

During the recent bilateral military exercises, Air Force Lieutenant General Richard Clark enthused that American soldiers are “prepared to die for the Jewish state” and also added that they would “probably” be under the command of Israeli Air Force General Zvika Haimovitch, who would decide on the involvement of U.S. personnel. Haimovitch commented “I am sure…we will find US troops on the ground…to defend the state of Israel.”

I somehow doubt if General Richard Clark would be so sanguine if his own son were told to prepare to die for the Jewish state. And I have to wonder if the good general has considered Article 1, Section 8, Clause 11 of the Constitution about declaring war or the 1973 War Powers Act or the issue of national sovereignty itself in allowing another country to declare war for you. General Clark is a perfect example of how we have been sold out by the people we have honored and rewarded to defend our country when it comes to pandering to Israel. He and Bolton as well as the other Administration hawks clamoring for more war for Israel are a national disgrace.