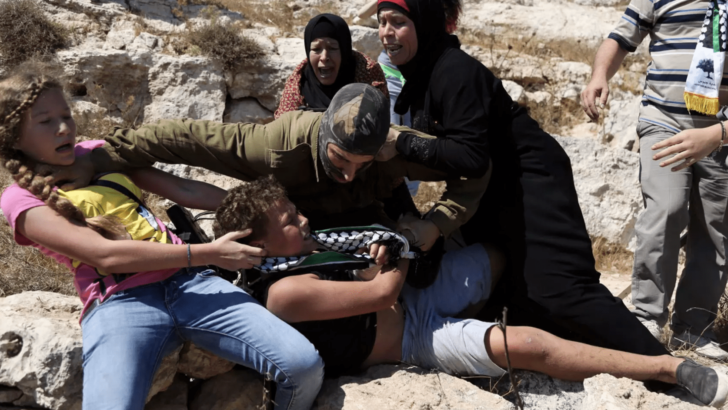 August 28, 2015: Palestinian women and youth scuffle with an Israeli soldier in the West Bank. Tamimi is seen on the left. Credit: AP

By trying to make an example out of Ahed Tamimi’s arrest, Israel helped transform her into an anti-occupation poster child

Over the past eight months, anti-Israel protests from London to Washington had a new poster child. The image of Ahed Tamimi’s blue eyes staring defiantly underneath her mane of golden curls has become a symbol around which the Palestinian cause worldwide has been able to rally.

When Israel arrested and imprisoned the teenager for kicking and slapping an Israeli combat soldier in the West Bank – the footage soon went viral.

Whether it was “Free Ahed” signs held up in protest marches or her image spray-painted on the West Bank separation barrier – a move that got the Italian artists arrested – her likeness has been everywhere.

Israeli authorities are unswerving in their belief that they sent an important message by cracking down on the now 17-year-old girl from Nabi Saleh, who was part of a group of girls harassing several soldiers in the West Bank.

Israel’s intention to turn her into an object lesson was clear.

“Those who harm our soldiers by day are arrested by night,” declared Defense Minister Avigdor Lieberman, after Tamimi was taken from her home in the middle of the night last December, four days after the incident occured and she had become an internet sensation.

The Israel Defense Forces spokesperson’s unit made a point of distributing footage of her arrest to the media the next morning. In doing so, it helped turn Ahed Tamimi into a symbol of resistance.

By the time Tamimi was released Sunday, after completing her eight-month sentence for four counts of assault, she had graduated from viral web star into an icon.

Capped by the fanfare around her release, her detention ultimately did more damage to Israel’s international image than the initial video of her slapping a soldier ever could.

During her incarceration, Tamimi has been compared to brave female heroes ranging from Joan of Arc and Anne Frank to Rosa Parks and Hannah Szenes, and her blonde hair even drew comparison to Bar Refaeli. She has been championed by American celebrities such as Sarah Silverman, Alice Walker, Danny Glover and Rosario Dawson, and in Israel, controversially, by songwriter-performer Yehonatan Geffen.

One protest sign spotted at a rally outside this year’s AIPAC Policy Conference in D.C. declared that she was “the REAL Wonder Woman.”

It is the same type of publicity “own goal” that has been replicated this summer in the highly publicized moves to prevent BDS activists from entering Israel, thus turning unknowns into high-profile names.

In Tamimi’s case, she is maintaining a family tradition – not only by publicly resisting the Israeli occupation, but also by weaponizing Israel’s measures to galvanize world sympathy for the Palestinian cause. (The Israeli media dubbed Ahed Tamimi “Shirley Temper” after she was seen hitting an Israeli soldier back in 2012 and when she was photographed biting another soldier who was trying to arrest her mother in 2015.)

It was in 2009 that her father, Bassem Tamimi, first began rallying international sentiment with weekly village protests that he initiated with the goal of “modeling a popular uprising.”

He mobilized fellow residents of Nabi Saleh, some 20 kilometers (12 miles) northwest of Ramallah, against settlers who were attempting to take over their water spring and refusing them access to it. The demonstration grew into a general protest over the expansion of the settlement of Halamish on land belonging to the village.

Over the years, clashes between protesters and the Israeli army led to stone-throwing, tear gas, grenades and live fire, which resulted in injury and, sometimes, death – including to members of the Tamimi clan.

Throughout Ahed’s childhood, her father was arrested a dozen times on a variety of charges. At one point, he was held without trial (“administrative detention”) for over a year.

Bassem’s incarceration in 2011 for leading the unauthorized protest marches became a cause célèbre globally, with Amnesty International dubbing him a “prisoner of conscience” and demanding that Israel release him.

When he was freed on bail in April 2012 two weeks after his mother suffered a stroke, he also received a hero’s welcome back to Nabi Saleh.

Other members of the Tamimi family have paid a higher price. In 2011, Bassem’s cousin, Mustafa Tamimi, died when he was hit in the face at point-blank range by a tear gas canister after throwing stones at soldiers. A year later, Bassem’s brother-in-law, Rushdi Tamimi, was shot in the back and killed when a group of Palestinians in Nabi Saleh began throwing stones toward the road from a long distance. An army reserve unit dispersed them with a hail of 80 bullets. And at the end of 2017, prior to Ahed’s arrest, her cousin Mohammad Tamimi was shot in the head with a rubber-tipped bullet.

Critics of the family’s image as a symbol of brave and nonviolent resistance point not only to stone-throwing, but to the fact that their relatives include participants in terrorist activities. They also highlight social media posts and declarations by the Tamimis that can be interpreted as celebrating violence against Israelis and calling for the Jewish state’s “elimination.”

Deputy Minister Michael Oren was so frustrated by the viral PR phenomenon that he charged in a tweet that the Tamimis “may not be a real family” and that they “dress up kids in American clothes and pay them to provoke IDF troops on camera. This cynical and cruel use of children constitutes abuse. Human rights organizations must investigate!”

The Tamimis ridiculed the claim.

The Tamimi family—which may not be a real family—dresses up kids in American clothes and pays them to provoke IDF troops on camera. This cynical and cruel use of children constitutes abuse. Human rights organizations must investigate!
https://t.co/Pm5nXhcbo0 via @wallanews

Ahed Tamimi had traveled overseas to represent the Palestinian cause before she sat in an Israeli prison. But the past 18 months raised her profile to a whole new level.

Ultimately, her arrest, trial and sentencing had two underlying purposes. The first, as Haaretz’s Anshel Pfeffer wrote after she was first arrested, was to address the Netanyahu government’s domestic political problem: Salvaging the Israeli military’s pride in the face of a soldier allowing Ahed Tamimi and other young women to hit him without retaliating. “A Palestinian girl slapping an IDF officer was a national insult that could only be soothed by the pictures of her being taken from her home by female Border Police officers in full body armor,” Pfeffer wrote.

The second – as numerous Israeli officials, led by Defense Minister Lieberman insisted – was to deter young Palestinians who would consider following in her footsteps by showing them that public resistance carries a heavy price.

But considering Israel’s focus on winning the public diplomacy war (aka hasbara), the government’s hand in elevating the status of a local celebrity into an international symbol of the Palestinian cause was a move that was doomed to backfire.