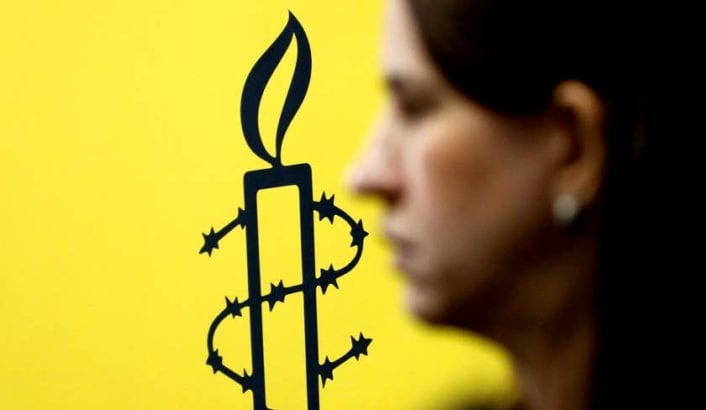 Following a report that the U.S. plans to label Amnesty International, Human Rights Watch and Oxfam ‘antisemitic’ over the groups’ criticism of Israel and support for Palestinian human rights, Amnesty slams ‘attempt to silence and intimidate’ human rights organizations

By Noa Landau, reposted from Ha’aretz

Amnesty International USA slammed U.S. Secretary of State Mike Pompeo’s reported push to label the organization as antisemitic on Thursday, saying his “baseless accusations are yet another attempt to silence and intimidate international human rights organizations.”

Politico reported on Wednesday that the State Department was considering declaring Amnesty International, Human Rights Watch and Oxfam as antisemitic and declare that U.S. policy is not to support the groups. According to the report, the announcement is expected to come in a report from the office of the White House’s antisemitism czar, Elan Carr, which would allege that the groups support the Boycott, Divestment and Sanctions movement.

Amnesty’s statement said that the group is “deeply concerned that conflating antisemitism with legitimate criticism of Israeli government policy is detrimental not only to ending serious crimes under international law but also to efforts to address and end antisemitism – and it may encourage other countries to make such baseless claims.”

[RELATED: International campaign is criminalizing criticism of Israel as ‘antisemitism’]

It further asserted that the group condemns settlements as illegal and that its research has shown a close correlation between settlements and violations of Palestinians’ human rights.

“We know that the governments of many countries, including the United States’, would rather not have their human rights violations exposed,” read the statement. “It is concerning to see Secretary Pompeo join the list of people and governments that use accusations of antisemitism to try to sweep human rights abuses under the rug.

“Any process aimed at a just and sustainable peace in Israel and the State of Palestine must include an end to systematic human rights abuses, dismantling of illegal Israeli settlements, and justice and reparation for victims of crimes under international law,” the statement concluded. “This is what international norms demand, whether Secretary Pompeo likes it or not.”

Noa Landau is Haaretz’s diplomatic reporter, who covers Israel’s foreign relations, and a member of the newspaper’s editorial board. Prior to this, she served as head of the news department and editor of Haaretz English Edition.

Before joining Haaretz, Landau worked as a news reporter and editor for Galei-Tzahal, Channel 10 and Maariv. She is also an Advisory Board member at the Reuters Institute for the Study of Journalism at the University of Oxford, where she studied the rise of gag orders in Israel. Got a scoop? Email her here: noa.landau@haaretz.co.il