You Are Here: Home → In America, the Right to Boycott Israel Is Under Threat. This Is Why That’s Cause for Concern

In America, the Right to Boycott Israel Is Under Threat. This Is Why That’s Cause for Concern 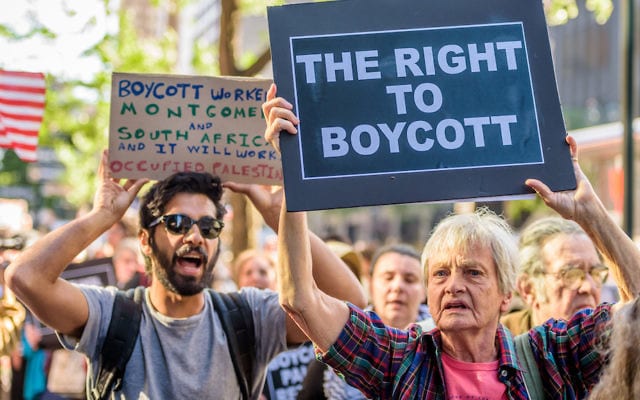 Protest in New York, June 9, 2016. The ACLU has filed suit against a Kansas law against boycotting Israel. Such laws violate the First Amendment guarantee of free speech, as stated by the Supreme Court in 1982. “From the Boston Tea Party to the Montgomery bus boycott to the campaign to divest from businesses operating in apartheid South Africa, political boycotts have been a proud part of this country’s constitutional tradition.”

The First Amendment squarely protects the right to boycott. Lately, though, a legislative assault on that right has been spreading through the United States –  designed to stamp out constitutionally protected boycotts of Israel.

In a landmark decision from 1982, the Supreme Court ruled that an NAACP boycott of white-owned businesses in Mississippi, to protest segregation and racial injustice, was a protected form of free association and free expression. As the court recognized, political boycotts empower individuals to collectively express their dissatisfaction with the status quo and advocate for political, social, and economic change. These are precisely the freedoms the Constitution is meant to protect.

Yet over the past several years, state and federal legislatures have considered dozens of bills, and in some cases passed laws, in direct violation of this important ruling. These bills and laws vary in numerous respects, but they share a common goal of scaring people away people from participating in boycotts meant to protest Israeli government policies, including what are known as Boycott, Divestment, and Sanctions (BDS) campaigns.

Today, the ACLU filed a lawsuit challenging one of those laws — a Kansas statute requiring state contractors to sign a statement certifying that they do not boycott Israel, including boycotts of companies profiting off settlements in the occupied Palestinian territories.

People have very strong feelings on all sides of this issue. The ACLU takes no position for or against campaigns to boycott Israel or any other foreign country, but we have long defended the right to participate in political boycotts. We must do so again.

We are representing a veteran math teacher and trainer from Kansas who was told she would need to sign the certification statement in order to participate in a state program training other math teachers. Our client is a member of the Mennonite Church USA. In response to calls for boycott by the church and members of her congregation, she has decided not to buy consumer goods and services offered by Israeli companies and international companies operating in Israeli settlements in the occupied Palestinian territories. Our client is boycotting to protest the Israeli government’s treatment of Palestinians and to pressure the government to change its policies.

Earlier this year, our client was selected to participate as a contractor in a statewide training program run by the Kansas Department of Education. She was excited to use her skills to help train math teachers throughout the state, but when she was presented with a form requiring her to certify that she “is not currently engaged in a boycott of Israel,” she told the state that she could not sign the form in good conscience. As a result, the state refuses to let her participate in the program. [more details below]

Kansas’s law, and others like it, violates the Constitution. The First Amendment prohibits the government from suppressing one side of a public debate. That means it cannot impose ideological litmus tests or loyalty oaths as a condition on hiring or contracting.

This principle was famously tested in the McCarthy era, when many state laws required government employees to declare they were not members of the Communist Party or other “subversive groups” in order to keep their jobs. The ACLU successfully challenged many of those laws on constitutional grounds, and anti-Communist loyalty tests have been mostly relegated to the dustbin of history.

The same rule applies when the government asks someone to certify that they are not engaged in a boycott of Israel.

Kansas should not be dictating political orthodoxy for its contractors. Although the government may impose reasonable restrictions on employee or contractor speech when it relates to their job duties or causes disruption in the workplace, people do not lose the right to participate in politics or speak out on issues of public concern just because they get paid by the state.

By requiring all state contractors to certify that they are not engaged in a boycott of Israel, Kansas’s law unconstitutionally disqualifies people from working for the state based on protected expression and association that has nothing to do with their jobs.

From the Boston Tea Party to the Montgomery bus boycott to the campaign to divest from businesses operating in apartheid South Africa, political boycotts have been a proud part of this country’s constitutional tradition.

That’s why the ACLU has opposed anti-boycott bills in state legislatures for the past several years. That’s why we’ve come out against the Israel Anti-Boycott Act in Congress. And that’s why we’re suing to challenge Kansas’s unconstitutional anti-boycott law.

The lawsuit was brought on behalf of Esther Koontz, a math and science curriculum coach at a Wichita public school, seeks to overturn a law that took effect July 1 and prohibits the state from entering into contracts with individuals or companies participating in a boycott of Israel. Twenty-one states have such policies, from liberal California to conservative strongholds such as Alabama and Texas; in Kansas, the measure had strong bipartisan support.

Get The Times of Israel’s Daily Edition by email and never miss our top stories FREE SIGN UP
States have enacted their laws in recent years amid an increasingly visible movement protesting Israel’s policies toward Palestinians. Backers of boycotting Israeli companies argue that they’re defending Palestinians’ human rights, while boycott critics contend the goal is to destroy the Jewish state.

“The government does not get to use its leverage to silence one side of the debate,” Brian Hauss, an ACLU attorney, told The Associated Press. The ACLU is asking to have enforcement of the law blocked while the case proceeds.

Supporters of the Kansas law argue that it doesn’t prevent people from protesting Israel’s policies or boycotting Israeli companies but just requires them to forgo state contracts if they do. Supporters contend the state has the right to choose its contractors.

During the Kansas Legislature’s debate earlier this year, state officials also described Israel as an important trading partner, with Kansas exporting $56 million worth of products there in 2016 while buying $83 million worth. Republican Gov. Sam Brownback made an unpublicized visit to Israel in late August and early September, during which he met with Prime Minister Benjamin Netanyahu.

“Boycotts of Israel are really a discriminatory effort by a few people who aren’t necessarily interested in a peaceful resolution in the Middle East,” said Jacob Millner, Midwest regional director for the Israel Project.
But Dima Khalidi, executive director of Palestine Legal, a group supporting pro-Palestinian advocates, said the Israel government and pro-Israel groups unfairly attempt to paint boycott backers as radicals or terrorism supporters.

The lawsuit says Koontz, who lives about 25 miles (40 kilometers) north of Wichita in north Newton, is a Mennonite and the wife of a pastor. She decided to boycott Israeli products and services to “support the Palestinians’ struggle for equality.”

In July, a Mennonite Church USA convention voted to sell its holdings in companies profiting from the Israeli occupation of Palestinian territories, joining the Presbyterian Church (USA) and the United Church of Christ in approving such divestment measures.

A Kansas State Department of Education official told Koontz in August that she could not be paid as a teacher trainer. The lawsuit names the department’s head, Education Commissioner Randy Watson, as the defendant.

“This lawsuit is a really important step to make sure that our right to dissent is protected,” Khalidi said.