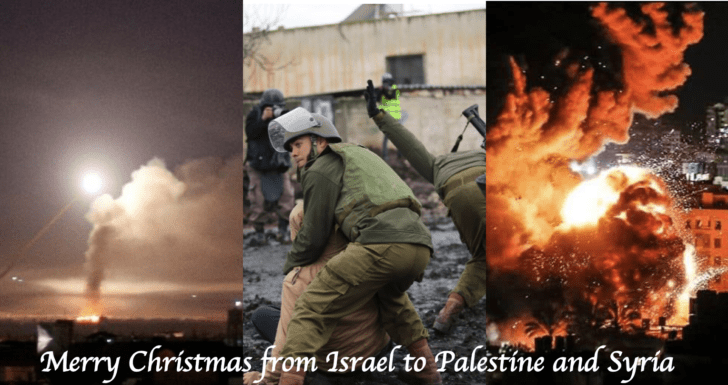 Israel had a busy Christmas, causing fear with airstrikes over Gaza and Syria, as well as an invasion of the Palestinian town of Kufur Qaddoum as it peacefully protested.

While Americans were busy zooming with loved ones on Christmas, and mainstream media reported on the explosion in Nashville and Covid-19, Israel was causing explosions amid pandemic conditions in the Palestinian territories and Syria.

Israeli reports allege that two rockets were fired from Gaza toward Israel (this claim is disputed – see below), and were intercepted by the Iron Dome defense system, without damage or injuries.

Israeli policy holds Hamas responsible for all aggression from Gaza, regardless of its source – a policy that refuses to acknowledge the many factions within Gaza that operate independently of Hamas.

Palestinian resistance groups in Gaza began firing rockets after Israel had invaded and shelled the area in 2001. They have killed approximately 30 Israelis, while Israeli airstrikes have killed over 4,000 Gazans.

According to AP, Israel retaliated for the pair of rockets by launching airstrikes – allegedly targeting a Hamas rocket manufacturing facility, as well as Hamas training and military posts.

Reports from Gaza, however, indicate that a children’s hospital, a rehabilitation center for people with disabilities, and a mosque, as well as private residences, were damaged. A six-year-old and an adult were injured, and much of the region lost water and power.

Hourea (not her real name), who lives in the Maghazi refugee camp just a mile from one of the attack sites, described the six-hour attack:

We felt a tremor inside the house, the sound was very violent. The children woke up at night crying and we soothed them…[They] were asking us whether there would be a war. It was a terrifying night and the bombing was violent. Thank God we were spared.

Hourea added that to her knowledge, no rockets had been fired from Gaza before the attack – suggesting that the airstrikes were incitement from Israel.

According to AP, rocket fire from Gaza and airstrikes from Israel have

largely been subdued in recent months due to the raging coronavirus outbreak…Hamas charges that Israel doesn’t honor its truce obligations, which include easing a crippling blockade on the Palestinian enclave, and allowing for large-scale infrastructure and job-creation projects.

The impoverished and densely populated Gaza Strip has been under a crippling Israeli blockade since 2007, after Hamas took over the coastal enclave. Israel has launched three offensives against the Gaza Strip since 2008, and there have been numerous flare-ups.

IMEMC News reports that a child and a teenager were injured and dozens were overcome by tear gas.

Israeli soldiers invaded the town, broke into a number of homes in order to take positions on their roofs, and shot at the protesters.

Kufur Qaddoum has been the site of weekly demonstrations since 2011, in protest of Israel’s illegal occupation of Palestine and the Separation Wall. Israeli forces have obstructed the event regularly: in 2020 alone, they have shot 100 residents and arrested 170. (Read more about Kufur Qaddoum protests here.)

The Palestinian Center for Human Rights (PCHR) keeps a tally of Israeli abuses throughout the occupied Palestinian territories. The group reported that between Thanksgiving and Christmas, Israeli forces violated international law 764 times, including using excessive force that wounded 60 Palestinians, and arresting 332 Palestinians.

The Washington Post reported that Israeli jets also carried out airstrikes over several locations in Syria – a common practice, as Israel expressed a desire to destroy supposed weapons shipments from Iran and Hezbollah weapon manufacturing facilities. At least six Syrians were killed in the attack.

Jordanian news agency Al Bawaba stated that most of the Israeli missiles were intercepted by Syria’s anti-missile apparatus, adding,

The Israeli regime and Syria are technically at war due to the former’s 1967-present occupation of the Arab country’s Golan Heights. Starting in 2011, Tel Aviv has also been providing instrumental support to anti-Syria militant and terrorist groups.