You Are Here: Home → A Palestinian musician describes her ordeal at Ben Gurion Airport

A Palestinian musician describes her ordeal at Ben Gurion Airport 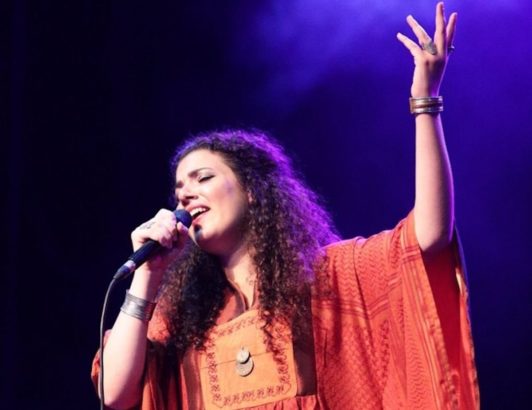 Nai Barghouti is a Palestinian singer, flute player and composer studying music at the Amsterdam Conservatory of Music. (Photo from Mondoweiss)

I shall go on resisting Israel’s racism with my music, and one day I may make a difference in my people’s struggle for liberation. The airport guard, however, will continue to search Palestinians’ underwear, to lie about our laptops, and to be an insignificant tool of a system of racist oppression…

By Nai Barghouti, reposted from Mondoweiss

Before packing my suitcase the night before, I made a packing list to make sure I didn’t forget anything. I managed to cross everything off the list and be at the airport on time. But there was one thing I forgot to write down… one very important detail that I simply forgot to think about… I am Palestinian!

Like all Palestinians carrying Israeli citizenship and living under Israel’s regime of apartheid, I always have a bad feeling about going to the airport, and this time was no exception. The flu I caught a night before did not help either. My mother, who drove me to the airport, was really worried about a military checkpoint on the way that could make me miss my flight, but we got “lucky” this time.

A colonial military occupation, brutalizing you for so many years, can really mess up your expectations. Crossing a military roadblock starts giving you this strange feeling of achievement. Your basic human rights become a privilege rather than the norm, and that becomes the new norm.

One of the most dangerous aspects about regimes of colonial oppression is that they strive to occupy the mind of the oppressed, not just their land.

We arrived at the airport, and I was trying to convince my mother not to wait for me to finish the dehumanizing “security” check like she always does. While I always love to see her face at a distance, behind the thick glass, waiving her reassuring hand, I really hate to see her angrily but helplessly observe the racist Israeli security officials trying to humiliate me just because of who I am—a Palestinian. I begged her to leave, but she insisted: “I can’t just leave you in this horrible place. You never know what happens.” She was right!

My Arabic name on my passport immediately gave away my identity, inviting their “royal” treatment. When the security officer asked me whether I spoke Hebrew and I said no, her anger was visible. When she asked me what I was doing in Amsterdam and I answered that I was studying jazz, she could no longer contain her racist vibes. How could I so bluntly destroy her bigoted stereotype of “Arab women”? She told me I had to undergo an intrusive “body search.”

[Editor’s note: If Americans Knew first revealed this Israeli practice in 2007, with additional reports here, here, and here, and a video here.]

I immediately accused her of racism, of racial profiling and of being vengeful against me because of who I am and what I do. She shouted back that she was doing her job. I reminded her that many unspeakable crimes in history have been perpetrated under that immoral excuse.

She took her revenge by claiming that my laptop did not pass her security check and therefore cannot go with me on the plane. This is despite the fact that she asked me to open it and turn it on, which I did successfully. She said they would send it by mail to my address in Amsterdam. I laughed at her audacity and objected strongly. I know from my own experience, and from other Palestinians’ experiences, that leaving your laptop with Ben Gurion airport security invariably means it will be hacked, damaged or “lost.”

I told her that I cannot travel without my laptop as all my music and lecture notes are on it and without that I cannot go to any of my classes.

Her supervisor supported her vindictive decision, so I was forced to miss my flight. I took my laptop and walked out to where my mother was anxiously waiting. She greeted me with the warmest of hugs and a few tears and said, “Don’t worry about a thing, we’ll find a solution. I am so proud of you!”

The next day, she drove me to the land crossing with Jordan. After spending a lovely night with family in Amman, enjoying my great-aunt’s famous white cheese and spinach pies, I traveled through the welcoming Amman airport and arrived in Amsterdam safe, with my laptop and with my dignity intact.

As furious as I am at the Israeli security officer’s ugly racism and vengefulness, I felt slightly bad for her. Despite her best efforts to humiliate me, I shall go on resisting her state’s racism and apartheid with my music, and one day I may actually make a difference in my people’s struggle for liberation. She, however, will continue to search Palestinians’ underwear, to lie about our laptops not passing security checks, and to be an insignificant tool of a system of racist oppression.

As I was about to get out of the airport, I raised my voice to make sure my finale reaches as many people in the airport as possible. “You know what is very close to Amsterdam? The Hague. One day, you and your leaders will be prosecuted for crimes at the International Criminal Court there.”

She remained silent and looked down, and I walked out with a smile, my head held up high, and saw mama’s hand still waiving.

Nai Barghouti is a Palestinian singer, flute player and composer studying music at the Amsterdam Conservatory of Music.