You Are Here: Home → 3rd day of collective punishment: 16 villages “imprisoned in their homes”

3rd day of collective punishment: 16 villages “imprisoned in their homes” 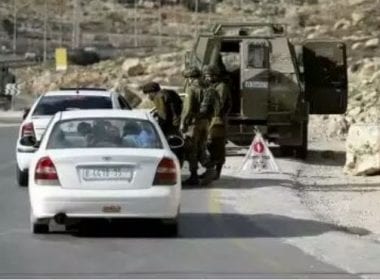 The Israeli army continued, for the third consecutive day, the complete isolation of sixteen Palestinian villages, northwest of occupied Jerusalem, in addition to closing various roads and continuing the state of curfew, imprisoning the villages in their homes, and causing the closure of fifty schools.

The army also imposed curfew in the sixteen villages, imprisoning the Palestinians in their homes, and resulting in closing fifty schools, providing education for more than 4000 students.

The soldiers also invaded, violently searched and occupied several homes, after forcing the families out from many homes in Biddu and Beit Surik, and informed some families of their intention to remain in their properties indefinitely.

In addition, the army issued many demolition orders targeting homes, in addition to halting the construction of many other homes.

Furthermore, the soldiers continued the violent and extensive searches of homes in Beit Surik town, which is also under curfew, and distributed leaflets, threatening to kill the Palestinians who leave their homes, or “violate the army’s commands and directives.”

The latest Israeli violations are acts of collective punishment against thousands of Palestinians in the aftermath of the fatal shooting, which was carried out by Nimir Mahmoud Jamal, 37, who opened fire, on Tuesday morning, on a group of Israeli Border Police officers, and armed security guards, killing three and wounding a fourth at the main entrance of Har Hadar illegal Israeli colony.

Nimir was then shot and killed by the remaining Israeli border guards at the entrance of the settlement colony.