You Are Here: Home → WND: Sanhedrin bans all messianic Jewish marriages in Israel 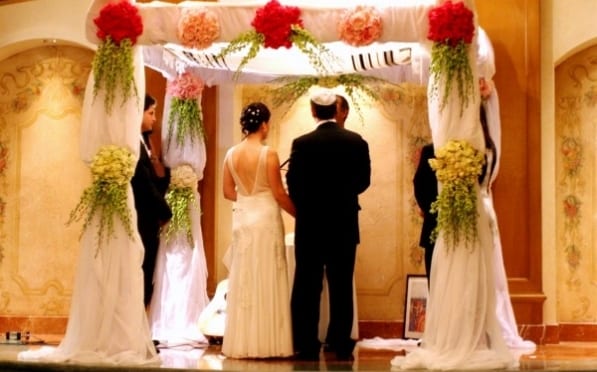 Jewish weddings in Israel are conducted under the authority of a religious council known as a rabbinic court or Sanhedrin.

The state of Israel’s religious establishment is taking its persecution of Messianic Jewish believers in Jesus to a new level.

A rabbinic court, or Sanhedrin, has ruled that a Jew who believes in Jesus as the Jewish Messiah is no longer considered a Jew for purposes of marriage in Israel. This makes it impossible for two Messianic Jews to get married inside the country.

“An Israeli couple who are Messianic Jews cannot marry in a traditional Jewish religious ceremony in Israel because they are considered converts to Christianity, a rabbinical court ruled on Tuesday,” according to the Israeli newspaper Haaretz.

It was the first time a rabbinical court has ruled on the issue of the status of Jews who believe in Jesus as Son of God, after a Messianic couple requested they be married in Israel according to Jewish law or “halacha.”

The couple was essentially told they would need to deny their faith in Jesus as the Son of God to have a state-recognized Jewish wedding ceremony in Israel.

All marriages in Israel are controlled by religious authorities, whether Jewish, Islamic, Christian or Druze, according to laws first handed down under the Ottoman Empire. These laws were retained by the British Mandate and continued after the state of Israel was founded in 1948.

The judges wrote that if the couple “declares before the court they have completely given up their Christian beliefs, including their belonging to a Messianic Jewish community and missionary activities, the court will discuss their matter anew.”

The two in question were both born Jewish, according to Haaretz, and submitted a marriage request at their local rabbinate in Shoham, central Israel. According to halacha, they are seen as Jewish because even Jews who convert to another religion can still be considered Jewish.

Because of the seriousness of the issue, the case was given to a special panel of three very senior judges: Rabbi Zevadia Cohen, head of the rabbinical court, Rabbi Ahiezer Amrani and Rabbi Zvi Ben-Yaakov, Haaretz reports.

The judges consulted with a scholar on Christianity and missionary cults, as well as speaking with and questioning the couple.

“Although I was disappointed to see the decision of the rabbinic court, it doesn’t surprise me at all,” said Dr. Michael Brown, a Messianic Jewish scholar and author of many books on Christianity and Judaism, including “The Real Kosher Jesus.”

“In the eyes of most Orthodox Jews, Messianic Jews are heretics and idolaters, unworthy of being part of the larger Jewish community, even though they would consider us still Jews,” Brown told WND. “Many of them want to keep us out of Israel entirely, so refusing to grant two Messianic Jews an official rabbinic wedding is in keeping with their hostility toward us.”

Still, the decision is disappointing, he said, since all official Jewish weddings performed in Israel must be done by Orthodox rabbis, “who would gladly perform a ceremony for two atheists.”

“So we should protest this decision to the government while still recognizing that our calling to follow Yeshua will bring us persecution and rejection.”

Messianic Rabbi Zev Porat is founder of the Tel Aviv-based Messiah of Israel Ministries. He grew up an Orthodox Jew, and his grandfather, Rabbi Pinchas Porat, was a Holocaust survivor who later became one of the heads of the Sanhedrin in Israel.

Contacted Thursday by WND, Porat was not at all happy about the rabbinic court’s ruling.

He said this decision will deprive people of retirement, medical and other benefits that come with a state-recognized marriage. He said Israel’s Ultra-Orthodox Jewish leaders are celebrating this move because they have long been “furious” about Jews coming to Jesus Christ.

Porat said in an email to WND it is very important for Jewish believers in Messiah to keep their Jewish identity.

“A shocking new law passed in Israel by the Sanhedrin forbids the marriage of Messianic Jews in Israel. According to the Sanhedrin (Rabbinic Court), a messianic Jew is no longer a Jew but is now a Christian,” he said. “It is unprecedented and is the first time in Israel’s history since its inception in 1948 that the Messianic Jews are being targeted.”

The new law will have huge ramifications for the Messianics in Israel, he said.

“Currently, if one gets married in Israel, it must be in a rabbinic court. It is mandatory even for atheists, so we can see what dire consequences this new law will have on Messianic believers desiring to marry, as they will not be allowed to marry in a rabbinic court, which is where they get the document that is ultimately validated by the Ministry of Interior.”

They will now be required to leave Israel, get married, return and apply for this certification of marriage to the Ministry of Interior.

“The ministry, of course, will delay the certification and legitimization of their marriage for up to as many as five to seven years,” he noted. “While they are waiting, by design, the Ministry is going to make this process as difficult as possible because the ultimate goal is for the Messianic believers to vacate Israel all together.”

While waiting for this lengthy process, their rights will be grossly limited, the rabbi said.

“They can live there but they cannot be deemed as ‘married,’ which would afford them certain rights in Israeli law, but now with this new law in place by the Sanhedrin ‘Rabbinical Courts,’ which control most everything in Israel. Nothing has changed in 2,000 years, the same anti-Yeshua demonic spirit is operating in Israel today.”

This ruling did not just pop out of nowhere, he said.

“What is the true motivation behind this new law? Jews to leave, get out of Israel and go preach your Jesus elsewhere,” Porat said. “They have no problem with all manner of sin including a gay pride parade in the main streets of Israel, which is a total abomination to the word of God. Not one rabbi comes out against this, but yet [they] will do all manner of gymnastics to go after Messianic Jews! God forbid they should be allowed live in Israel! There is a huge, unreported spiritual revival in Israel that the rabbis are apoplectic over. They deem the rise of believers in Yeshua as a danger to their futures, just as 2,000 years ago. Nothing changes.”

The role of the Orthodox community is to obstruct and to destroy the Messianic Jews, he lamented.

“It is a demonic spirit that is operating in Israel,” he said. “Jesus said, ‘if they will do this unto me, they will do it unto you.’

“The goal of the the Sanhedrin is to intimidate the Messianic believers into leaving Israel, deny their faith in Yeshua, and to prevent new believers from making Aliyah (moving) to Israel. … they want all believers out of Israel. Just as in the days of Yeshua.”

Porat said Christians of the West have a biblical obligation to Israel and “we must be in constant prayer against this anti-Yeshua spirit. The Messianic believers are depending on the believers around the world to pray and stand with them during this time of persecution by the rabbinic community.”

The upshot of this complex situation is that the court’s ruling is seen as a direct attack by Israel’s ultra-Orthodox religious leaders, who many believe seek to expunge the nation of as many Jews as possible who are now claiming they are believers in Jesus.

“This new law apparently will cause Messianic Jews wishing to be married to jump through mountains of red tape, huge expenses, and years of waiting for many national rights to be restored – if they are ever actually restored,” said Carl Gallups, a former police officer turned Christian pastor in Florida also has a radio show and has interviewed Porat on several occasions.

“This process makes for an interesting and unprecedented prophetic mix: At the same time record numbers of Jews around the world, and especially in Israel, are turning to Yeshua as Messiah there is a direct targeting of those Messianic Jews in an attempt to keep them from acknowledging Jesus Christ as Messiah, and even more significantly – to renounce their new found faith in Yeshua entirely,” said Gallups, the author of several books about biblical prophecy and the end times.

“Jesus warned His disciples, as He was standing in Jerusalem, that in the very last days His disciples would undergo intense persecution for His name’s sake,” he said. “He warned them about their closest friends and, perhaps, even family members turning against them and ‘delivering them up to the authorities.’”

One thing is certain: Tuesday’s rabbinic ruling will not stop Messianic Rabbi Zev Porat from continuing his mission with Messiah of Israel Ministries.

“This only encourages us to further evangelize to the Jews in Israel,” he said. “The rabbis are so upset as so many Jews are coming to faith in Yeshua and the book, ‘The Rabbi Who Found Messiah‘ by pastor Carl Gallups has them in great fear because it is an evangelistic tool being used to draw many a Jew to the written word of God and to salvation in Yeshua. This they fear more than anything else, which is why they must get rid of the believers. … Sound like history repeating itself?”