You Are Here: Home → Vatican Accuses Israel of Risking Monks’ Lives in Fire 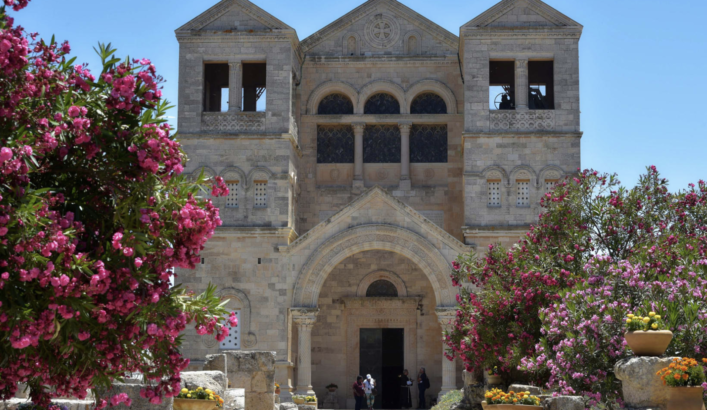 The Church of the Transfiguration on Mount Tabor, August 28, 2017. Credit: Gil Eliahu

The Church of the Transfiguration on Mt. Tabor has asked Israel repeatedly for basic services, including running water, but has been refused. A wildfire Friday caused significant damage due to this “negligence.”

by Nir Hasson, reposted from Ha’aretz

The Vatican’s custodian of holy sites in Israel accused Israeli authorities of risking the lives of monks at a Mount Tabor monastery after a wildfire broke out Friday. The fire raged until early Saturday and required the evacuation of the Franciscan Church of the Transfiguration, which does not have running water.

The fire, which started on Friday evening and was only extinguished on Saturday morning, reignited an ongoing dispute between the Vatican representatives, Custodia Terrae Sanctae, and Israel over connecting the early 20th century church to water and sewage systems. For many years, the church has asked Israel to ensure it has running water, but the authorities demand that the church foot the bill for the infrastructure works, and several rounds of negotiations with officials at the Tourism Ministry and National Infrastructure Ministry have failed to bring results.

In a statement Friday, the Custodia Terrae Sanctae said the fire and ensuing evacuation are “a direct consequence” of Israel’s negligence in providing regular water supply. “Unfortunately, despite its holiness, importance and the vast number of tourists it attracts, the mountain has been for many years in a dire state in terms of basic infrastructure, being effectively cut off from water supply.”

“For years, Christian churches have warned state authorities … asking that running water be supplied to the mountain top, as the law requires,” it added, citing requests relayed to government ministries in 2017, which “have gone unanswered.”

The Custos of the Holy Land Fr. Francesco Patton called on Israeli authorities to “fulfill their commitments by law… Ensuring freedom of religion and access to the holy sites includes the duty the ensure normal supply of the most basic services to those sites and to keep both the monks and visitors safe.”

In the 1950s, the Custodia installed a makeshift water pump and pipe to bring water to the church, but it is insufficient and often fails. The thousands of daily visitors at the church, as well as monks living there, many times have no choice but to use well water.

Jerusalem: The Not-so-eternal Capital of the Jewish People