You Are Here: Home → US court sentences Israeli CEO for scamming Americans 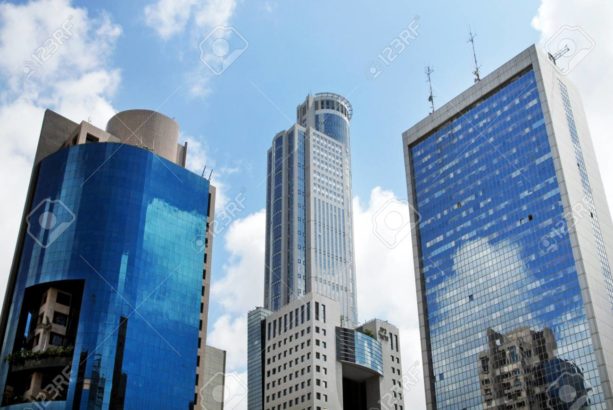 Ramat Gan diamond center in Tel Aviv, where many binary options companies were based.

Israeli media report that an Israeli CEO has been sentenced in a US court for defrauding Americans out of millions of dollars. The company specifically targeted the elderly and the vulnerable, one of over 100 Israeli companies perpetrating a scam called “binary options”… Israel permitted the scam for a decade…

The Times of Israel reports that Lee Elbaz, an Israeli CEO, was sentenced to 22 years in prison by a Maryland court on Thursday. US media have largely failed to report on the conviction, despite the fact that American taxpayers give Israel over $10 million per day. The pro-Israel lobby has long been deeply influential in US Mideast policies.

Elbaz was the CEO of an Israeli company called Yukom Communications Ltd., which perpetrated an international financial scam called “binary options.” More than a hundred binary options companies operated in Israel between the years 2008-2018, scamming people around the world out of hundreds of millions of dollars. For years Israel allowed the scammers to operate unhindered.

TOI reports that the US judge said that Elbaz and others “specifically targeted vulnerable people, including the elderly, and tried to get people addicted to trading like in a casino. He said that Elbaz would suggest that clients use their retirement funds for investments.”

An Israeli lawyer told TOI: “I estimate that hundreds, if not thousands, of Israelis were engaged in pretty much the same conduct for which Elbaz was convicted and sentenced… If Israeli law enforcement authorities had done their job, we wouldn’t have come to this sad day.”

According to TOI: “Binary options fraud flourished in Israel for about a decade before the entire industry was outlawed via Knesset legislation in October 2017, largely as a result of investigative reporting by The Times of Israel that began with a March 2016 article entitled ‘The wolves of Tel Aviv.’ At its height, hundreds of companies in Israel were engaged in the widely fraudulent industry, employing thousands of Israelis, allegedly fleecing billions out of victims worldwide.

“Many of the fraudulent operatives have since moved their operations abroad, or switched to other scams, though Israeli law-enforcement authorities have proved unwilling or unable to prosecute more than a handful of alleged offenders. By contrast, the US government is ratcheting up efforts to bring Israeli offenders to justice.”

A US prosecutor told the court that “videos from inside Yukom showed that employees enjoyed their work, and that Elbaz fostered a work environment where it was fun to defraud investors.”

“There was a mentality at this company that the defendant fostered, with gongs and bells, to say this is exciting, it’s a good thing to defraud investors. That culture that permeated company is no doubt one of the reasons why this fraud grew from a few hundred thousand dollars and a few employees to hundreds of employees and millions and millions of dollars in losses to investors,” he said.

A London-based NGO, the Bureau of Investigative Journalism, takes credit with TOI for first exposing Elbaz: “A whistleblower from inside the industry approached the Bureau and the Times of Israel in 2016 with inside files including lists of thousands of victims from 50 countries and the sums which they had been defrauded of. The information helped the US authorities prosecute Elbaz.”

Elbaz had been living with a relative in San Francisco while she awaited her trial.

TOI reports that at the sentencing the judge read off a long list of victims who had lost their life’s savings:

“Among such victims was Larry Burton, who lost over $200,000 including $70,000 from his retirement account. He also borrowed 30,000 for his investment and afterwards had to refinance his home. There’s James Freeman, age 67, who lost $304,000, his entire life savings. Terry Pocket lost $247,000 including $94,000 from his 401k fund. He also said he lost his life’s savings and had to borrow money to pay for his mortgage. Mr. Hanow lost $175,000 including large sums from his IRA and retirement funds and had to take a job as a truck driver to help pay off his losses.” The judge continued naming victims, including a man who “lost so much money he tried to commit suicide.”

Finance Feeds reported in 2017: “Israel’s binary options industry rose to prominence very very quickly in the middle of the last decade, and has during the past two years become the bete noire of financial markets regulators, mainstream news entities and consumer protection groups, largely because it is about as far removed from a genuine financial product as is humanly imaginable.

“The vast binary options business, which bears absolutely no resemblance to genuine electronic trading whatsoever, is indeed a weighted gambling platform masquerading as a retail trading environment, which the operators, most of whom come from adult entertainment, online poker, lead buying (and stealing in some cases) and affiliate marketing backgrounds rather than financial services, use to pocket the deposits of unsuspecting customers worldwide.

“Binary options is reviled on a global scale, with France, Belgium, Germany, Denmark, the United States, and Holland having outlawed it, and Britain making a clear point never to regulate it as a financial product.”

A Canadian man committed suicide after being conned out of his life savings.

An Israeli attorney who represents victims of the fraud said: “I hope that law enforcement authorities in Israel will study this case closely. To anyone familiar with the forex and binary options industry in Israel, it is clear that the fraudulent tactics presented in the Lee Elbaz case were not unique to Yukom but rather a standard practice among many Israeli companies in this field. Such an ongoing and vast illegality could have been made possible only by a systematic failure of law enforcement.”

The US department of justice has announced: Individuals who believe that they may be a victim in this case should visit the Fraud Section’s Victim Witness website for more information, and may call the Victim Assistance Line toll-free at (888) 549-3945 or email them at at victimassistance.fraud@usdoj.gov.

Alison Weir is executive director of If Americans Knew, president of the Council for the National Interest, and author of the best selling book, “Against Our Better Judgment: The Hidden History of How the U.S. Was Used to Create Israel.”  Her articles have been published by the Washington Report on Middle East Affairs, The Link, Project Censored, Dissident Voice, Antiwar.com, MintPress News, CounterPunch, Z Magazine, and others.

Sign the petition: “No aid to Israel while Israeli scammers bilk Americans”