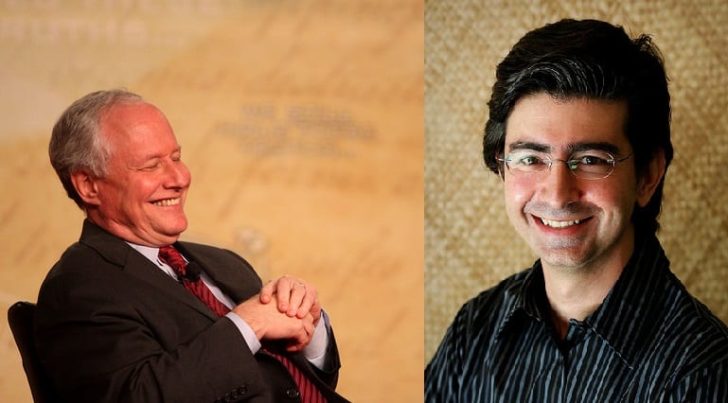 Israelist Neocons have moved back & forth between the left and the right… currently they’re working with progressives, are funded by Pierre Omidyar, featured as “pundits” from Fox News to Rachel Maddow, & are promoting anti-Russian conspiracies

The Roman poet Ovid’s masterful epic The Metamorphoses includes the memorable opening line regarding the poem’s central theme of transformation. He wrote In nova fert animus mutatas dicere formas corpora, which has been translated as “Of shapes transformed to bodies strange, I purpose to entreat…”

Ovid framed his narrative around gods, heroes and quasi-historical events but if he were around today, he would no doubt be fascinated by the many transformations of the group that has defined itself as neoconservative.

The movement began in a cafeteria in City College of New York in the 1930s, where a group of radical Jewish students would meet to discuss politics and developments in Europe. Many of the founders were from the far left, communists of the Trotskyite persuasion, which meant that they believed in permanent global revolution led by a vanguard party. The transformation into conservatives of a neo-persuasion took place when they were reportedly “mugged by reality” into accepting that the standard leftist formulae were not working to transform the world rapidly enough. As liberal hawks, they then hitched their wagon to the power of the United States to bring about transformation by force if necessary and began to infiltrate institutions like the Pentagon to give themselves the tools to achieve their objectives, which included promotion of regime change wars, full spectrum global dominance and unconditional support for Israel.

The neocons initially found a home with Democratic Senator Henry “Scoop” Jackson, but they moved on in the 1970s and 1980s to prosper under Ronald Reagan as well as under Democrat Bill Clinton. Their ability to shape policy peaked under George W. Bush, when they virtually ran the Pentagon and were heavily represented in both the national security apparatus and in the White House. They became adept at selling their mantra of “strong national defense” to whomever was buying, including to President Obama, even while simultaneously complaining about his administration’s “weakness.”

The neoconservatives lined up behind Hillary Clinton in 2016, appalled by Donald Trump’s condemnation of their centerpiece war in Iraq and even more so by his pledge to end the wars in Asia and nation-building projects while also improving relations with the Russians. They worked actively against the Republican candidate both before he was nominated and elected and did everything they could to stop him, including libeling him as a Russian agent.

When Trump was elected, it, therefore, seemed that the reign of the neocons had ended, but chameleonlike, that have changed shape and are now ensconced both in some conservative as well as in an increasing number of progressive circles in Washington and in the media. Against all odds, they have even captured key posts in the White House itself with the naming of John Bolton as National Security Adviser and Mike Pompeo as Secretary of State. Bolton’s Chief of Staff is Fred Fleitz, a leading neocon and Islamophobe while last week Trump added Iran hawk Richard Goldberg to the National Security Council as director for countering Iranian weapons of mass destruction. Goldberg is an alumnus of the Foundation for Defense of Democracies, which is the leading neocon think tank calling incessantly for war with Iran.

Meanwhile, the neocon metamorphosis is nearly complete as many of the neocons, who started out as Democrats, have returned home, where they are being welcomed for their hardline foreign policy viewpoint. Glenn Greenwald reports that, based on polling of party supporters, the Democrats have gone full-Hillary and are now by far more hawkish than the Republicans, unwilling to leave either Syria or Afghanistan.

The neocon survival and rejuvenation is particularly astonishing in that they have been wrong about virtually everything, most notably the catastrophic Iraq War. They have never been held accountable for anything, though one should note that accountability is not a prominent American trait, at least since Vietnam. What is important is that neocon views have been perceived by the media and punditry as being part of the Establishment consensus, which provides them with access to programming all across the political spectrum. That is why neocon standard-bearers like Bill Kristol and Max Boot have been able to move effortlessly from Fox News to MSNBC where they are fêted by the likes of Rachel Maddow. They applauded the Iraq War when the Establishment was firmly behind it and are now trying to destroy Donald Trump’s presidency because America’s elite is behind that effort.

Indeed, the largely successful swing by the neocons from right to left has in some ways become more surreal, as an increasing number of progressive spokesmen and institutions have lined up behind their perpetual warfare banner. The ease with which the transformation took place reveals, interestingly, that the neocons have no real political constituency apart from voters who feel threatened and respond by supporting perpetual war, but they do share many common interests with the so-called liberal interventionists. Neocons see a global crisis for the United States defined in terms of power while the liberals see the struggle as a moral imperative, but the end result is the same: intervention by the United States. This fusion is clearly visible in Washington, where the Clintons’ Center for American Progress (CAP) is now working on position papers with the neoconservative American Enterprise Institute (AEI).

One of the most active groups attacking President Trump is “Republicans for the Rule of Law,” founded by Bill Kristol in January 2018, as a component of Defending Democracy Together (DDT), a 501(c)4 lobbying group that also incorporates projects called The Russia Tweets and Republicans Against Putin. Republicans Against Putin promotes the view that President Trump is not “stand[ing] up to [Vladimir] Putin” and calls for more aggressive investigation of the Russian role in the 2016 election.

DDT is a prime example of how the neoconservatives and traditional liberal interventionists have come together as it is in part funded by Pierre Omidyar, the billionaire co-founder of eBay who has provided DDT with $600,000 in two grants through his Democracy Fund Voice, also a 501(c)4. Omidyar is a political liberal who has given millions of dollars to progressive organizations and individuals since 1999. Indeed, he is regarded as a top funder of liberal causes in the United States and even globally together with Michael Bloomberg and George Soros. His Democracy Fund awarded $9 million in grants in 2015 alone.

The Bulwark, successor to Weekly Standard

Last week, the Omidyar-Kristol connection may have deepened with an announcement regarding the launch of the launch of a new webzine The Bulwark, which would clearly be at least somewhat intended to take the place of the recently deceased Weekly Standard. It is promoting itself as the center of the “Never Trump Resistance” and it is being assumed that at least some of the Omidyar money is behind it.

Iranian-born Omidyar’s relationship with Kristol is clearly based on the hatred that the two share regarding Donald Trump. Omidyar has stated that Trump is a “dangerous authoritarian demagogue…endorsing Donald Trump immediately disqualifies you from any position of public trust.” He has tweeted that Trump suffers from “failing mental capacity” and is both “corrupt and incapacitated.”

Omidyar is what he is – a hardcore social justice warrior who supports traditional big government and globalist liberal causes, most of which are antithetical to genuine conservatives. But what is interesting about the relationship with Kristol is that it also reveals what the neoconservatives are all about. Kristol and company have never been actual conservatives on social issues, a topic that they studiously avoid, and their foreign policy is based on two principles: creating a state of perpetual war based on fearmongering about foreign enemies while also providing unlimited support for Israel. Kristol hates Trump because he threatens the war agenda while Omidyar despises the president for traditional progressive reasons. That hatred is the tie that binds and it is why Bill Kristol, a man possessing no character and values whatsoever, is willing to take Pierre Omidyar’s money while Pierre is quite happy to provide it to destroy a common enemy, the President of the United States of America.

Philip M. Giraldi is a former CIA counter-terrorism specialist and military intelligence officer who served nineteen years overseas in Turkey, Italy, Germany, and Spain. He was the CIA Chief of Base for the Barcelona Olympics in 1992 and was one of the first Americans to enter Afghanistan in December 2001. Phil is Executive Director of the Council for the National Interest, a Washington-based group that seeks to encourage and promote a U.S. foreign policy in the Middle East that is consistent with American values and interests.

THE INTERCEPT: MSNBC’S RACHEL MADDOW SEES A “RUSSIA CONNECTION” LURKING AROUND EVERY CORNER