You Are Here: Home → The Nation: Dem Insiders try to block party from supporting Palestinian rights 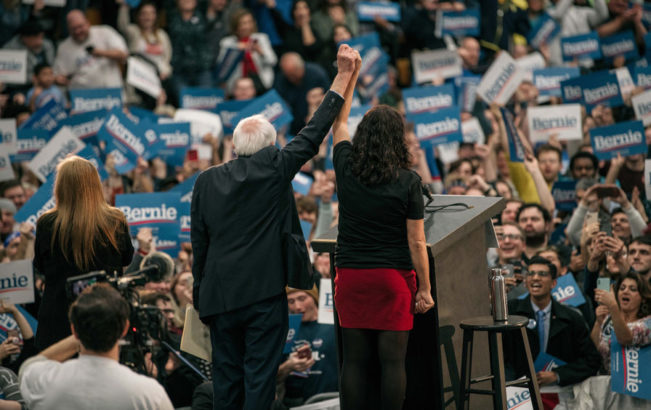 Representative Rashida Tlaib and Senator and presidential candidate Bernie Sanders hold hands on stage during a rally on October 27 in Detroit, Michigan.

The Nation has just published: “These Democratic Insiders Want to Keep the Party From Moving Left on Israel-Palestine, in which it states: “the Democratic Majority for Israel is on a mission to make sure the party remains a reliable backer of the US-Israel alliance.”

The Nation article reports: “As high-profile endorsements rolled in for Bernie Sanders after his debate performance on October 15, one group of Democrats bristled. Democratic Majority for Israel (DMFI), a lobby group filled with Washington insiders, struck back at the outsider who’s been rattling the Democratic establishment with his popular progressive agenda…” Read more

For an earlier report on the Democratic Majority for Israel, read Alison Weir’s “Democratic bigwigs create group to promote Israel to progressives.”