You Are Here: Home → State Department to spend $2 million against “anti-Semitism” abroad 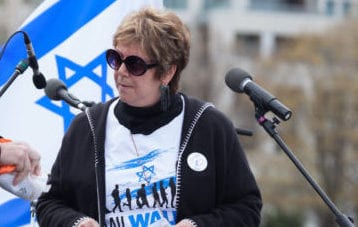 Hannah Rosenthal at Walk for Israel day in 2016. When Rosenthal was Anti-Semitism Envoy at the State Department, she adopted a new, Israel-centric definition of anti-Semitism that had been formulated by an Israeli minister.

The projects will be funded through two State Department offices: the Bureau of Democracy, Human Rights and Labor and the Special Envoy to Monitor and Combat Anti-Semitism. The anti-Semitism envoy position was created through 2004 legislation over the objection of the State Department. All four such envoys have been Israel partisans.

The objective of the new projects, according to the announcement of the program, is to address anti-Semitism abroad that is manifested in several ways, including “the use of hateful or inflammatory speech in public discourse, traditional media and online.” The announcement does not specify what language will be considered “hateful or inflammatory speech.” (In the U.S., the First Amendment prohibits the censorship of free speech.)

Special Anti-Semitism Envoy Hannah Rosenthal adopted the new Israel-centric definition of anti-Semitism in 2009. The formulation had been created by Israeli minister Natan Sharansky.

The new  projects will “include training law enforcement to adequately and holistically respond to hate crimes from a legal, social, and community perspective; and to better equip police and prosecutors to engage effectively with local Jewish populations.”

The grants will be available to both nonprofit organizations and for-profit, commercial businesses. Organizations winning the grants may be allowed to keep aspects of their identity secret.

The current Anti-Semitism Envoy is Elan Carr, who ran for Congress in 2014 with the promise that he would be “a reliable vote for Israel.” Carr, who was backed by billionaire casino magnate Sheldon Adelson, said he visits Israel every year.