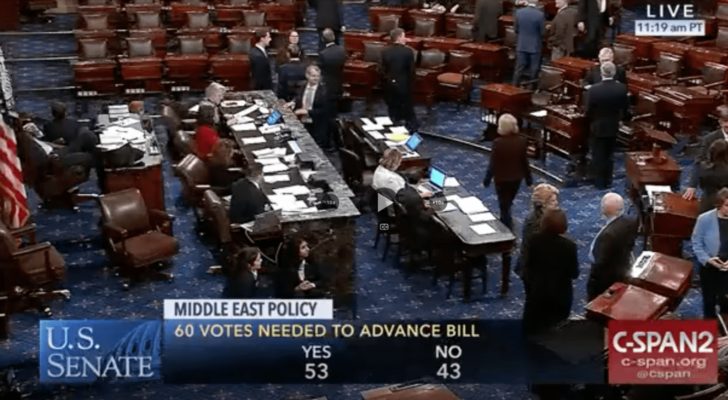 Senate Republicans again failed to obtain the 60 votes necessary to move the bill to a quick vote, as Democratic leaders complained of what they say is Republican intransigence in ending the government shutdown. Rubio says the bill was crafted to help Israel, says he opposes Trump troop withdrawal from Syria because it would hurt Israel

Senate Republicans again failed to obtain the 60 votes necessary to move Senate bill S.1 to a quick vote, as Democratic leaders complained of what they say is Republican intransigence in ending the government shutdown.

The Thursday vote was 53-43, with fewer Senators voting than the previous tally of 56-44.

The bill, entitled the “Strengthening America’s Security in the Middle East Act of 2019,” consists of four components focused on Israeli needs. Among other things it would cement a $38 billion aid package to Israel, the largest military aid package in U.S. history, and would work to “combat BDS” – the international campaign of boycott, divestment and sanctions to pressure Israel to end its violations of international law and human rights.

The bill also provides money to Jordan, considered an Israel ally, and takes action against Syria. During the debate, the bill’s main sponsor, Marco Rubio, said that he opposes President Trump’s efforts to withdraw U.S. troops from Israel because he claimed “the U.S. withdrawal from Syria will have a dramatic impact on the security of Israel.”

Rubio said the sponsors created the bill to help Israel: “We went through and we said let’s find some bill that would help our allies in the region — Israel, Jordan.” Rubio receives major backing from pro-Israel billionaires such as Sheldon Adelson and Paul Singer.

The Senate Democrats said they opposed taking up the bill while the government is shut down, many describing the hardship of federal workers not receiving their pay.

Some of the Democrats who voted against cloture, for example Minority Leader Chuck Schumer (NY)  and Ben Cardin (MD), are among the Senate’s most fervent advocates for Israel.

While the Republican Jewish Coalition supported the vote, the  Jewish Democratic Council of America opposed it, issuing a statement saying:

“Senate Republicans have abdicated their responsibility to the American people by forcing a second vote on S.1, a bill that has nothing to do with reopening the government. After consideration of this bill was blocked on Tuesday, Senate Republicans’ decision to hold a second vote on the same bill is a clear effort to defer reopening the government and politicize U.S. support for Israel.”

“Senate Democrats support aid to Israel and unanimously oppose the Boycott, Sanctions, and Divestment (BDS) movement—these two issues are not in question,” she continued. “The government shutdown imposes grave and growing social, economic and security risks on the American people. JDCA stands behind Senate Democrats’ insistence that the Senate prioritize opening the government, and demands that Senate Republicans stop politicizing historically bipartisan support for Israel.”

Numerous voters contacted the Senators urging them to vote no on the bill because of Israel’s violent actions against Palestinians. Most Americans feel the U.S. already gives Israel too much money.

Voice your opinion on S.1.