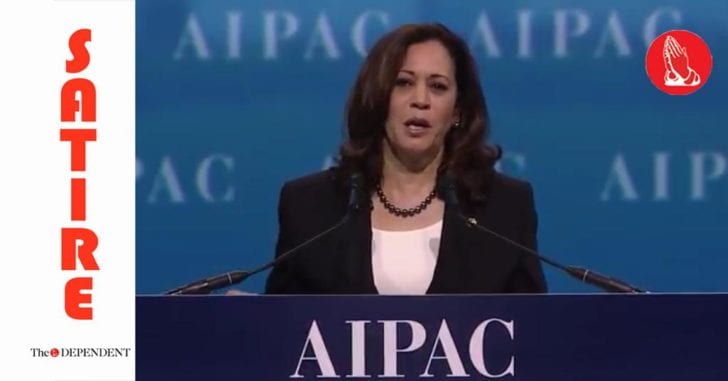 Image from The Dependent

Pakistan Today, an English language newspaper headquartered in Lahore, features the following satirical commentary in its section The Dependent:

Former US Senator Kamala Harris, who was promoted to the American Israel Public Affairs Committee’s (AIPAC) Deputy National Coordinator two days ago, is going to hold the office of Vice President of the US in an ex-officio capacity.

“Yes, as is the norm, Senator Harris will also be holding down the office of VP,” said AIPAC CEO Howard Kohr. “This side office is often overlooked because the bulk of a DNC’s responsibilities are AIPAC-related and the US VP slot is only for the occasional tie-breaker vote in the US Senate.”

“It’s usually a surprise. Here at AIPAC, it is a tradition to let the interns have a lottery where the winner gets to tell incoming Dy National Coordinators that they also get the VP slot. Seeing that look on their faces is priceless.”

“It’s a pleasant surprise, always. It means an extra paycheck, some extra security detail, if one is into that sort of a thing,” he said. “I think their credit score also goes higher.”

“Not bad for not much extra work, eh? Just signing some documents here and there and the ceremonial ribbon-cutting ceremonies in Tel Aviv and of course, the ceremonial inaugural Village Flattening Ceremony in the West Bank.”

“No, she doesn’t do it herself,” he said, laughing. “She just presses a button. It’s symbolic. Our guys do the rest.

The above piece is a work of satire and does not present itself as the truth.