You Are Here: Home → Report: 7,000 Palestinians held in Israeli jails 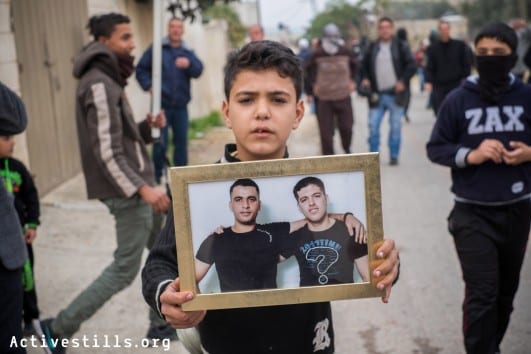 Journalists, scientists, human rights activists and even a clown are among the Palestinians currently in Israeli jails. Since the Israeli  occupation began in 1967, Israel has jailed between half a million and 800,000 Palestinians.  The conviction rate is about 99 percent.

Among the arrestees are also those in administrative detention, an Israeli speciality: over the previous year, 1,742 orders for detention without trial were served against Palestinians. As of the end of 2016, Israel was holding around 700 Palestinian administrative detainees, according to the report — around 10 percent of the total number of Palestinian prisoners. What was supposed to be a tool used exceptionally in “ticking bomb” scenarios has become almost routine.

It’s important to note that there are people who have been sitting in jail under administrative detention for months, or even years, without knowing what they’re suspected of or being given the opportunity to defend themselves. They have been imprisoned after members of Israel’s security apparatus managed to persuade the court that they have evidence, that nonetheless remains confidential. And the courts are easily persuaded. Each time, someone can be sent to jail for up to six months under administrative detention — but there’s no limit to the number of times the detention order can be extended, without the need to go to trial.

Of the 22 Palestinian journalists currently in detention, nine are under administrative detention. They include Omar Nazzal, a member of the Palestinian Journalists’ Guild, who was arrested at the Allenby Crossing at the end of April last year. He had been on his way to a meeting of the European Federation of Journalists in Sarajevo. A few days after Nazzal’s arrest, the military prosecutor realized there wasn’t enough evidence to put him on trial, and he was instead sent to administrative detention on the basis of confidential information. In an interview with The Seventh Eye, Nazzal’s lawyer claimed that he had been arrested because of his journalism. He also voiced his suspicion that the Israelis and the Palestinians were coordinating his detention, due to his writing “causing a headache” for both sides.