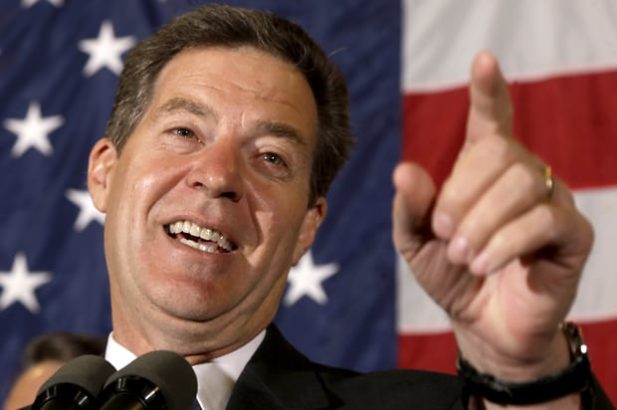 Sam Brownback, soon to be the face of religious freedom worldwide?

by Kathryn Shihadah, If Americans Knew

PART ONE OF TWO PARTS

President Donald Trump recently tapped Kansas Governor Sam Brownback for the position of Ambassador-at-Large for International Religious Freedom, under the umbrella of the State Department. The position itself grew out of a bill that Brownback co-sponsored in 1998, the International Religious Freedom Act. The bill was supported by dozens of religious institutions that sought to make religious liberty an official foreign policy of the United States. It passed easily and was signed into law by President Bill Clinton on October 27, 1998.

Why this position exists at all, as it replicates the work of the UN Human Rights Council and its Special Rapporteur on freedom of religion or belief, is puzzling—but the question of the moment is, “whose interests will be served by soon-to-be Ambassador Brownback?”

Significantly, Brownback is the first politician to be appointed to the job—previously the position has always been filled by religious or nonprofit leaders. The first Ambassador, Robert Seiple (1999-2001), is a former military officer, university administrator, and a past president of global humanitarian organization World Vision. The second, John Hanford, (2002-2009) is a pastor who worked on international religious freedom issues and was instrumental in the creation and passage of the International Religious Freedom Act (IRFA). Suzan Johnson Cook  (2011-2013), the third Ambassador, is a pastor, theologian, author, activist, and academic who served as a policy advisor to President Clinton. The most recent Ambassador was David Saperstein (2014-2017), a rabbi, lawyer, and Jewish community leader.

While the great state of Kansas may be happy to lose their governor (“He leaves behind a legacy of failed leadership,” “he has left a state in carnage and destruction”), it remains to be seen whether Brownback will have a fair and balanced agenda as he seeks to rid the world of religious intolerance and persecution. Partisanship may be an issue: he has been one of the most loyal, outspoken supporters of Israel throughout his political career, as reported by JTA, the Jewish Telegraph Agency.

Brownback, a staunch conservative, has had a close relationship with the gamut of Jewish communal organizations. While in the Senate, he chaired the U.S. Helsinki Commission [on human rights abuses] and was outspoken in identifying anti-Semitism overseas. He was one of the leading pro-Israel voices in the Senate…He made support for Israel a central plank of his short run for president in the 2008 race.

A key issue for Brownback has been Israel, about which he holds views closely in line with Christian Zionism…Brownback has served on the presidium of the Jerusalem Summit, a now largely defunct Israel-based advocacy outfit that brought together evangelicals, neoconservatives, and hardline pro-Israel figures from across the globe in an effort to shape the debate over the status of Palestine, radical Islam, and other hot-button Mideast issues.

Brownback has shown little respect for Palestinians or hope for a future Palestinian state.

As a politician, Brownback has courted pro-Israel organizations and been courted by them. As Ambassador-at-Large for International Religious Freedom, would he snub these longtime associates and move on to bigger and better things—namely the rest of the world? If they were merely business acquaintances, he could leave them behind. But Sam Brownback is deeply invested in Israel. To name a few, he has worked closely with members of the Iron Dome Alliance, the Anti-Defamation League, the Israeli Knesset, the Israeli Initiative, the author of Universal Zionism, the organizer of the Congressional Israel Victory Caucus, and the incomparable John Hagee. (Details upcoming in Part Two of this report.)

Israel has a genuine problem of religious intolerance within the Jewish community (e.g. orthodox vs. reform–read this and this). But even more, Christians (read this and this) and Muslims (read this) face ongoing persecution from the “Jewish State.”  (Of course this designation–“Jewish State”–is in itself problematic, as 20% of Israelis are non-Jewish.) Anyone working in the service of religious tolerance would have his work cut out for him in this tiny country.

It might seem that because of Israel’s issues, a staunch supporter of Israel like Sam Brownback would have reservations about serving as Ambassador for Religious Freedom. Or maybe not.

Mulitple groups have recently alleged that the US Commission on International Religious Freedom (USCIRF) – which Brownback helped create – has been whitewashing the religious discrimination issue in Israel.

Let’s go over that again: the organization created to uphold religious freedom around the world has been withholding information about Israel’s assault on religious freedom. (This is being reported by both Arab and Jewish sources, lest anyone cry “antisemitism.”)

According to James Zogby, an Obama appointee to USCIRF, commissioners in the organization have, since its inception, refused to even investigate conditions for religious minorities in Israel. Given the huge task of policing religious freedom around the world, this may be excused an oversight, except that three different organizations have contacted USCIRF with official complaints about religious discrimination in Israel, and pleas to come and address the situation. (And, again, the groups are both Jewish and non-Jewish. No antisemitism.)

Zogby reported that USCIRF received a letter, signed by no less than “11 major US religious communities and 34 Christian groups from Jerusalem, the West Bank, and Gaza,” calling attention to a “conspicuous gap” in reporting on Israel, going back to 1998, when USCIRF was created. With the letter came an exhaustive 192-page report from US-based nonprofit Palestine Works–which cited “deeply disturbing discriminatory laws that impact the freedom to marry, family unification, discrimination in housing and land-ownership, the freedom of movement, and the right to worship at and to maintain holy sites.” The letter urged USCIRF to conduct “a comprehensive review of religious freedom in Israel and the occupied Palestinian territories, consistent with the principles it has established with respect to other states.”

Zogby described the reaction of the commissioners: “The level of vehemence that greeted the receipt of these letters was so great that some commissioners expressed concern that if we were to adopt these requests … it would consume the commission in endless rancorous debate, paralyzing us for the rest of the year. We were, in effect, bullied into silence.”

Zogby insists that USCIRF is doing a disservice to Christian and Muslim Palestinians, as well as encouraging Israel to violate human rights: “I believe we have an obligation to consider Israel’s use of religion to discriminate against both its own citizens and Palestinians living in the occupied territories, as well as its violations of a range of freedoms of Christians, Muslims, and non-Orthodox Jews.”

Previously, in 2014, well-known American bishop Drew Christiansen and local Jerusalem bishop Fouad Twal spoke to the USCIRF commission about religious discrimination concerns they had. According to Christiansen, they were met with open hostility. “The reception I’d say was antagonistic, defensive of Israel and not at all interested in hearing out […] or even volunteering remedies for these problems.” He added that the commission included an alliance of “Jewish hard-liners and evangelical Christians [that] has long stymied any investigation or criticism of Israel.” 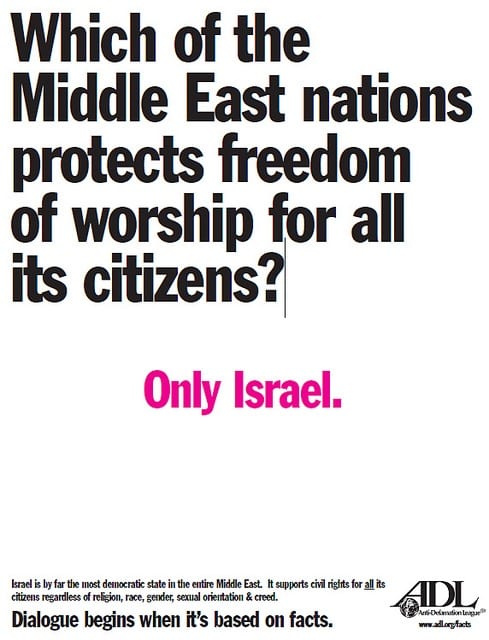 IRF submits an annual Report on International Religious Freedom to Congress; so does USCIRF. IRF (State Department) “documents religious freedom violations in every country in the world.” But somewhere between this report and USCIRF’s report, Israel disappears–in spite of the State Department’s 9,000-word chronicle of its offenses. Compare this to 6,000 words for “Country of Particular Concern” (CPC) Saudi Arabia, and 5,000 words for “Tier 2” (watch list) country Afghanistan.

To be fair, USCIRF is not required to report on every country, as the State Department is. USCIRF is tasked with recommending to the President which countries to consider taking action against. Possible Presidential actions are spelled out by law, and essentially consist of boycott, divest, and sanction.

Perhaps, just perhaps, that is why USCIRF chose not to include Israel in its report? In spite of the legitimacy of the BDS movement, it has been demonized by pro-Israel individuals and organizations round the world as “antisemitic” and “an existential threat to the State of Israel.” No wonder USCIRF commissioners duck and cover when accusations appear of wrongdoing in that country.

(And perhaps James Zogby’s accusations in late April motivated President Trump scramble and start his search for an Ambassador with the right credentials–read “bias”–to clean up the mess.)

Israel’s overarching system of apartheid, which separates Jews out for preferential treatment, is not acknowledged. Israel’s very self-designation as a Jewish State, in spite of the presence of 1.8 million non-Jews, is religious discrimination, but this is overlooked. Whether the silence is because of pressure from pro-Israel actors, as was the case in the removal of the report to the UN (no longer available on the website, but accessible here), or self-censorship in deference to “America’s closest ally,” it is conspicuously absent.

This is the environment into which Sam Brownback is about to step: a stalwart Israel supporter into a pro-Israel climate, in which religious liberties are supposed to be defended and upheld–but are routinely sidestepped. Americans need to decide for themselves whether he will take his responsibility wherever it leads, or whether he will, like his predecessors, play fast and loose with some people’s freedom to worship as they choose.

How deep Brownback’s pro-Israel roots go is a whole conversation of its own. Stay tuned.

Kathryn Shihadah is a staff writer for If Americans Knew. This is the first in a two-part series.