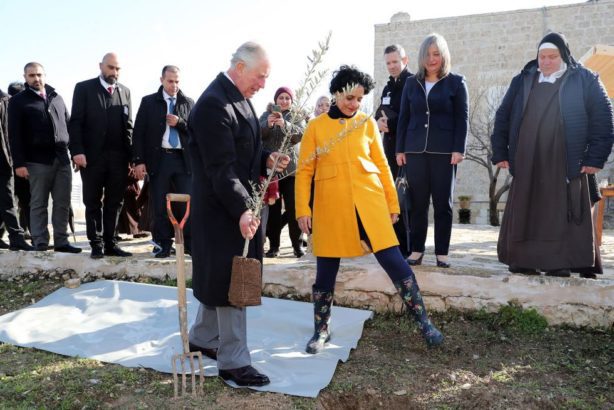 The late Queen Elizabeth was reportedly horrified by Israel’s occupation of Palestine, and refused invitations to visit Israel…

In 2020 Prince Charles, on a trip to the occupied West Bank, decried the  ‘suffering’  and  ‘hardship’ endured by the Palestinian population under Israeli occupation…

During his speech in Bethlehem, Charles said: ‘It is my dearest wish that the future will bring freedom, justice and equality to all Palestinians…

He said: “I believe that the Israel-Palestine conflict is the fundamental reason for the hostility and all the ‘pent-up poison’ throughout the Islamic world…”

by Raouf Halaby, reposted from Counterpunch, September 16, 2022. [Some photos and Addendum added by IAK]

Since Britain’s monarch, Queen Elizabeth II,  passed away, there has been extensive wall-to-wall coverage on every major and minor network. The print media and the tabloids have had a field day printing commentaries and ad infinitum glossy photographs. The commentary has covered every transformative event of Queen Elizabeth II’s life, from birth to death.

Extensive reporting on every aspect of her early life included the following: her childhood days;  her stoic and courageous demeanor during the WWII years; her ascension to the throne; her trips to all the British dominions; the numerous familial tragedies and indiscretions that plagued her family; her steadfast resolve in the face of adversity; her love for her subjects;  the imperative of performing mundane and weighty state and royal obligations with august dignity and distinction; and her unwavering faith in God.

Sometime in early 1954 (I was 9 years old at the time) the entire Halaby family attended a special viewing of a black and white documentary film about Queen Elizabeth’s coronation. The setting was the famous Jerusalem, Palestine, YMCA structure, a landmark Jerusalem edifice whose suggestive phallic architectural design is a metaphor for the British Empire’s once-upon-a-time dominion over all the seas and over 65 per cent of the world’s land mass.

Unique in its design, the Jerusalem YMCA was conceived by its benefactor as a center of cultural, athletic, social, and intellectual life in Jerusalem, Palestine. It was built in April 1933 during Britain’s Mandate years in Palestine,  and its aim was to foster “harmony and building the spirit, mind, and body.”

With an imposing 152 ft. tower and two lateral twin-domed structures, after 1948 the YMCA was a haven for the few remaining Palestinian families living under Israeli occupation in West Jerusalem. For short, we called it the Y. The vaulted roof to the left of the majestic tower housed the gymnasium and swimming pool, the same swimming pool where my siblings and I learned how to swim.

Progressing from Guppy to Shark status was one of my childhood accomplishments. Learning how to speak Hebrew, French, and English and surviving Israeli harassment, hatred, oppression, and dispossession  were other accomplishments. To the right, the vaulted roof sat atop an imposing auditorium and conference rooms. The lateral domes connected to the tower with expansive cloistered passages.

Dressed in their Sunday best, the attendant crowd for the viewing of this post WWII epoch of horror applauded several times. Hosted by the YMCA and the British delegation to Jerusalem, a formal reception was held in the large formal cloistered space. This was my first experience of being a participant, albeit in a virtual manner, in an historic event whose legacy spanned unparalleled 70 years.

After the Queen’s death, the American media outdid itself in its reportage on each decade of Queen Elizabeth II’s reign. We were told that she met 13 US presidents, that she worked with 15 British Prime Ministers, that she travelled to over 120 countries, that she promoted and sponsored cultural expressions, including her love, appreciation, and support for all the arts.

And the plethora of elegant hats, dresses, and purses in myriad colors and styles were the subject of commentary attesting to her good taste and regal deportment. In short, Queen Elizabeth II’s sophisticated attendance and classy demeanor  gave this great-grandmother a polished iconic image that exhibited poise, elegance, composure, tranquility, and assurance (perhaps) never witnessed in a world leader in the last 120 years.

Contrast the late Queen with boorish Boris Johnson, Trump, and their ilk.

Further, her love of horses and corgis; her long walks in the highlands of Scotland; her passionate love of nature; her long retreats to Balmoral Castle (her favorite getaway from the hustle and bustle of urban Windsor Castle); her meticulous attention to green spaces; her keen awareness and expertise in the design of manicured gardens; her passion for pristine landscapes and their importance in promoting serenity, harmony, and the protection of the natural world (a passion inherited by her son, King Charles III) – down to the very last detail.

She seemed to have had a well-honed faculty attuned to horticultural practices. She brought that same sharp-edged knowledge and meticulous attention and experience in running the affairs of state.

Years back when I led a group of undergraduates to Italy, France, and England to study art in some of the world’s finest museums, in their final reports my students wrote that seeing Queen Elizabeth in her Rolls Royce (seated in the back seat and waving as she was leaving Windsor Castle) and seeing the Queen Mother emerge from Harrod’s and taking a brief pause to greet passersby, were the two most memorable events of their 21 day sojourn abroad.

While most of the reportage has dealt with her Majesty’s life and King Charles III’s tribute to his “Dear Mama,”  the restoration of filial and fraternal love between the King and his two estranged sons, William and Harry, and their spouses, is now receiving more attention by the media and pundits.

Sometimes death has its own mystifying powers to heal and bring about redemption, forgiveness, and reconciliation.

Absent from all the reporting on the late queen and the new king are their views on Israel’s treatment of Palestinians, and especially the Queen’s unofficial boycott (she’d crisscrossed the globe to visit over 120 countries) and refusal  to accept an invitation to visit Israel. After a first-hand experience with Israeli apartheid, Prince Charles openly expressed his dim views on the brutal Israeli occupation and its effects on the lives of Palestinians.

If Americans Knew and Al Jazeera are two exceptions.

On September 10, 2022, Alison Weir’s If Americans Knew online blog ran the following article under the title “Over 120 Countries, but Never Israel: Queen Elizabeth’s Unofficial Boycott.” A must read, the report states that on a 1984 visit to Jordan, the Queen, standing on the Jordanian side of the mountainous border overlooking the Jordan River and its  low-lying West Bank, “her Highness was disturbed when Israeli jets passed overhead as she looked at the West Bank from across the river. ‘How frightening,’ she muttered, then, King Hussein’s wife, Queen Nour, replied:  ‘It’s terrible.’  Later on, upon being shown a map of the West Bank, with settlements marked on it, she said: ‘What a depressing map.’“

I am inclined to believe that the Israeli jet fighters’ flight was a stick-it-in-your-eye for her Majesty’s refusal to visit Israel, this, after a British official acknowledged that her Majesty’s boycott will end “When a sustainable peace will be achieved.”

Incensed, former Haaretz editor in chief David Landau penned a convoluted and caustic piece accusing the British Monarch  of being “vengeful” for her father’s clamping down on Jewish terrorism during Mandate times, a time when Irgun terrorism was rampant. To wit the bombing of Jerusalem’s King David Hotel that toppled the  entire six-story left wing, killing 91 people, including 41 Palestinians, 28 Brits, 19 Jews, Armenians, Syrians, and an Egyptian.

Is there another member state of the UN which the British royal family treats with such consistent and studied contempt. The sad but inescapable conclusion, therefore, is that she herself is part of this nasty, petty British intrigue to deny Israel that ranking vestige of legitimation that is in their power to bestow or withhold a royal visit.” He called on the Queen “to bin these sour-smelling inhibitions and end this boycott.

Ironic, isn’t it, that the King David Hotel stood/stands directly across from Jerusalem’s iconic YMCA.

Also ironic is the fact that Menahem Begin, terrorist par excellence, was the mastermind who would later become Israel’s prime minister and the recipient of the Nobel Prize for Peace. That’s like giving Klaus Barbie, the Butcher of Lyon, the Humanitarian of the Year Award.

On September 9, 2020 Al Jazeera reported that

On his first official trip to the occupied West Bank [in January 2020 Prince], Charles expressed his heartbreak over witnessing the  ‘suffering’  and  ‘hardship’ endured by the Palestinian population under Israeli occupation.  … During his speech from Bethlehem, Charles said: ‘It is my dearest wish that the future will bring freedom, justice and equality to all Palestinians, enabling you to thrive and to prosper.

And Sky News TV stated that “the speech constituted  the biggest show of support that a member of the Royal family ever has [expressed] for the Palestinians.” Further,  quoting Prince Charles, royal reporter Robert Jobson stated that the Prince’s words ring true:  said, the prince, “I believe that the Israel-Palestine conflict is the fundamental reason for the hostility and all the ‘pent-up poison’ throughout the Islamic world.”

Like mother like son, Queen Elizabeth II and King Charles III observed firsthand the unvarnished truth about Israel’s brutal occupation, and they refused to remain silent. Their royal affiliation gave them the political cordon sanitaire from the vengeful and hateful diatribes of Israel’s acolytes.

On other hand, Jeremy Corby, former Labour Party leader’s truthful criticism of Israel’s brutal policies cost him his job. For daring to stand up to Israel and her powerful and well-heeled minions, Corbyn was pilloried by his own opportunistic Labour Party members (led by Keir Starmer)  who joined the chorus to accuse Corbyn of being an anti-Semite.

Unfortunately, because Britain is a constitutional monarchy, Queen Elizabeth II and King Charles III are constitutionally prevented from overtly commenting and effecting policy changes on Britain’s skewed Israel/Palestine question.  That decision is solely in the hands of political hacks whose personal integrity is bought and sold in London’s exchange markets and corporate board rooms, a policy that is no different from Britain’s counterpart, the US’s Joe Biden and I am a Zionist to the bone policies.

Town & Country reported in January 2020 that while “members of the British royal family are tasked with remaining apolitical,” Charles pushed the envelope on his first official to Israel-Palestine in January 2020. He traveled to the occupied West Bank and stated:

“No-one arriving in Bethlehem today could miss the signs of continued hardship and the situation you face, and I can only join you, and all communities, in your prayers for a just and lasting peace,” he said.

“We must pursue this cause with faith and determination, striving to heal the wounds which have caused such pain.”

During his time in Bethlehem, Prince Charles visited both the Mosque of Omar, and the Church of the Nativity, which was built on the site where Jesus is said to have been born.

Per the BBC, he said that Bethlehem “embodied the ‘vital co-existence between Christians and Muslims.'”

Earlier in his trip, Charles had visited the Mosque of Omar inside East Jerusalem’s Old City.

The Guardian reports that Prince Charles “began his historic first visit to the West Bank with a gesture of unity, walking through Bethlehem with Muslim and Christian leaders.” In the West Bank he met with numerous refugees and heard their stories first hand.

Raouf J. Halaby is a Professor Emeritus of English and Art. He is a writer, photographer, sculptor, an avid gardener, and a peace activist. halabys7181@outlook.com

FURTHER READING ON GREAT BRITAIN AND THE ISRAEL/PALESTINE ISSUE: