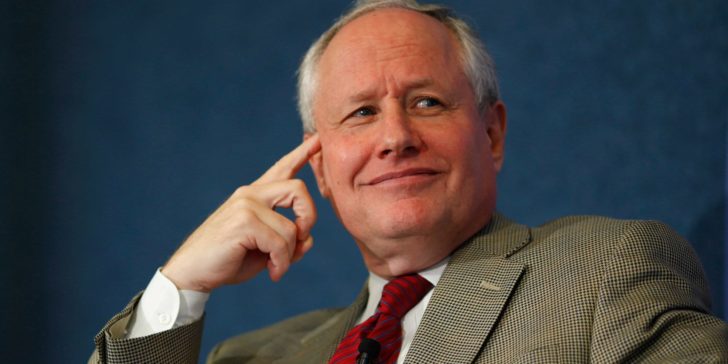 William “Bill” Kristol, founder of the neocon Weekly Standard, has long pushed for militant U.S. policies on behalf of Israel.

I spoke recently at a conference on America’s war party where afterwards an elderly gentleman came up to me and asked, “Why doesn’t anyone ever speak honestly about the six-hundred-pound gorilla in the room? Nobody has mentioned Israel in this conference and we all know it’s American Jews with all their money and power who are supporting every war in the Middle East for Netanyahu? Shouldn’t we start calling them out and not letting them get away with it?”* [See Editor’s note below.]

It was a question combined with a comment that I have heard many times before and my answer is always the same: any organization that aspires to be heard on foreign policy knows that to touch the live wire of Israel and American Jews guarantees a quick trip to obscurity. Jewish groups and deep pocket individual donors not only control the politicians, they own and run the media and entertainment industries, meaning that no one will hear about or from the offending party ever again. They are particularly sensitive on the issue of so-called “dual loyalty,” particularly as the expression itself is a bit of a sham since it is pretty clear that some of them only have real loyalty to Israel.

Most recently, some pundits, including myself, have been warning of an impending war with Iran. To be sure, the urging to strike Iran comes from many quarters, to include generals in the Administration who always think first in terms of settling problems through force, from a Saudi government obsessed with fear over Iranian hegemony, and, of course, from Israel itself. But what makes the war engine run is provided by American Jews who have taken upon themselves the onerous task of starting a war with a country that does not conceivably threaten the United States. They have been very successful at faking the Iranian threat, so much so that nearly all Republican and most Democratic congressmen as well as much of the media seem to be convinced that Iran needs to be dealt with firmly, most definitely by using the U.S. military, and the sooner the better. 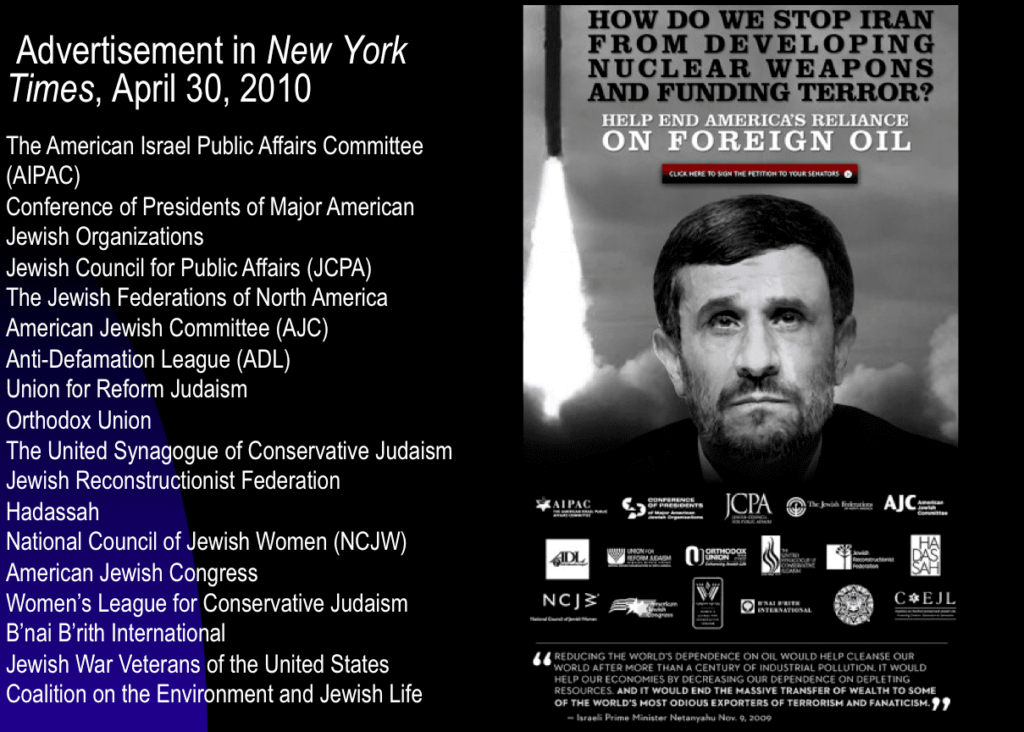 And while they are doing it, the issue that nearly all the Iran haters are Jewish has somehow fallen out of sight, as if it does not matter. But it should matter. A recent article in the New Yorker on stopping the impending war with Iran strangely suggests that the current generation “Iran hawks” might be a force of moderation regarding policy options given the lessons learned from Iraq. The article cites as hardliners on Iran David Frum, Max Boot, Bill Kristol and Bret Stephens.

Daniel Larison over at The American Conservative has a good review of the New Yorker piece entitled “Yes, Iran Hawks Want Conflict with Iran,” which identifies the four above cited hawks by name before describing them as “…a Who’s Who of consistently lousy foreign policy thinking. If they have been right about any major foreign policy issue in the last twenty years, it would be news to the entire world. Every single one of them hates the nuclear deal with Iran with a passion, and they have argued in favor of military action against Iran at one point or another. There is zero evidence that any of them would oppose attacking Iran.”

And I would add a few more names, Mark Dubowitz, Michael Ledeen and Reuel Marc Gerecht of the Foundation for Defense of Democracies; Daniel Pipes of the Middle East Forum; John Podhoretz of Commentary magazine; Elliot Abrams of the Council on Foreign Relations; Meyrav Wurmser of the Middle East Media Research Institute; Kimberly Kagan of the Institute for the Study of War; and Frederick Kagan, Danielle Pletka and David Wurmser of the American Enterprise Institute. And you can also throw into the hopper entire organizations like The American Israel Public Affairs Committee (AIPAC), the Washington Institute for Near East Policy (WINEP) and the Hudson Institute. And yep, they’re all Jewish, plus most of them would self-describe as neo-conservatives. And I might add that only one of the named individuals has ever served in any branch of the American military – David Wurmser was once in the Navy reserve. These individuals largely constitute a cabal of sanctimonious chairborne warriors who prefer to do the heavy thinking while they let others do the fighting and dying.

So it is safe to say that much of the agitation to do something about Iran comes from Israel and from American Jews* [See editor’s note]. Indeed, I would opine that most of the fury from Congress re Iran comes from the same source, with AIPAC showering our Solons on the Potomac with “fact sheets” explaining how Iran is worthy of annihilation because it has pledged to “destroy Israel,” which is both a lie and an impossibility as Tehran does not have the resources to carry out such a task. The AIPAC lies are then picked up and replayed by an obliging media, where nearly every “expert” who speaks about the Middle East on television and radio or who is interviewed for newspaper stories is Jewish.

One might also add that neocons as a group were founded by Jews and are largely Jewish** [See editor’s note], hence their universal attachment to the state of Israel. They first rose into prominence when they obtained a number of national security positions during the Reagan Administration and their ascendancy was completed when they staffed senior positions in the Pentagon and White House under George W. Bush. Recall for a moment Paul Wolfowitz, Doug Feith, and Scooter Libby. Yes, all Jewish and all conduits for the false information that led to a war that has spread and effectively destroyed much of the Middle East. Except for Israel, of course. Philip Zelikow, also Jewish, in a moment of candor, admitted that the Iraq War, in his opinion, was fought for Israel.

Add to the folly a Jewish U.S. Ambassador to Israel who identifies with the most right-wing Israeli settler elements, a White House appointed chief negotiator who is Jewish and a Jewish son-in-law who is also involved in formulating Middle East policy. Is anyone providing an alternative viewpoint to eternal and uncritical support for Benjamin Netanyahu and his kleptocratic regime of racist thugs? I think not.

There are a couple of simple fixes for the dominant involvement of American Jews in foreign policy issues where they have a personal interest due to their ethnicity or family ties. First of all, don’t put them into national security positions involving the Middle East, where they will potentially be conflicted. Let them worry instead about North Korea, which does not have a Jewish minority and which was not involved in the holocaust. This type of solution was, in fact, somewhat of a policy regarding the U.S. Ambassador position in Israel. No Jew was appointed to avoid any conflict of interest prior to 1995, an understanding that was violated by Bill Clinton (wouldn’t you know it!) who named Martin Indyk to the post. Indyk was not even an American citizen at the time and had to be naturalized quickly prior to being approved by congress.

Those American Jews who are strongly attached to Israel and somehow find themselves in senior policy making positions involving the Middle East and who actually possess any integrity on the issue should recuse themselves, just as any judge would do if he were presiding over a case in which he had a personal interest. Any American should be free to exercise first amendment rights to debate possible options regarding policy, up to and including embracing positions that damage the United States and benefit a foreign nation. But if he or she is in a position to actually create those policies, he or she should butt out and leave the policy generation to those who have no personal baggage.

For those American Jews who lack any shred of integrity, the media should be required to label them at the bottom of the television screen whenever they pop up, e.g. Bill Kristol is “Jewish and an outspoken supporter of the state of Israel.” That would be kind-of-like a warning label on a bottle of rat poison – translating roughly as “ingest even the tiniest little dosage of the nonsense spewed by Bill Kristol at your own peril.”

As none of the above is likely to happen, the only alternative is for American citizens who are tired of having their country’s national security interests hijacked by a group that is in thrall to a foreign government to become more assertive about what is happening. Shine a little light into the darkness and recognize who is being diddled and by whom. Call it like it is. And if someone’s feelings are hurt, too bad. We don’t need a war with Iran because Israel wants one and some rich and powerful American Jews are happy to deliver. Seriously, we don’t need it.

Philip M. Giraldi, Ph.D., is a former CIA counter-terrorism specialist and military intelligence officer who served nineteen years overseas in Turkey, Italy, Germany, and Spain. He was the CIA Chief of Base for the Barcelona Olympics in 1992 and was one of the first Americans to enter Afghanistan in December 2001. He is Executive Director of the Council for the National Interest, which seeks to promote a U.S. foreign policy in the Middle East that is consistent with American values and interests.

*Editor’s note: While today virtually all national mainstream Jewish organizations support Israel, most Jewish Americans originally were not in favor of  Zionism, and some, such as the American Council for Judaism opposed it (several members writing excellent books on the topic), and that organization, a number of others, and many Jewish Americans continue to strenuously object to Israeli actions today. Similarly, many Jewish Americans oppose U.S. wars, and it appears that over half  support the Iran agreement, although this has fluctuated. A 2007 Gallup poll reported that 77 percent of Jewish respondents felt the Iraq war had been a mistake.

**While Giraldi’s opinion piece in some places paints with too broad a brush, as noted above, his statements about the origins of neoconservatism have been described by many commentators (for example here, here, and here), and are often discussed in Israeli media (for example here and here). In Israel, what we call, with more precision, the Israel lobby is referred to as “the Jewish lobby.”