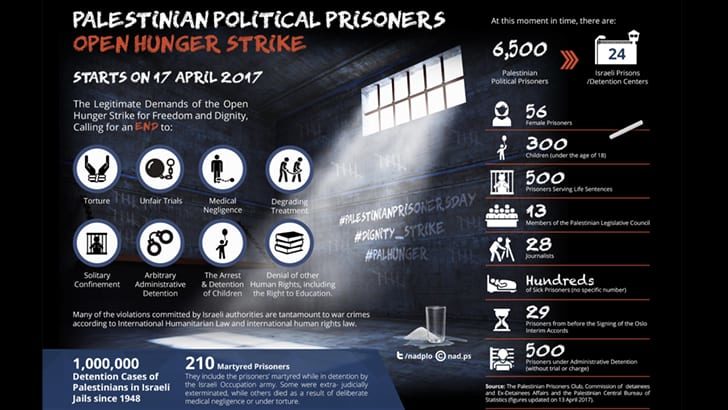 Over 1,500 Palestinian prisoners being held in Israeli jails began a hunger strike on April 17, the 43rd annual Palestinian Political Prisoner’s Day. The hunger strike was called for by Marwan Barghouti, a Fatah leader who has been imprisoned since 2002.

The detainees, held in several Israeli prisons, are demanding improvements in conditions and an end to solitary confinement, heavy restrictions on family visits and administrative detention – prolonged imprisonment without charge.

They are also calling for Israel to ease restrictions on the entry of books, clothing, food and other items from family members.

There are currently 6,300 Palestinian political prisoners, 500 of them in administrative detention, according to the Palestinian prisoners’ rights group, Addameer. Israel is holding 300 child prisoners.

More than 300 Palestinians have been in prison since before Israel and the Palestine Liberation Organization signed the Oslo accords in 1993.

Israel has responded by putting Barghouti in solitary confinement and stating that it will not consider any of the hunger strikers demands (via The Guardian):

Gilad Erdan, [Israel’s] public security minister, vowed that the authorities would not negotiate with prisoners and said Barghouti had been moved from Hadarim jail, the initial centre of the hunger strike, to another prison – reportedly in Haifa – and placed in solitary confinement.

“They are terrorists and incarcerated murderers who are getting what they deserve and we have no reason to negotiate with them,” Erdan told army radio.

Hunger striking is the most peaceful form of resistance available. It inflicts pain solely on those who participate and on their loved ones, in the hopes that their empty stomachs and their sacrifice will help the message resonate beyond the confines of their dark cells.

Decades of experience have proved that Israel’s inhumane system of colonial and military occupation aims to break the spirit of prisoners and the nation to which they belong, by inflicting suffering on their bodies, separating them from their families and communities, using humiliating measures to compel subjugation. In spite of such treatment, we will not surrender to it….”

I was only 15 when I was first imprisoned. I was barely 18 when an Israeli interrogator forced me to spread my legs while I stood naked in the interrogation room, before hitting my genitals. I passed out from the pain, and the resulting fall left an everlasting scar on my forehead. The interrogator mocked me afterward, saying that I would never procreate because people like me give birth only to terrorists and murderers.

A few years later, I was again in an Israeli prison, leading a hunger strike, when my first son was born. Instead of the sweets we usually distribute to celebrate such news, I handed out salt to the other prisoners. When he was barely 18, he in turn was arrested and spent four years in Israeli prisons.

Stay up to date by checking Palestinian prisoners rights organizations Addameer and Samidoun, and tweet with the hastags #PalHunger and #PrisonersDay.