You Are Here: Home → ‘NYT’ reporter’s book is more frank about Adelson buying foreign policy for Israel than ‘NYT’ was 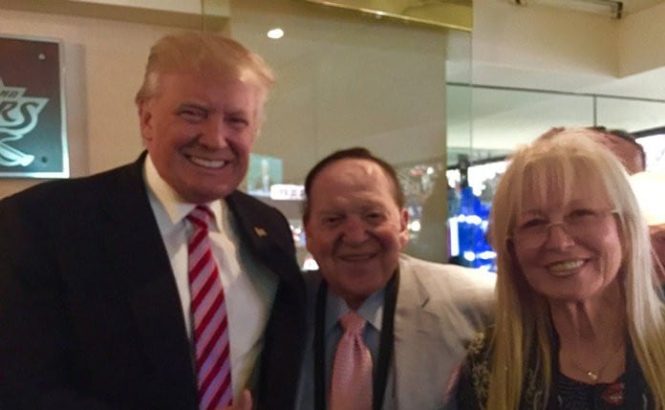 Trump with Sheldon and Miriam Adelson.

A new book by Maggie Haberman is frank about a story the New York Times didn’t tell us — Donald Trump sold his policy on Israel to the late Sheldon Adelson… (While others reported on Adelson’s influence in real time, it’s rare for establishment journalists like Maggie Haberman to divulge it, even if belatedly. Jewish insider reports that Haberman’s father used to be the Times’ bureau chief in Jerusalem, one of a string of such bureau chiefs)

The scandal in plain sight is that Trump sold out the interests of the American people to a foreign country for millions in campaign contributions. Maggie Haberman scratches the surface of that scandal in her book. But the Times avoids it at all costs, because it might credit antisemitic ideas, of Jewish wealth and influence, and disloyalty…

A new Trump book by Maggie Haberman of the New York Times is frank about a story the paper was afraid to tell, Trump sold American foreign policy to his biggest donor the late Sheldon Adelson, whose only concern was Israel.

“Sheldon Adelson, the Republican Party’s biggest funder over the past decade, used a $20 million donation to a super PAC to pressure then-president Donald Trump to adopt the highly controversial decision to move the U.S. embassy in Israel from Tel Aviv to Jerusalem. That quid-pro-quo is described in New York Times journalist Maggie Haberman’s new book, ‘Confidence Man: The Making of Donald Trump and the Breaking of America,’” writes Eli Clifton at Responsible Statecraft.

Clifton says that Haberman implicitly acknowledges that the former president’s biggest funder “was most interested in promoting the interests of a foreign country.” Clifton quotes the book:

“Adelson’s singular focus was Israel… [In] Trump he saw a chance at enacting change in American policy toward [Israel], and gave $20 million to a super PAC working to elect him… As a candidate, Trump promised that he would open an embassy in Jerusalem ‘fairly quickly,’ and after his victory, Adelson pushed him to act on it. Over meetings during the transition and first year of the administration, Adelson assured Trump that the nightmare scenarios that he would be warned about in briefings as a possibility following such a move were overblown…

Trump’s sale of foreign policy ought to have been a major scandal during the Trump presidency — and god knows we tried to make a scandal out of it. But politeness and winking irony prevailed at our most influential news organization. Adelson died in 2021, at 87.

The Adelson purchase of U.S. foreign policy was well known throughout the Trump presidency, but our leading media never made that much of it. Sheldon and Miriam Adelson poured $133 million into Republican and Trump campaigns in 2016, but the media always downplayed the Adelsons’ intent. For instance, NPR had put the focus on Sheldon Adelson’s casino holdings, as if gambling regulations were his chief concern.

The Times actually misrepresented the embassy move in 2018, saying that Trump was delivering for Christian evangelicals.

On the week of the embassy move, the Times said Trump was delivering for evangelical Christians. “Amid Debate and Violence, Trump Delivers Embassy Victory to Christian Base,” By Elizabeth Dias, May 2018:

While the opening of the American Embassy in Jerusalem has triggered violence and political debate this week, it also stands as a sharp reminder of the close ties between the Trump administration and evangelical Christians — and of the victories that Mr. Trump has delivered for his evangelical base.

That story buried reference to Adelson in a list of guests at a party at the David Citadel hotel in Jerusalem:

At the hotel, removed from the images of nearby violence, supporters like Ms. [Penny Young] Nance [a Christian who prayed for the move] mingled with guests including Mike Huckabee, the radio personality and former governor of Arkansas; Sheldon Adelson, a top Republican donor and casino billionaire; and Jay Sekulow, the president’s personal lawyer who was raised Jewish but converted to Christianity.

The Times was just as unstraightforward in an article at the end of the Trump presidency summing up Trump’s many gifts to Israel, culminating in his decision to let a spy for Israel serve out his parole in that country. “For Netanyahu and Israel, Trump’s Gifts Kept on Coming,” was the headline on the article by David Halbfinger. It described an “extraordinary four-year stretch in the two countries’ relationship, during which President Trump’s treatment of Prime Minister Benjamin Netanyahu has been nothing short of lavish.”

The only reference to Adelson was deep in that story.

In late October, Friedman and Mr. Netanyahu signed agreements allowing U.S. government grants to go to Israeli research institutions in occupied territory. The only such institution is Ariel University, funded by Sheldon Adelson, the casino billionaire who is a backer of both Mr. Trump and Mr. Netanyahu.

The Times was more honest about Adelson’s role and interests in other articles, but even these had a coy quality. “Sheldon Adelson sees a lot to like in Trump’s Washington,” the Times headlined an article in Sept. 2018.

The return on investment for many of the Republican Party’s biggest political patrons has been less than impressive this year. But not for Sheldon Adelson…

More than a dozen people who know the Adelsons professionally or personally, some of whom are also friendly with Mr. Trump, said in interviews that the durability of Mr. Adelson’s relationship with the president hinges not on any personal affinity between the two, but on a mutual appreciation for something both men have built their careers on: the transaction…

Morton Klein, a longtime friend of Mr. Adelson’s and fellow pro-Israel activist, said an overjoyed Mr. Adelson called him from the car right after the meeting in which President-elect Trump declared how seriously he took his promise to move the embassy.

Tom Friedman was also honest about the embassy deal, saying that Trump got millions of dollars from Adelson, a Jewish supporter of Israel, “and warm applause from evangelicals… but America got nothing.”

But again, where is the scandal? No one at the Times ever connected all the dots and said that Trump had sold out foreign policy to someone who cared only about Israel.

The Times didn’t tell readers what we here did all the time: that Adelson said he wished he had served in the Israeli army, not the American one; and that in 2013 Adelson called on Barack Obama to nuke Iran not negotiate with the country.

Trump withdrew from the Iran deal in 2018, of course, surely fulfilling another promise he had made to Adelson. “[T]oday’s unpopular announcement may have been exactly what two of Trump’s biggest donors, Sheldon Adelson and Bernard Marcus, and what one of his biggest inaugural supporters, Paul Singer, paid for when they threw their financial weight behind Trump,” Eli Clifton wrote at the time of three Jewish pro-Israel billionaires.

A year later Adelson said that Trump left the deal “for Israel”:

“The biggest thing you did for Israel was breaking up and terminating the horrible, one-sided, catastrophic deal…”

The scandal in plain sight is that Trump sold out the interests of the American people to a foreign country for millions in campaign contributions. Maggie Haberman scratches the surface of that scandal in her book. But the Times avoids it at all costs, because it might credit antisemitic ideas, of Jewish wealth and influence, and disloyalty.

Trump has been more honest about it himself. “The first person that congratulated [Biden on his election victory] was Bibi Netanyahu, the man that I did more for than any other person I dealt with. … Bibi could have stayed quiet. He has made a terrible mistake… I haven’t spoken to him since… Fuck him,” Trump told Axios last year.

And during the Republican primaries in 2015 when Adelson was reported to be tilting toward Marco Rubio, Trump tweeted, “Sheldon Adelson is looking to give big dollars to Rubio because he feels he can mold him into his perfect little puppet. I agree!”

Trump became that puppet. What a pity the press doesn’t care about the disastrous results of that process.

And of course Biden has not reversed Trump’s policies, either the embassy move or restoring the Iran deal, surely out of concern for campaign contributions.

Founded in 2006 as a personal blog of journalist Philip Weiss, Mondoweiss grew inside the progressive Jewish community.