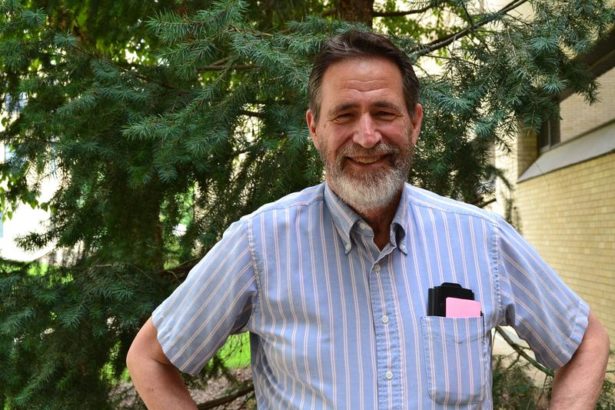 Professor George Smith, just awarded the Nobel Prize in chemistry, has long been active and outspoken in his support of Palestinian human rights. In his articles he quoted a wide range of sources, from Charles Glass to Avi Shlaim to Tom Segev to Alison Weir.

In an article published last year, he included the following: “The last half of 1916 had been a perilous low-point in Britain’s fortunes in World War I; Britain was desperate for allies. Zionists exploited this situation by linking British support for a Jewish homeland in Palestine to the belated U.S. decision to enter the war on Britain’s side in April 1917 — a decision Brandeis had argued for. Alison Weir’s study of U.S. engagement with Zionism, Against Our Better Judgment, includes a chapter on this little-known aspect of World War I history.”

Nobel laureate Smith has been repeatedly smeared as anti-Semite, but remained dedicated to anti-Zionism

As we noted the other day, the Palestinian solidarity community is reveling in the fact that George P. Smith won the Nobel Prize in chemistry because the 77-year-old retired biologist has long been outspoken on Palestinian rights. It’s not often that prestige is associated with the Palestinian side; though Vanessa Redgrave, Roger Waters, Stephen Hawking and Noam Chomsky are precedents.

Looking back over Smith’s public record on Palestine, you can see his evolution and dedication to ideals, and also the fierce opposition that he has met, in Columbia, Missouri.

It appears that Smith began as many of us did in the U.S., with co-existence efforts. In 2007, Smith was a leader of an inter-faith breakfast at the University of Missouri and a member of a Jewish group called Boone Tikkun. “Working to heal the Israel-Palestine conflict is the primary focus for us,” he told the student newspaper then.

Three years later his Jewish group folded into PIPA, Palestine Israel Peace Association, another co-existence effort at the school. The group was led by a Palestinian doctoral student. And one of its leaders said, “We want it to be about the conflict, but we want it to be both sides.”

In 2012, Smith wrote a piece for us in which he called for democracy between the river and the sea and described his own progress from liberal Zionism.

Another term for apartheid in Palestine is Zionism, the ranks of former liberal Zionists swelling steadily as one by one we reluctantly, belatedly come to acknowledge the equation.

By 2015, Smith was reported to be a “self-proclaimed ‘post-Zionist’ and ‘Nakba Jew-in-law’.” And also an anti-Zionist.

In that year, several Jewish groups sent a letter to the University of Missouri’s chancellor saying that anti-Semitic vandalism on campus had been fostered by “virulently anti-Israel events,” including a panel discussion titled “Palestine in Context,” the school paper reported, “during which MU Professor George Smith called for an end to Zionism.”

Smith wrote a letter to the student paper to explain that anti-Zionism is not anti-Semitic but an equal-rights movement opposed to a “Jewish sectarian regime” and dispossession and oppression of Palestinians. An excerpt:

Anti-Zionism is a social justice movement patterned after the civil rights campaign in the U.S. and the anti-Apartheid campaign in South Africa. Its core demand is equal rights for all the people who are currently governed by the Jewish sectarian regime in Israel. Half of those people are Palestinian Arabs, who are subject to discriminatory Jewish ethnocratic rule in Israel; to ongoing dispossession and oppressive Israeli military rule in the occupied West Bank; and to a destructive economic siege and periodic bloody assaults in Gaza. Anti-Zionism’s signature tactic is the non-violent Boycott, Divestment and Sanctions campaign against Israel until it complies with international law, as called for in 2005 by 170 Palestinian civil society organizations. It totally rejects anti-Semitism and the expulsion of Israeli Jews from the homeland they share with Palestinian Arabs. It seeks to replace Jewish ethnocratic governance with a liberal democracy that guarantees equal rights for all citizens — not with Palestinian Arab ethnocratic governance. It does not threaten Jewish students at Mizzou or any other campus, though it seeks to persuade them to join its struggle for justice. A small but rapidly growing minority of Jews have already joined, including in leadership roles.

Shoshana Lewin, a Mizzou graduate (who is evidently an editor at the Jewish Journal in L.A.), responded that Smith was a “so-called” professor spewing hate:

With all the hatred lately around campus, there is absolutely no purpose in running a letter from anti-Semite, anti-Israel “so-called” professor George Smith. His letter drips with hate and intolerance.

That strikes me as a very unfair attack. In all the articles I’ve read, Smith’s tone has been moderate (just as his Nobel acceptance speech last week was remarkable for its deference to a broad scientific community). For instance, in March 2015, +972 wrote a piece on the new activism among Palestinians in Israel, in which a young Palestinian said, “Society has come to a point where you can’t even think of an Arab-Jewish coalition,” and Smith wrote a comment in concern:

I hope this is wrong. If Palestinian liberation is unwilling to welcome Israeli Jewish partners, the way the African National Congress welcomed justice-loving whites during the anti-apartheid struggle in South Africa, the day of liberation will be put off, perhaps indefinitely. This magazine and many other signs show that there are plenty of justice-loving Jews, both in Israel and elsewhere. If the conflict is nothing more than a squabble between nationalities for sovereignty over land, Zionism will resist indefinitely, with all the superior force at its disposal, and the global community will not interfere. It’s the equal rights movement’s task to help Israel’s Jews liberate themselves from Zionism.

At that time, Smith as an emeritus professor sought to offer a course on Zionism at the University of Missouri. The course proposal came under great political pressure from the Israel lobby as a promotion of “bigotry and misinformation” and was ultimately canceled for lack of enrollment to the delight of pro-Israel groups.

“Smith said he was unable to recruit during the enrollment period and believes that is why there was no interest in the class,” the student paper at the University of Missouri reported.

The Jewish News Service reported on the political pressure: “Sixteen local, national, and international organizations wrote a letter to MU Chancellor R. Bowen Loftin urging him to cancel the class before it became ‘a stain on your university’s reputation and a disservice to students. … Smith’s proposed course would certainly contribute to a campus climate favorable to anti-Semitic acts.’”

The JNS said that Smith would have taught works by anti-Zionist authors such as Ilan Pappé, “who has accused Israel of ethnic cleansing.” And it said that in letters to the editor, Smith “uses phrases such as ‘Zionist mythology’ and accuses Israel of ‘colonization of the Occupied Palestinian Territories.’”

The JNS accused Smith of heckling an Israeli reservist who had visited the school as part of a StandWithUs tour of Israeli soldiers. But Smith demurred:

“I do go to pro-Zionist meetings, but I don’t disrupt. I am just vocal with my questions,” he told JNS.org. “People have freedom of speech. Our university does not sensor [sic] our political speech—or any other kind of speech.”

One student said the class would be “a front for Dr. George Smith to spew anti-Israel propaganda,” the JNS reported; and Smith was smeared as a bully:

Students feared that if Smith has few qualms about using intimidation in group meetings, he would be equally as uninhibited in the classroom. The university, however, did not share those same sentiments.

Though the JNS did allow Smith to defend himself with typical self-effacement:

“Can an activist teach a class? It runs against the fundamental principles of academic honesty for a teacher to use his position of power to push a particular point of view. What I claimed—and who knows if I really could have lived up to this—was that if a student comes into this course convinced and committed to Zionism then that student will leave a better Zionist,” he said.

The JNS also said that the Jewish community would not rest in keeping Smith from ever teaching his class:

[A]n affidavit is being prepared by Jewish community activists, in conjunction with the university legal department, that would help ensure Smith will be turned down next time he tries to teach about Zionism.

A source, who spoke on condition of anonymity because her testimony is tantamount to the affidavit, said four students that don’t feel safe with Smith leading anything on this topic have provided evidence. She has provided a series of harassing anti-Israel emails from Smith that will back up this case.

That hysteria was reflected in a newspaper I used to write for, the Observer, by an Israel advocate named Paul Miller who likened Smith to David Duke:

Would you let David Duke teach a class on African-American history? How about Anita Bryant starting an LGBTQ studies program? Beyond incomprehensible—the makings of a Saturday Night Live skit. But this is no laughing matter. This insanity is a reality, and your children are being indoctrinated.

George Smith despises Israel. The University of Missouri (Mizzou) biology professor has called the creation of the Jewish State “a shameful chapter in Jewish history.”

Smith was then featured on the website Canary Mission, which seeks to inflict career damage on students and professors who speak up for Palestine.

Smith did not walk away. A year ago, on the anniversary of the Balfour Declaration, he contributed a piece to the Columbia Daily Tribune, “How Palestine Became Jewish.” Smith quoted a wide range of historical/ideological sources from Charles Glass to Avi Shlaim to Tom Segev to Alison Weir.

The Balfour Declaration reflected in some part the sincere Christian Zionism of Prime Minister David Lloyd George and of Balfour himself. Far more important, however, was the considerable political influence of British Zionists under the able leadership of Chaim Weizmann, and of American Zionists led by Louis Brandeis, a close adviser to President Woodrow Wilson. The last half of 1916 had been a perilous low-point in Britain’s fortunes in World War I; Britain was desperate for allies. Zionists exploited this situation by linking British support for a Jewish homeland in Palestine to the belated U.S. decision to enter the war on Britain’s side in April 1917 — a decision Brandeis had argued for…

More than 90 percent of Palestine’s population in 1917 were Arabs (including local Sephardi Jews), but they did not figure in Britain’s policy. As Balfour famously remarked in 1919, the aspirations of Zionist settlers were “of far profounder import than the desires and prejudices of the 700,000 Arabs who now inhabit that ancient land.”…

Neither Britain nor Zionists had the right to dictate the fate of Palestine. … Today there can be no excuse for celebrating this sordid chapter in settler-colonialist injustice, especially in light of the ongoing nakba: the catastrophe that Palestine’s “non-Jewish communities” continue to suffer in consequence.

George P. Smith is the only University of Missouri professor to win the Nobel Prize, and the school is today hugely proud of the scientific work he carried out in its labs. If his intellectual record shows anything, he is not one to rest on his laurels.

P.S. To repeat from our earlier coverage of Smith’s award: The New York Times in its long report on the prize never mentioned Smith’s anti-Zionism.

Weir’s book, a best-seller in several categories on Amazon, is available here. Bulk copies are available at a discount by writing to materials@ifamericansknew.org