You Are Here: Home → Next year in Bethlehem: Gaza Christmas celebrated despite siege

Next year in Bethlehem: Gaza Christmas celebrated despite siege 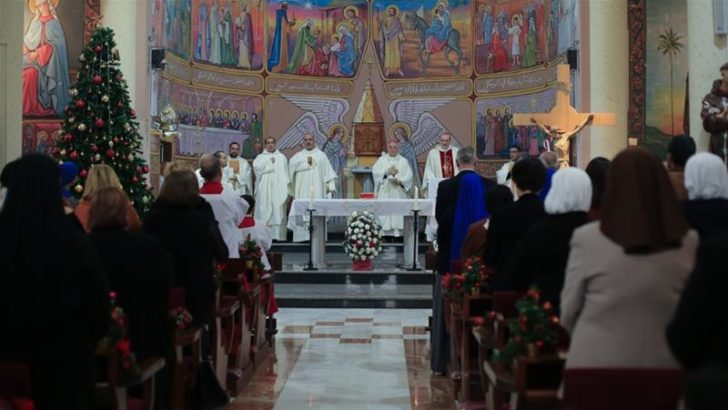 For the 11th year, Gaza’s Christian minority celebrates Christmas under Israeli siege, unable to join family in West Bank. Travel requests are mostly denied or ignored from an occupying country that claims to promote freedom of religion and worship.

For yet another year, Gaza’s tiny Orthodox Christian minority will not be able to celebrate Christmas with a visit to Bethlehem in the occupied West Bank.

With the ongoing Israeli siege on the enclave, Palestinians in Gaza are prohibited from uniting with family members in the West Bank, and are barred from visiting Bethlehem, where the Nativity Church is located.

Before Gaza fell under siege, “the days of Christmas were livelily celebrated – with the attendance of dignitaries – in large public squares with music, diverse shows, scout parades, a huge lit-up tree and tens of people dressed as Santa”, Samir Abu Nussira, a resident of Gaza, told Al Jazeera.

“The streets were beaming with joy and excitement, people were genuinely happy,” Nussira said.

“Back then, we used to celebrate at the Nativity Church, then visit our relatives in other parts of the West Bank on Christmas Eve,” Nussira continued.

“This year, however, my wife and I petitioned [the Israeli authorities] to travel with our kids to Bethlehem for Christmas, but only my children received a permit to travel out of Gaza, while my wife and I were rejected.”

Israel allows Christians to exceptionally petition to the Coordinator of Government Activities in the Territories (COGAT), an Israeli military body that administers parts of the West Bank, to cross over from Gaza during the holiday season – but permits are rarely granted.

Petitioning does not guarantee acceptance, according to Kamel Ayyad, Director of Public Relations of the Orthodox Church in Gaza.

“This year, we submitted 1,000 petitions to visit Bethlehem and Jerusalem, but we received 104 rejections … with the Israelis citing ‘security concerns’, which if their usual pretext,” Ayyad told Al Jazeera.

“Some 350 people were accepted, and the rest never heard back about their applications,” he said.

“Most of those accepted were children, while their parents received rejections and were not granted permits to escort them,” Ayyad added.

He noted that Israel sets age criteria where petitioners need to be 18-years-old or younger, or 50 and older.

Still, many who were above 50-years-old had their petitions rejected, Ayyad said.

“There are no clear rules or processes here, and it’s only getting worse every year,” he said. “Israel does not differentiate between Muslim and Christian Palestinians. If you are merely Palestinian, you’ll continue to be subjected to Israel’s collective punishment, strict measures and travel bans.”

COGAT claims on its website that “freedom of worship and religion is part of the values Israel promotes, and we are working to promote their fulfilment”.

Despite the challenges, Palestinians in Gaza come together and embrace the spirit of Christmas in a display of Palestinian unity.

This year, a pre-Christmas celebration was held at the front yard of the Young Men’s Christian Association (YMCA) in Gaza City on Saturday, where people from across the Palestinian political and social spectrum came to enjoy a celebratory evening.

A huge Christmas tree was neatly decorated and lit up, a young chorus performed several music tracks, scouts paraded with drums and Palestinian flags, and people of different ages dressed up as Santa Claus, including children.

“The occupation prevented us from celebrating in Bethlehem, but we nonetheless will continue to celebrate wherever we are,” Elias Al-Jilda, a YMCA board member, told Al Jazeera.

“Through our celebration, we show the world our love for life and our homeland, as we show that we, as one Palestinian people, will continue to seek dignity and freedom through the simplest of things.”

“Our presence here shows that we are one people, with no place for hate and discrimination between us,” Gaza’s Mayor Ibrahim Abu Al-Naja told Al Jazeera.

“Our days of happiness are few, but we should nonetheless always show our oppressor that despite the blockade, we will rejoice and light up the Christmas tree.”

For some, lighting up the Christmas tree is a sign of hope for better things to come.

“We greatly hope for a life of peace and security; where the blockade is lifted and the West Bank reunites with Gaza,” Majid al-Amsh, a YMCA member, told Al Jazeera.

The old Orthodox Church of Saint Porphyrius, in Gaza’s city centre, is preparing for the celebrations on December 25.

Twelve years ago, Gaza was home to more than 3,000 Christians; who held tight to their homes despite the hardships of living under occupation.

But the Israeli blockade – coupled with occasional Israeli air raids and scourges of violence – drove most to escape from the Gaza Strip over the years.

According to Ayyad from the Orthodox Church in Gaza, the number of Gaza’s Christian community members barely exceeds 1,000.

And those left in Gaza continue to be conflicted between continuing to endure a difficult life under the siege and following in the footsteps of others in exile.