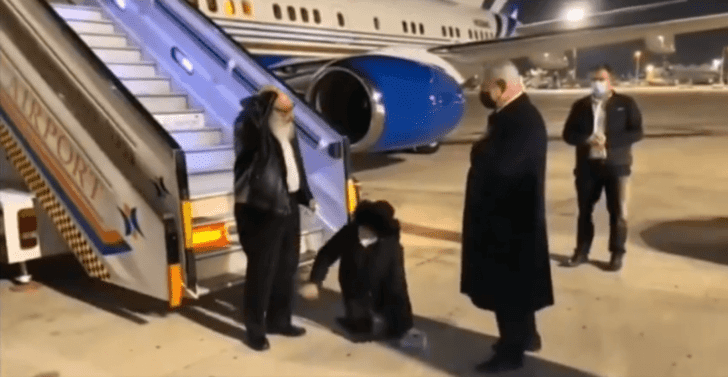 Jonathan Pollard’s spying for Israel – which likely cost American lives – landed him in prison in the U.S. for 30 years. This week, he flew on one of Sheldon Adelson’s planes to Israel, where he was welcomed “home” by its prime minister. He sold over one million pages of materials to Israel, earning him the dubious title of stealing more secrets in less time than any other spy in US history…  Seven U.S. Secretaries of Defense had said they didn’t want him freed because he had committed such serious offenses…

by James North and Philip Weiss, reposted from Mondoweiss

[Note: Gideon Levy, an Israeli Jewish journalist, remarked of Jonathan Pollard, “let’s not make him a national hero, as the right would like to do. Pollard is neither a hero nor is he a nationalist. He’s a spy, an American Jew who betrayed his country, doing damage to both his community and Israel.

“Pollard said he acted on Zionist motives but based on published reports he offered his services to a few other countries as well, including the apartheid regime of South Africa, Islamist Pakistan and what was then known as Red China. That’s what his conscience was like. His actions were for monetary greed; he wasn’t a spy for hire. His Israeli handlers, the main ones to blame for the fiasco, were never punished—they were also hailed as heroes in Israel.”

In “Capturing Jonathan Pollard,” Ronald Olive, head of the counterintelligence group that brought Pollard to justice, reveals that for 1 1/2 years, Pollard systematically stole highly classified documents from almost every major intelligence agency in the US, using his security clearance to carry bundles of paper out of his office. He sold over one million pages of materials to Israel, earning him the dubious title of stealing more secrets in less time than any other spy in US history (for more background on the Texas-born spy for Israel, read this).]

The news today is that Jonathan Pollard, the former Navy intelligence analyst who spent 30 years in prison for spying for Israel, flew to that country and got a hero’s reception in the middle of the night at the airport by Prime Minister Benjamin Netanyahu. Netanyahu went to the steps at the plane and handing Pollard, who is Jewish, an Israeli I.D. card, said, “You’re home.”

The amazement is that Netanyahu participated in this staged drama, putting up video on his twitter account of Pollard and his wife kissing the ground as the PM met them. Whatever domestic political value the drama had, the Prime Minister is sticking his thumb in the eye of the American security establishment, which despised Pollard, who spent 30 years in prison here for his crimes.

American Israel supporters regularly tell us that it is in the U.S. national interest to support Israel right or wrong and give the country $4 billion in aid a year. Rep. Ted Deutch said it last week,

“Some of my colleagues want to shift the conversation on Israel and talk about withholding aid and punitive measures. It’s up to all of us to explain why it’s not in our interest to do that. . . I don’t think it’s in our interest to start putting restrictions on aid that might impact Israel’s ability to protect innocent civilians.”

Actually US interests and Israeli ones depart all the time from one another, and Netanyahu just underlined the fact, embracing a guy whom seven secretaries of Defense said they didn’t want freed because he had committed such serious offenses.

Americans died because of Pollard’s crimes, according to prosecutor Joseph DiGenova (in the Los Angeles Times):

Pollard was freed from prison five years ago but lived under travel restrictions. Trump lifted those restrictions a few weeks ago, and today we learn that Pollard was flown to Israel on a plane owned by Sheldon Adelson, the biggest Republican donor, whose only issue is Israel.

Adelson has said that he wishes he had served in the Israeli army not the American army.

And Trump has fulfilled every pro-Israel Ask on Adelson’s wishlist in exchange for 100s of millions of campaign contributions — from killing the Iran deal to legalizing illegal Israel settlements to defunding Palestinian refugees to moving the Embassy to Jerusalem. The only thing Trump hasn’t delivered is a war with Iran, but he’s got a few weeks to go. . .

“One of, if not THE, biggest American political donors gave a VERY expensive ride to a man convicted of espionage against the United States. This seems like a big deal,” says Eli Clifton.

No, it’s just the ongoing scandal in plain sight: the Israel lobby using money to sway U.S. Middle East policy, against the best interests of the American people.

Netanyahu once said the U.S. is “something that can be easily moved,” and he appears to know what he is talking about. As Susan Abulhawa commented today, “Chelsea Manning, Edward Snowden, and Julian Assange are locked up and/or in fear for their lives, while this criminal gets a free pass to go colonize in my homeland.”

At least the New York Times article on Pollard’s trip highlights Netanyahu’s bizarre middle of the night ceremony and Adelson’s airplane and openly mentions the “dual loyalty suspicion” that Pollard’s advocacy created. “[O]thers faulted [Pollard] for having created enormous problems for Jews in the United States government who felt that their loyalties had been suddenly called into question.”

This was not a small or casual case. Pollard stole suitcases-full of documents, per the National Public Radio report. From our earlier coverage:

The reason that Pollard was kept in prison for so long is that American authorities knew that he had taken a vast amount of US intelligence, including a top secret manual detailing methods for the collection of intelligence around the world.

Here is an excerpt of a 1999 piece by Seymour Hersh in the New Yorker, detailing the allegations that the material ended up in Soviet hands, as a trade for Soviet emigres to Israel:

A number of officials strongly suspect that the Israelis repackaged much of Pollard’s material and provided it to the Soviet Union in exchange for continued Soviet permission for Jews to emigrate to Israel. Other officials go further, and say there was reason to believe that secret information was exchanged for Jews working in highly sensitive positions in the Soviet Union.

A significant percentage of Pollard’s documents, including some that described the techniques the American Navy used to track Soviet submarines around the world, was of practical importance only to the Soviet Union. One longtime C.I.A. officer who worked as a station chief in the Middle East said he understood that “certain elements in the Israeli military had used it” — Pollard’s material — “to trade for people they wanted to get out,” including Jewish scientists working in missile technology and on nuclear issues.