You Are Here: Home → Musta’ribeen, Israel’s agents who pose as Palestinians 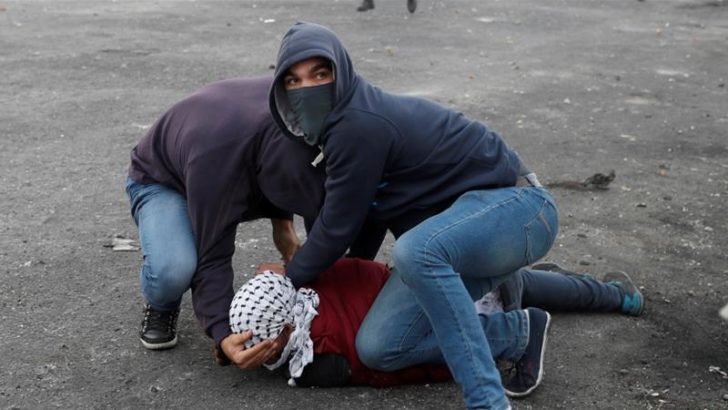 Stealthy and deadly, “Musta’ribeen” (Israeli undercover agents) have been a threat to Palestinians since before the Jewish State was created. Today they pose a particular challenge as they infiltrate protests and coordinate actions with the army – but Palestinians are onto them.

They are dressed like Palestinian protesters, speak with the same accents and expressions, and show the same mannerisms. Their faces covered with checkered keffiyehs or balaclavas, they chant against the Israeli army and sometimes throw stones in the direction of the soldiers, all while drawing in other protesters as they get closer and closer to the army.

Then, quick as a bang, the scene erupts, and this group suddenly turns on the rest of the Palestinian protesters, brandishing guns that were concealed under their shirts, firing in the air, grabbing those nearest to them and wrestling them to the ground.

The army advances and takes into custody the Palestinians that were caught, as the rest of the protesters disperse, screaming out one word as a warning to others: “Musta’ribeen!”

Musta’ribeen, or mista’arvim in Hebrew, is a word that is derived from the Arabic “musta’rib”, or one that is specialised in Arabic language and culture. In Israeli security terms, the word denotes security forces who disguise themselves as Arabs and carry out missions in the heart of Palestinian societies or other Arab countries.

The agents are given rigorous training, and in operations concerning the occupied territories, are taught to think and act like a Palestinian. Their main missions, according to Israeli affairs expert Antoine Shalhat, include gathering intelligence, arresting Palestinians, and – in their eyes – counterterrorist operations.

“The first musta’ribeen unit was established in 1942 before the state of Israel came into being until 1950,” Shalhat said. “This unit was part of the Palmach, an elite division of the Haganah militia, which went on to later become the core of the Israeli army.”

Not much is known about these agents because they operate in secret, he added. The Israeli army dissolves these units once their work is found out, and forms new ones to take their place.

“The agents must speak Arabic as if it is their mother tongue,” Shalhat said. “They undergo courses to master Palestinian dialects and Arabic accents according to which Arab country they operate in, such as Yemen or Tunisia.”

These courses take between four to six months and include how to master customs and religious practices, such as fasting and praying.

The agents use makeup and wigs to complete their disguise but are chosen according to how similar their physical features are to Arab countenances.

In total, the training can take up to 15 months, and consists of operational field work such as driving and sniping, how to move around in crowded Palestinian settings, and arms training.

“One of the most well-known units was the Rimon, which was established in 1978 and remained active until 2005,” Shalhat said. “Their work was mostly concentrated in the Gaza Strip. Another unit that operated in Gaza was called Shimshon during the 80s and 90s.”

“The Duvdevan 217 elite unit is still operative within the army. It was established during the 1980s by [former Israeli prime minister] Ehud Barak and currently functions in the West Bank and is considered the most active and secretive.”

Over the past two weeks, Palestinians have been protesting US President Donald Trump’s decision to recognise Jerusalem as Israel’s capital. Hundreds have been arrested by Israeli forces, and 10 people have been killed so far in the West Bank and Gaza Strip.

Last week, during one of the protests at Ramallah’s northern entrance near the illegal Bet Il settlement, a group of musta’ribeen infiltrated the protest and arrested three young Palestinian men, according to journalist Rasha Harzallah.

“They were about five in total, and pulled out their guns and began firing in the air,” she continued. “The army then suddenly advanced in huge numbers, and they began firing live bullets at people and in the air, even at the journalists.”

Harzallah, who works for the official Wafa news agency, said that the agent nearest to her was wearing a dark red shirt and had his face covered with a keffiyeh.

“Before, he was standing on the front line with the other Palestinian protesters throwing rocks at the Israeli army,” she said.

“The army then suddenly advanced quickly. Then I noticed the red-shirted man on top of a Palestinian protester, and he was waving his gun towards me and the photographer next to me shouting ‘don’t get close!'”

‘How can they tell who they are?’

Harzallah explained that before the musta’ribeen made their presence known, the protesters were throwing stones at the Israeli army. But the soldiers did not respond, which immediately raised suspicions.

“They did not do anything,” she said. “From experience, the protesters know that when the Israeli army stops firing sound grenades, tear gas, rubber bullets … then there’s a big probability that the musta’ribeen are present among them. But how can they tell who they are?”

In the 2015 protests commonly referred to by Palestinians as the “Intifada of the knives”, Harzallah witnessed another raid by the musta’ribeen, which she described as much worse.

“They fired their weapons at two Palestinians, one in the head and the other in his leg from point-blank range,” she said.

“I saw them drag the Palestinian they had shot in the head…I thought he was dead because I saw bits of his flesh on the ground.”

In an interview with Al Jazeera shortly after the incident, Ziyadeh relayed from his hospital bed that after being beaten by the musta’ribeen, they fired a bullet at his head and he lost consciousness.

“When I came round, they began interrogating me, but I told them I could not remember anything,” he said, his speech slurred. “They took me to the hospital and beat me up again.”

Ziyadeh underwent two surgeries and was interrogated and beaten after each one. His lawyer finally managed to set him free, and shortly after he was able to move one of his legs again.

With the emergence of the musta’ribeen in protests, Palestinians have learned to become more vigilant.

One way of differentiating themselves from the undercover Israeli agents is tucking their shirts into their waistbands, where concealed weapons would be seen.

“They should also take caution when a group drags other protesters closer to the army,” Harzallah said, “and make sure that there is a group monitoring other protesters.”