You Are Here: Home → Miriam Adelson picks up where late husband and GOP kingmaker left off 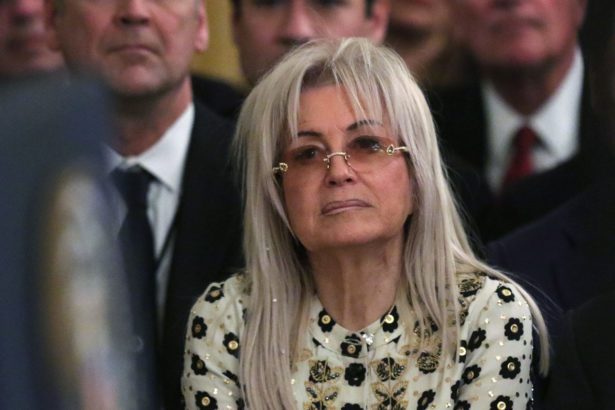 Miriam Adelson, now a widow, will likely be the GOP’s biggest donor in 2022 and 2024. Her demand to would-be recipients: unwavering, uncritical support for a foreign country. Miriam is an Israeli citizen; husband Sheldon had said he wished he’d served in the Israeli military rather than the U.S. Army. He’s buried in Israel. Politico buries the news…

It’s big news when a political party’s biggest funder announces, after a period of mourning for the death of their spouse, that they will be continuing their role as the go-to funder for congressional and presidential candidates in 2022 and 2024. You also might expect a discussion of how that donor expects to influence U.S. politics with their campaign donations. You’d be wrong.

Yesterday, Politico provided in-depth reporting on how “Republican mega donor Miriam Adelson — the widow of casino mogul and longtime GOP kingmaker Sheldon Adelson — is staging a return to politics, positioning herself to be a force in the 2022 midterms and beyond.”

This is big news. Miriam Adelson, a U.S.-Israel dual national, is worth $30 billion as the majority shareholder of Las Vegas Sands, a casino and resort company with enormous business interests in Singapore and Macau, a Chinese Special Administrative Region.

Foreign policy, both in the Middle East and East Asia, is clearly a central area of interest for the woman likely to emerge as the single biggest funder of Republican Party candidates in the 2022 and 2024 elections.

One of the couple’s final political acts, before Sheldon Adelson’s death on January 11th, was to fly Jonathan Pollard — a former U.S. Navy analyst who spent 30 years in prison after pleading guilty to spying for Israel — to Israel on one the family’s private 737s once Pollard’s travel ban was lifted.

Indeed, foreign policy has been the key-defining issue-area of the Adelsons’ political giving. The Adelsons helped to support the ultra-hawkish pro-Likud, anti-Iran echo chamber, including, among other groups, the Foundation for Defense of Democracies, the Israeli American Council, United Against Nuclear Iran, and the  Zionist Organization of America — all of which the couple financially supported over the last two decades. They also provided tens of millions of dollars to the American Israel Public Affairs Committee over the years, but abruptly withdrew their backing in 2007 because of its support in Congress for an economic aid package for Palestinians.

Miriam Adelson, individually, made her views on Trump’s foreign policy known — including support for moving the U.S. Embassy in Israel from Tel Aviv to Jerusalem, and withdrawing from the nuclear deal with Iran — in a 2019 op-ed in the Las Vegas Review Journal, a newspaper owned by the Adelsons. In it, she berated Jewish Americans for failing to prioritize the U.S.-Israel relationship by voting overwhelmingly for Democratic candidates. She wrote:

The world rallies to an America that is strong, and this strength is best shown by keeping faith with U.S. allies — of which Israel is the best.

By rights, Trump should enjoy sweeping support among U.S. Jews, just as he does among Israelis. That this has not been the case (so far — the 2020 election still beckons) is an oddity that will long be pondered by historians. Scholars of the Bible will no doubt note the heroes, sages and prophets of antiquity who were similarly spurned by the very people they came to raise up.

Would it be too much to pray for a day when the Bible gets a “Book of Trump,” much like it has a “Book of Esther” celebrating the deliverance of the Jews from ancient Persia?

Until that is decided, let us, at least, sit back and marvel at this time of miracles for Israel, for the United States, and for the whole world.

And in China, Sheldon Adelson, already showed he was eager to influence U.S. foreign policy in order to further his casino business interests.

In 2001, Adelson reportedly curried favor with the Chinese leadership and helped secure his initial casino license in Macau by persuading  Rep. Tom Delay (R-Texas), then the House majority whip, to halt a bipartisan resolution calling for the U.S. to oppose Beijing’s Olympics bid due to China’s problematic human rights record.

That casino license is up for renewal in 2022, and the company overseen by Miriam Adelson has taken pains to tie itself closer to Beijing, including appointing Wilfred Wong, former member of the National People’s Congress of the People’s Republic of China, as CEO of its Las Vegas Sands subsidiary Sands China.

Both Miriam and Sheldon Adelson received a public thanks from President Donald Trump at the January 2020 signing of the U.S.-China Phase One Trade Agreement.

But none of this context was provided in Politico’s write-up of Miriam committing to carry-on the political giving previously conducted in collaboration with her husband.

The only mention of the Adelsons’ overriding interest in influencing U.S.-foreign policy was in the 13th paragraph when the author, Alex Isenstadt, noted “Miriam Adelson shared her husband’s hawkish foreign policy views and his staunch support of Israel.”

Unlike Politico, the speakers were clear about what issues their audience, and their host Miriam Adelson, cared most about.

According to Jewish Insider, Haley attacked AIPAC, accusing the largest pro-Israel group in the U.S. of being insufficiently supportive of Israel at the expense of pursuing bipartisanship. Cruz praised Trump’s foreign policy decisions to relocate the U.S. Embassy in Israel to Jerusalem and withdraw from the nuclear deal with Iran, while attempting to claim credit for his own roles in both decisions. And Pence boasted to the audience that “under the Trump-Pence administration, if the world knew nothing else, the world knew this: America stands with Israel.”

While national political journalists may have chosen to ignore or overlook Miriam Adelson’s clear interest in steering U.S. foreign policy toward hawkish policies in the Middle East, at least inasmuch as the Republican Party can drive policy, the potential 2024 presidential candidates speaking at the event gave every indication that they understood the issues that motivate the Republican Party’s biggest donor: Israel, Iran, and promoting a hawkish U.S. foreign policy in the Middle East.