You Are Here: Home → Lithuania adopts Israel-centric definition of antisemitism 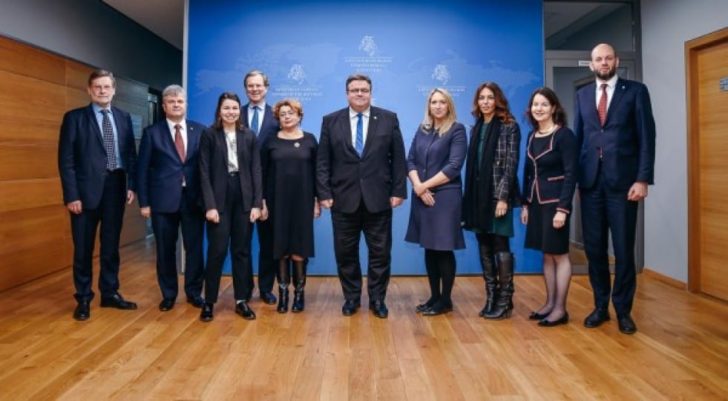 AJC Head David Harris (back) meets with Lithuanian Foreign Minister Linas Linkevičius (center), Chair of the Jewish Community of Lithuania Faina Kukliansky (fourth from left), and other officials. Topics included the European Union Mideast policy and relations between Lithuania and the state of Israel.

The latest success in the international campaign to change the meaning of antisemitism to include certain criticisms of Israel.

Lithuanian Foreign Minister Linas Linkevičius announced the decision today in a tweet, stating that the “Lithuanian Government has endorsed the international definition of anti‑Semitism by the International Holocaust Remembrance Alliance (IHRA). Anti‑Semitism has absolutely no place – neither in Lithuania, nor in other parts of the world.”

AJC CEO David Harris said, “Lithuania, which occupies a central place in the history of Jews in Europe, has asserted laudable leadership in responding to the call by the IHRA to recognize clearly the cancer of anti-Semitism and mobilize to effectively combat it. Let’s hope other European countries follow suit.”

During a two-day visit to Vilnius last week, an AJC delegation led by Harris discussed with Minister Linkevičius, among other issues, the possibility for Lithuania to accept in the near future the IHRA working definition of anti-Semitism, following its adoption by Austria, Bulgaria, Germany, Romania, and the United Kingdom.

The IHRA definition, adopted in 2016 by the alliance’s 31 member states, is based on the 2005 European Monitoring Centre (EUMC) Working Definition. It offers a clear and comprehensive description of anti-Semitism in its various forms, including hatred and discrimination against Jews, Holocaust denial, and, of particular note, anti-Semitism as it can at times relate to Israel.

AJC worked closely over a decade ago with the EUMC in developing this working definition as a tool for monitors and law-enforcement officials.

For more information on the global campaign to embed the new definition in countries around the world, see “International campaign is criminalizing criticism of Israel as ‘antisemitism’”