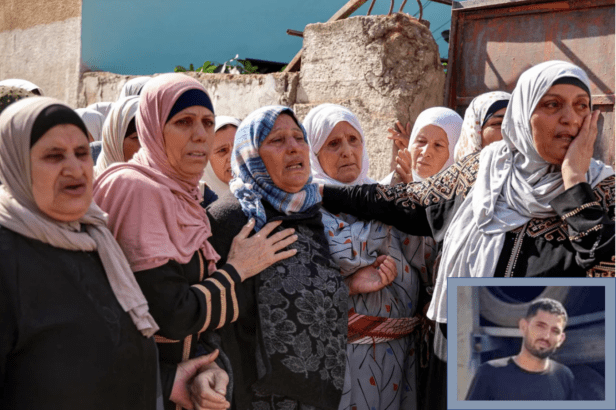 Relatives of Palestinian Saddam Bani Odeh, who was killed earlier by Israeli troops, react during his funeral in the village of Tammun near Nablus in the occupied West Bank on Nov. 16.

During a military raid of the town of Tubas, Israeli soldiers shot and killed Palestinian Saddam Hussein Bani Odeh, alleging he had been among a group resisting the invasion.

The Palestinian Ministry of Health has reported, on Tuesday morning, that Israeli soldiers shot and killed a young Palestinian man during protests that took place after the army invaded Tubas city, in the northeastern part of the occupied West Bank.

The Ministry verified that an Israeli soldier shot Saddam Hussein Bani Odeh, 26, from Tammoun town, south of Tubas, with a live round that went through his left shoulder, then his heart and lung.

The Palestinian was killed during protests that took place at the main entrance of Tubas and surrounding areas, when several army jeeps invaded the city, before the soldiers fired live rounds, tear gas bombs and rubber-coated steel bullets.

The Israeli army claimed that armed resistance fighters exchanged fire with the soldiers during the invasion and added that the slain Palestinian was one of the fighters.

In addition, the soldiers stormed the home of a former prisoner, identified as Ayser Maslamani, and ransacked the property before abducting him.

The soldiers also invaded and searched the home of Hamza Daraghma, before abducting him.