You Are Here: Home → Israeli Soldiers Abduct Four Palestinians During A Wedding 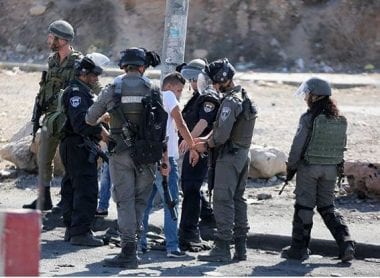 Israelis stopped dozens of cars on their way to a wedding, seized four Palestinians.

Israeli soldiers attacked, on Saturday at night, many Palestinians participating in a wedding ceremony in the town of al-‘Ezariyya, southeast of occupied East Jerusalem, and abducted four young men.

The WAFA Palestinian News Agency said the soldiers installed a roadblock near Maale Adumim colony, close to the main entrance of the town, and stopped dozens of cars heading to a wedding ceremony and party in al-‘Ezariyya, and abducted four young  men.

The army claimed that the Palestinians “attempted to attack soldiers,” after stopping them at the roadblock, and took them to an unknown destination.

The Palestinians were part of a convoy of cars heading towards the wedding ceremony, when the soldiers stopped them and attempted to block their path.

On Sunday at dawn, the soldiers invaded several areas in the occupied West Bank, broke into and searched many homes, and abducted at least eight Palestinians.