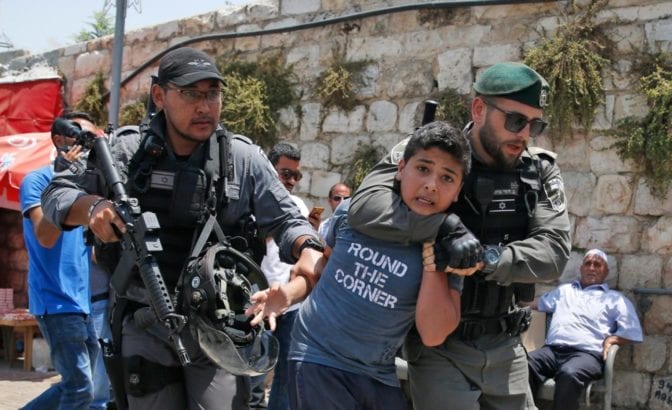 Violence and threats of violence (including sexual assault) are common against Palestinians in the Israeli detention system.

In a world where the oppressor always has the upper hand, this 15-year-old Palestinian boy had the courage to tell the story of his torture and sexual assault while in Israeli custody. The practice is well-documented, but Israel has so far escaped accountability.

An Israeli interrogator allegedly physically and sexually assaulted a 15-year-old Palestinian boy in Israeli custody during interrogation in mid-January at a Jerusalem detention facility.

The 15-year-old boy* was detained by Israeli paramilitary border police forces from his home around 5 a.m. on January 13, 2021, in the occupied East Jerusalem neighborhood of Issawiya. Israeli forces transferred him to Al-Mascobiyya interrogation and detention center in West Jerusalem where he was bound and blindfolded and detained in an interrogation room. An individual accused him of throwing stones and Molotov cocktails and then allegedly subjected the boy to physical and sexual violence amounting to torture, according to documentation collected by Defense for Children International – Palestine.

When he was detained on January 13, the boy was already subject to house arrest following a previous arrest in November 2020 and was scheduled to appear in court that day.

Upon arrival at Al-Mascobiyya interrogation and detention center, the boy was forced to sit in a hallway bound and blindfolded where he was subject to physical violence by those passing by, according to documentation collected by DCIP.

“Every two to three minutes, someone would come by and slap, push, punch, or kick me,” the boy told DCIP. “I kept silent and never said anything. I did not know what was going on, but it was painful and tiring.”

The boy alleges the individual then knocked him to the floor while blindfolded and raped him with an object, according to documentation collected by DCIP. The individual threatened that the sexual assault would continue unless he confessed to the allegations against him.

The boy was then made to stand against a wall, where the individual inflicted extreme pain on his genitals. “There are no words to describe that moment,” the boy told DCIP. The Captain subsequently threatened the boy, telling him that the physical and sexual violence would continue if he told his lawyer what had occurred.

Around 15 minutes after the incident, Israeli forces transferred the boy to another room where he met with a lawyer for about five minutes. Then, he was taken to a room where a man in civilian clothing introduced himself as an Israeli interrogator. The boy was interrogated for almost four hours, during which he experienced verbal abuse and was forced to sign papers written in Hebrew, the content of which he did not understand, according to information collected by DCIP.

With his court session adjourned for four days, the boy was detained in a room with four other children for three days. After that time, he was again taken to an interrogation room. He was interrogated for approximately four hours, at the end of which he was again forced to sign papers in Hebrew. The following day, January 17, he was released under the terms of house arrest pending another court session at a later date, according to information collected by DCIP.

“What he did to me was very oppressive and humiliating,” the boy told DCIP. “I want this house arrest to end because it is exhausting. I want my life back. I want to leave the house and see my friends.”

Palestinian children in the Israeli military detention system are overwhelmingly subjected to widespread and systematic violence and ill-treatment, according to documentation by DCIP. Between January 1, 2014, and December 31, 2019, DCIP collected sworn affidavits from 752 child detainees, describing their arrest, interrogation, and detention experiences. Of these, 72 percent were subjected to physical violence and 61 percent to verbal abuse. Less than one percent were threatened with sexual violence; however, sexual violence amounting to torture or cruel, inhuman, or degrading treatment are known to be underreported by child detainee survivors.

While the boy’s testimony is shocking, in recent years there have been consistent reports of sexual threats and violence against Palestinian children and adults by Israeli interrogators.

In 2013, a 14-year-old boy who was detained in the Russian Compound said that an Israeli interrogator threatened to rape him with a broomstick unless he signed a confession.

The same year, the Israeli human rights group B’Tselem reported that Palestinian children detained at Etzion police station in an Israeli settlement in the occupied West Bank had been habitually tortured and abused, and in some cases threatened with sexual assault.

More than 60 testimonies from Palestinians detained in the settlement between 2009 and 2013, mostly children, included accounts of “severe physical violence,” in some cases amounting to torture.

Twelve of the accounts included claims that an Israeli interrogator “had threatened them or female relatives with sexual assault, such as rape and genital injury,” B’Tselem said.

The nature of the threats and violence also appears to be consistent. The most recent case bears similarity to the account of a 23-year-old Palestinian man in 2007, which appeared in a study published in 2015 by the journal Sexual and Reproductive Health Matters.

“They took off my trousers and underwear and shove[d] a pole into my behind,” the prisoner, whose identity is also undisclosed, told the Public Committee Against Torture in Israel (PCATI) at the time.

“They stopped when someone came in and asked what they were doing,” he added.

“A little later, the officer took me to the toilet, locked the door, sat me down and urinated on my face and body.”

The study looked at PCATI’s database during 2005-2012, and found that 60 of the 1,500 testimonies included accounts of sexual torture and ill-treatment by soldiers, police, intelligence personnel and jailers.

The case of the 23-year-old was the only one reportedly involving rape – with an object – although there were others that included threats of sexual assault or simulated sexual assault.

There were zero convictions related to any of the 60 testimonies – though one case was still pending at the time of writing in 2015.

Sexual violence against detainees is a form of torture, with lasting psychological effects. This form of violence includes verbal sexual harassment, forced nudity and physical sexual assault, according to the journal study.

The prevalence of sexual assault perpetrated against Palestinian prisoners by their Israeli captors is not fully known.

Additionally, the study relied only on the testimonies collected by PCATI.

Sexual violence remains generally underreported, no less in the case of Palestinians detained by Israel.

Palestinians may be reluctant to give their testimony out of fear of retribution, hesitant to give it to an Israeli organization, or may be discouraged by the stigma attached to being the victim of such violence.

In addition to the dangers and psychological costs of reporting such abuse, there is the scant prospect of receiving any justice even while bearing the emotional, time and financial costs of attempting to pursue a claim.

Such factors are known to discourage reporting of sexual crimes in many jurisdictions, but are particularly acute for Palestinians in a context where Israel’s military investigation system is a fig leaf for the occupation, affording Palestinians no access to justice.

While Israel’s high court supposedly outlawed torture in 1999, it ruled that the domestic intelligence agency Shin Bet can use torture in supposedly rare and exceptional “ticking time bomb” circumstances to investigate Palestinian prisoners.

Torture is absolutely prohibited internationally under all circumstances, and no such exceptions exist.

But Shin Bet has cited the “ticking time bomb” pretext to torture hundreds of Palestinians, according to Amnesty International.

Israel’s “ticking time bomb” loophole was cited by the CIA to justify the US government’s use of torture, a Senate inquiry revealed in 2014.

*The boy’s name is known to DCIP but is not disclosed here due to privacy concerns.