You Are Here: Home → Israeli historian thinks 1956 massacre was part of a secret plan to expel Palestinians 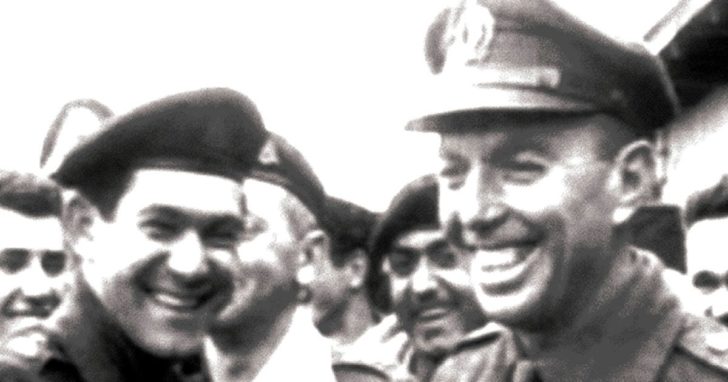 The highest Israeli officer tried for Israel’s 1956 Kafr Qasem massacre admitted that his trial was staged to protect Israeli leaders. An Israeli historian thinks the massacre was part of a secret plan to expel Palestinians from Israel

Israel’s Ha’aretz newspaper reports that the highest Israeli officer tried for Israel’s 1956 Kafr Qasem massacre admitted before his death that his trial was staged to protect military and political elites.

Israeli historian Adam Raz believes that a secret plan to transfer Israel’s Arabs was behind the 1956 attack, in which Israeli soldiers shot dead 19 men, 6 women, and 23 children (some reports give the total killed as 51). They were allegedly killed because they had violated an Israeli imposed curfew, of which they were unaware.

The Israelis who perpetrated the massacre were courtmartialed and convicted, but their sentences were soon commuted, they received presidential pardons and were released from jail. Some were awarded desirable jobs; Ben Gurion appointed the batallion commander head of security at the Dimona nuclear reactor.

The most senior defendant, Col. Issachar Shadmi, commander of the brigade in charge of the area, was fined 10 pennies for exceeding authority.

Until his death last month at the age of 96, Shadmi lived in a spacious home in an upscale neighborhood of Tel Aviv.

During the interview Shadmi said that the 1958 court case was “a show trial, staged in order to keep Israel’s security and political elite – including Prime Minister Ben-Gurion, IDF Chief of Staff Moshe Dayan, and GOC Central Command (and later chief of staff) Tzvi Tzur – from having to take responsibility for the massacre.”

The trial, Aderet reports, “was intended to mislead the international community with regard to Israel’s ostensible pursuit of justice.”

Shadmi said: “They explained to me that they needed to put me on trial, because if I had tried in my own country and convicted, even if I was fined only a penny, I wouldn’t go to The Hague…. If they didn’t prosecute me… I would be tried at The Hague. And that is something that neither I nor the country were interested in.”

Aderet writes that Shadmi said he was well compensated as a civilian for going along with the show trial: “I turned into a major Defense Ministry building contractor.”

Israeli historian Adam Raz has filed a lawsuit demanding that Israel declassify documents relating to the affair. He says:  “Most of the material is still classified. I was surprised to discover that it’s easier to write about the history of Israel’s nuclear program than about Israel’s policies regarding its Arab citizens.”

Raz believes that another reason for the show trial was to hide a secret program called “Operation Mole.” The goal was to expel Palestinians from the area. He says: “The public is familiar with the ‘Mole’ program only as a rumor.” says Raz; much of the documentation remains classified in the IDF archive.

Aderet writes: “Raz thinks one must see the Kafr Qasem massacre in this context: ‘The massacre wasn’t perpetrated by a group of soldiers who were out of control, as has been argued until today. From their point of view they were following orders, which in essence would lead to the expulsion of the villagers,’ he says. Or, in other words, they were operating in line with the directives of Operation Mole, as they understood them.”

Raz has written a book about the massacre scheduled to be published this month, but it appears it will only be available in Hebrew.